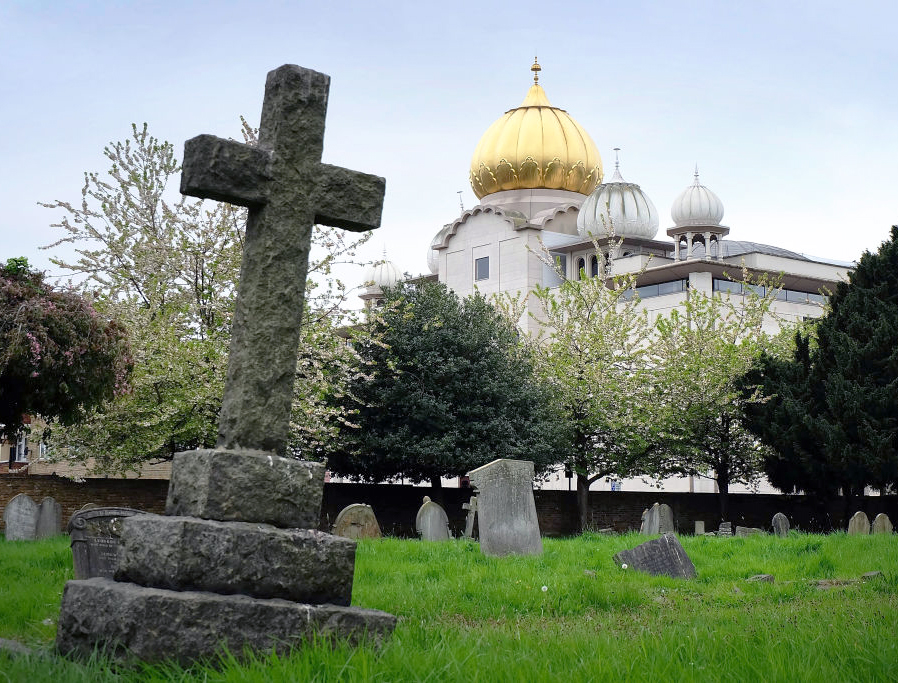 “When men choose not to believe in God, they do not thereafter believe in nothing, they then become capable of believing in anything.” —Émile Cammaerts

Most of us witness so many of the world’s terrible events from the safe distances of television, newspapers, the internet or radio.

On one night during the era of the Partition of British India (1947), Sadiq Khan, my grandfather, didn’t have such a luxury. He was riding on a train, in the land that was becoming West Pakistan. A frenzied mob stormed onto the car on which he rode. This Sikh mob began slaughtering those on the train car who weren’t Sikh. My grandfather, a Muslim, whom no one in my family had ever known to be pious, was wearing a hat.

“What are you?” the mob asked my grandfather.

My grandfather’s trembling fingers tapped the top of his hat. He didn’t have the knot of uncut hair above his head to prove he was Sikh.

Torchlights suddenly appeared through the windows. The wild roars of rival mob could be heard from outside. A Muslim mob was rushing to the rescue their own. The Sikh mob fled. My grandfather was the sole Muslim survivor of that train car.

Most of my mother’s brothers and sisters emigrated from Pakistan to North America. Geography hasn’t prevented them from following up on the news in the Indian subcontinent. Like the news here, much of what gets reported is bad news, including the occasional sectarian riots between Hindus and Muslims. I vividly remember being told, as a child, of the demolition of the Babri Mosque in Ayodhya, India, an event which was followed by much violence.

To the best of my knowledge, no one from my mother’s family, at least among those born in Pakistan, considers the Indian subcontinent to be an especially terrible place. It’s home to them. But they’re familiar enough with the land not to be overly fascinated by fantasies of the subcontinent, and stories such as my grandfather’s brush with an early death does much to prevent them from doing so. The Indian subcontinent isn’t some magical land where the enlightenment in the air is so thick that it can be cut with a knife.

The explosive growth of practices such as yoga and transcendental meditation does leave me with the strong impression that many, here in the West, do see the subcontinent as such a magical place where every tenth person is enlightened. Yes, it is the land where the Buddha hailed from, where theMahabharatawas written, where Gandhi led thesatyagrahamovement — a land adorned with shrines of Sufi saints. The Indian subcontinent is, without a doubt, a civilization with a wide-ranging spiritual heritage. It’s also a culture that most Westerners know rather little about, with customs and beliefs that are alien to the bulk of them.

The Indian subcontinent has 1.7 billion people — people who are every bit as confused, every bit as annoying (although culture can do much to guidehowany of us will be annoying), as we are right here. People there get every bit as much aggravated by their families and neighbors as we do right here. People there indulge in vices, and hold onto prejudices, just as we do right here. The average person struggles with inner peace everywhere. People do awful things to one another everywhere. To expectantly seek any place in the world where people cease to act like people is naïve.

Kumare,a brilliant 2011 documentary, demonstrates just how easily people who are enthused by their ideas of India can be manipulated — and a good number of self-proclaimed gurus do indeed manipulate their audiences. I, for one, find that popular ideas of India are far and away most amusing when self-help authors explain that by “karma-this” and “dharma-that,” the reader can “attract” prodigious wealth — akin to how Biblical passages are used to peddle the Prosperity Gospel. Does it occur to most of readers of such books that the countries where the termskarmaanddharmacome from aren’t wealthy at all?

I’m not an expert on “attracting” wealth, but I could share some practical advice on saving a few bucks: Don’t waste money on books like those.

If a speech by a great statesman, perhaps a Winston Churchill, were openly read to a “spiritual, but not religious” audience, only substituting the words “duty” with “dharma,” and “destiny” or “fate” with “karma,” could such an audience be persuaded that such words must be those of a great sage? I’m under the strong impression that for many of those who would brand themselves “great teachers of enlightenment,” the matter very much is something similar to that.

So where does all this fascination with an idea come from?

I sympathize, very much, with any person suffering from a restless spirit. I just as much sympathize with anyone who, surrounded by our secular and alienating culture, instinctually understands that the greatest questions concerning purpose and life are, and always shall be, spiritual matters. One of the books which helped guide myself towards reception into the Church was E.F. Schumacher’sA Guide for the Perplexed, a compelling read by an author whose own spiritual journey steered from atheism to Buddhism to the Catholic Church. It’s an outstanding demonstration that much may be gained when due regard is paid to the truths found in Eastern wisdom.

What I refuse to sympathize with is any rigid broadmindedness (a hallmark of political correctness and wokeness) that would bolster any New Age claims that great mystical and spiritual wisdom are things found everywhere else besides Christendom. It simply isn’t true.

“I don’t know why I’m here, or what I’m supposed to do,” a spiritual seeker may say about his life. “But surely, they’ve figured it all out over there,” he goes on to say, before indulging in the customs and a vernacular from a culture he knows next to nothing about.

The quest for inner peace can inspire a person to plant his rear on a pillow, close his eyes, and repeat the wordOmfor an hour straight, while he holds on to some incoherent notion of what enlightenment might even be. How often would it occur to that same person that, rather than chasing vague impressions about the other side of the world, he may very well have neighbors who find their peace by undergoing the far more practical step of walking to their local parish and sitting in the presence of the Blessed Sacrament, or by confessing their sins?

How much escapism is there in this trend of seeking “Eastern wisdom to Western problems?” How many seekers, wishing a saint’s patience for themselves, meditate in the hope of foregoing the actual practice of putting up with all of those local neighbors who aggravate them? Their neighbors have to put up with them, after all.

Is it an idea of the Middle Ages, an era more progressive than many of us are conditioned to realize, that would avert a spiritual-seeker from listening to any words of wisdom from the mouth of a Franciscan friar, that he would hang on to each and every word uttered by a Buddhist monk instead?

How many of those who would pride themselves in having readthe Bhagavad Gitacare about whatthe Gospel of Johnhas to say of humanity’s relation to God? Are books such asthe Cloud of Unknowingorthe Way of a Pilgrimlacking, in any way, as mystical guides? Is the poetry of Dante, Milton and St. John of the Cross somehow outmatched by that of Rumi? Would it occur to a person enthused by the life and teachings of Maharishi Mahesh Yogi (that guru who famously befriended the Beatles) that a culture he actually has some familiarity with produced a man as carefree as St. Francis of Assisi, or a woman who saw God in simple tasks as St. Thérèse of Lisieux did? Would a Westerner who, in great fascination, soaks up each and every detail he can about the Kumbh Mela, or perhaps the Hajj, demonstrate such enthusiasm for the miraculous events (and for the Church to confirm any such miracle is a very rigorous, and reasonable, process) which took place in Marian apparition sites such Guadalupe, or Lourdes, or Fatima?

Christendom has an incredibly rich mystical tradition, which very easily exceeds anything else the world would offer. Is it in any way lacking for its tendency to be presented in a vernacular more familiar? Or, worse, is there some large-scale aversion to mystical traditions that were pushed forward by men and women who had a concrete Creed, who had the nerve to insist that the historical facts of the Incarnation, Crucifixion and Resurrection of Our Lord were, in fact, facts? Are answers to life to be sought “anywhere buthere?”

There are so many who, feeling within themselves that great yearning for home, are ready and eager to search the ends of the earth to find their spiritual rest. The great irony is that they need not look so far.