The Feast of Saint John Vianney – a model for priests 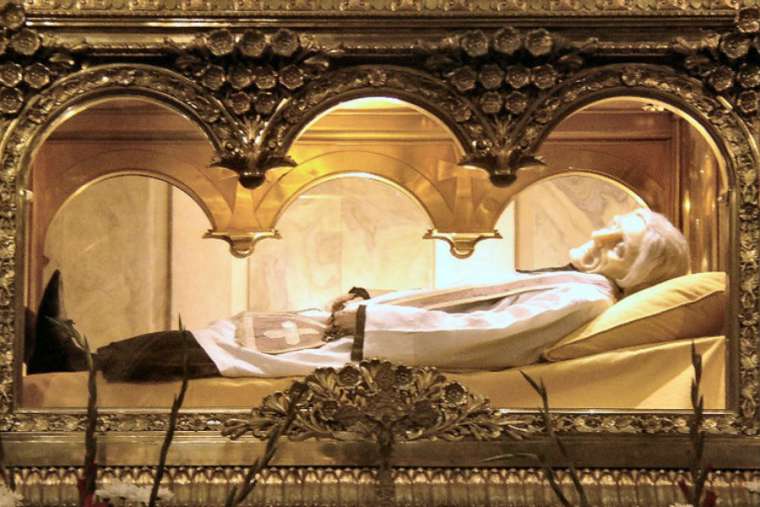 The Feast of Saint John Vianney – a model for priests

The patron saint of priests, St. John Vianney, died Aug. 4, 1859. A century later, Pope John XXIII reflected on the life of the saint, and what it means to be a holy priest.

In contemplating the life of St. John Vianney, one immediately thinks of a priest who lived out great penance, and whose “only motives were the love of God and the desire for the salvation of the souls of his neighbors,” John XXIII said.

The saintly pope reflected on the life of Vianney in an encyclical titledSacerdotii nostri primordia. The encyclical was written in 1959 for the 100th anniversary of Vianney’s death.

After struggling with his studies, St Vianney was ordained a priest in 1815. Shortly afterward, he was assigned to Ars, France, near his hometown of Dardilly.

There, he spent a majority of his priesthood. He was noted for his dedication to the poor, his counseling to those in need, and for founding La Providence, an orphanage for girls.

The saint was well-known for his dedication to the Sacrament of Penance. He would make himself available for confession for up to 16 hours daily.

“[The priest] is no longer supposed to live for himself…He must be aflame with charity toward everyone. Not even his thoughts, his will, his feelings belong to him, for they are rather those of Jesus Christ who is his life,” he wrote, quoting a sermon from Pope Pius XII.

“St. John Mary Vianney is a person who attracts and practically pushes all of us to these heights of the priestly life,” John XXIII further added.

The pope highlighted the three evangelical counsels of poverty, chastity, and obedience, which he said Vianney exemplified.

“His example in the various works of priestly asceticism still points out the safest path to follow, and in the midst of this example, his poverty, chastity and obedience stand forth in a brilliant light,” the pope said of Vianney.

“What great benefits are conferred on human society by men like this who are free of the cares of the world and totally dedicated to the divine ministry so that they can employ their lives, thoughts, powers in the interest of their brethren!”

Pope John XXIII said St. Vianney, who was a member of the Third Order of St. Francis, clearly lived a life of poverty. He noted the saint’s heavy mortifications – restraining himself from food, sleep, and other personal belongings.

“This detachment from external goods enabled him to offer the most devoted and touching care to the poor,” said the pope.

“He passed a life that was almost completely detached from the changeable, perishable goods of this world, and his spirit was free and unencumbered by impediments of this kind, so that it could always lie open to those who suffered from any kind of misery.”

Similarly, Pope John XXIII wrote, the preservation of chastity breaks the restraints of self-interest and grants a person greater dedication to those in need.

“St. John Mary Vianney has this pertinent comment to make in this regard: ‘A soul adorned with the virtue of chastity cannot help loving others; for it has discovered the source and font of love –God.’”

The pope also pointed to Vianney’s dedication to the virtue of obedience. The saint, he said, had desired a contemplative life rather than the heavy burden of pastoral duties, but he still remained obedient to the bishops.

“All his life he longed to lead a quiet and retired life in the background, and he regarded pastoral duties as a very heavy burden laid on his shoulders and more than once he tried to free himself of it,” the pope said.

While God never allowed him to achieve this goal, it was certainly God’s way of forming the saint in the virtue of obedience, he said.

He also highlighted Vianney’s prayer life and devotion to the Eucharist, as well as his commitment to the Sacrament of Confession.

Pope John XXIII said Vianney “habitually restrained his own will” to further dedicate himself to the Church. He expressed hope that this fire for the Church which consumed Vianney may also consume all priests.

“It is said that St. John M. Vianney lived in the Church in such a way that he worked for it alone, and burned himself up like a piece of straw being consumed on fiery coals. May that flame which comes from the Holy Spirit reach those of Us who have been raised to the priesthood of Jesus Christ and consume us too.”