The Jesuit Priests Who Survived Hiroshima 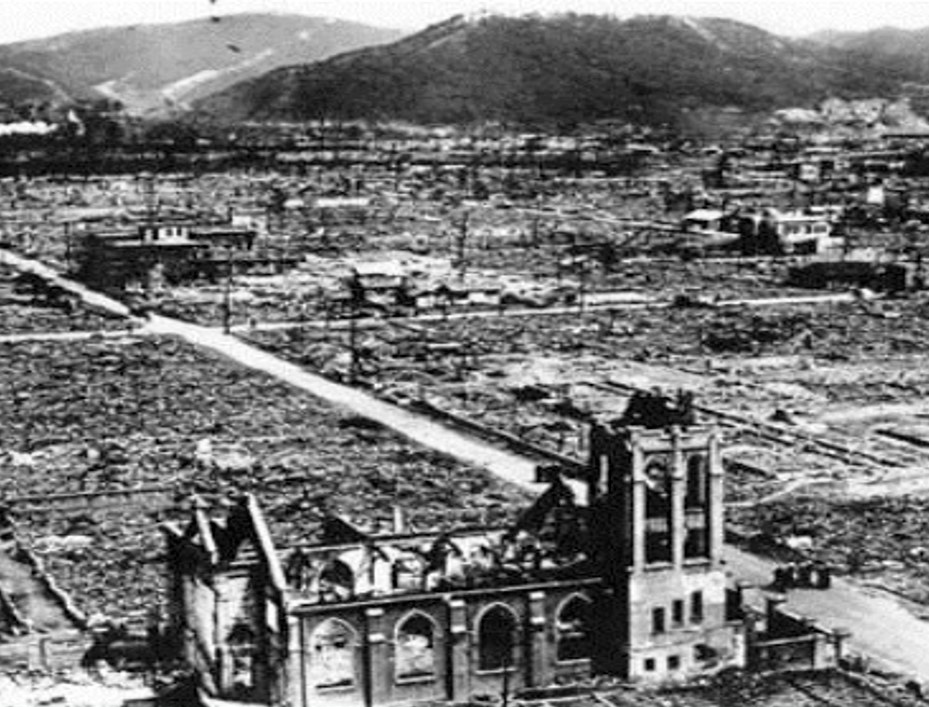 The Jesuit Priests Who Survived Hiroshima

In the midst of the devastation, eight Jesuit missionaries who were in their rectory survived.

Seventy-five years ago — on Aug. 6, 1945 — a B-29 Superfortress named the Enola Gay struck out across the Pacific and dropped a uranium-235 atomic bomb on Hiroshima, Japan. The bomb, code-named “Little Boy,” flattened buildings for miles in all directions. Tens of thousands of people were killed instantly. That strike and the subsequent atomic bomb attack by the U.S. on the city of Nagasaki three days later brought an end to World War II, as the Japanese military leaders realized that they could not win.

But in the midst of the devastation, near the hypocenter of the attack, eight Jesuit missionaries who were in their rectory survived. Four of the priests whose lives were spared are known by name: Father Hugo Lassalle, Father Wilhelm Kleinsorge, Father Hubert Schiffer and Father Hubert Cieslik sustained only minor injuries from shattered windows. None suffered hearing loss from the explosion. Their church, Our Lady of the Assumption, suffered the destruction of its stained glass windows but did not fall; it was one of only a few buildings left standing in the midst of widespread destruction.

Not only were the clerics kept safe from the initial blast — they suffered no ill effects from the harmful radiation. Doctors who cared for them after the blast warned that radiation poisoning to which they had been exposed would cause serious lesions, illness and even death. But 200 medical exams in the ensuing years showed no ill effects, confounding the doctors who had predicted dire consequences.

Father Schiffer, who was only 30 years old when the bomb was dropped on Hiroshima, told his story 31 years later, at the Eucharistic Congress in Philadelphia in 1976. At the time, all eight members of the Jesuit community who had lived through the bombing were still alive. Before the gathered faithful, he reminisced about celebrating Mass in the early morning, then sitting down in the rectory kitchen for breakfast. His memories were vivid: He had just sliced and dug his spoon into a grapefruit when there was a bright flash of light. Speaking before the Eucharistic Congress, he said that at first, he thought it might be an explosion in the nearby harbor. Then he described the experience:

Suddenly, a terrific explosion filled the air with one bursting thunder stroke. An invisible force lifted me from the chair, hurled me through the air, shook me, battered me, whirled me round and round like a leaf in a gust of autumn wind.

More details have been reported by a priest who once met Father Schiffer at the Tri-City Airport in Saginaw, Michigan. Father Schiffer visited the state to give a talk before the Blue Army, an organization that promotes the apparitions at Fatima. The priest recounted their conversation:

The next thing he remembered, he opened his eyes and he was lying on the ground. He looked around and there was NOTHING in any direction: the railroad station and buildings in all directions were leveled to the ground. The only physical harm to himself was that he could feel a few pieces of glass in the back of his neck. As far as he could tell, there was nothing else physically wrong with himself. Many thousands were killed or maimed by the explosion. After the conquest of the Americans, their army doctors and scientists explained to him that his body would begin to deteriorate because of the radiation. Many of the Japanese people had blisters and sores from the radiation. To the doctors’ amazement, Father Schiffer’s body contained no radiation or ill-effects from the bomb. Father Schiffer attributes this to devotion to the Blessed Mother, and his daily Fatima Rosary. He feels that he received a protective shield from the Blessed Mother which protected him from all radiation and ill-effects. (This coincides with the bombing of Nagasaki where St. Maximilian Kolbe had established a Franciscan Friary which was also unharmed because of special protection from the Blessed Mother, as the Brothers too prayed the daily Rosary and also had no effects from the bomb.)

Father Schiffer and the other Jesuits were examined and interviewed repeatedly by scientists, medical doctors and others who could not understand why they had escaped injury. Father Schiffer reportedly said that he himself had been interviewed 200 times. Asked why they believe they were spared, when so many others died either from the explosion or from the subsequent radiation, Father Schiffer spoke for himself and for his companions:

We believe that we survived because we were living the message of Fatima. We lived and prayed the Rosary daily in that home.

A dramatic reconnaissance photo captured shortly after the bombing shows Father Schiffer’s church, standing alone amidst the devastated city. There in the street stand four of those faithful Jesuit priests, gazing across the miles of flattened homes and businesses toward the horizon, and giving thanks that God had spared them to continue in his work.