The Lamp: Why these Catholics are creating a print magazine in a digital age 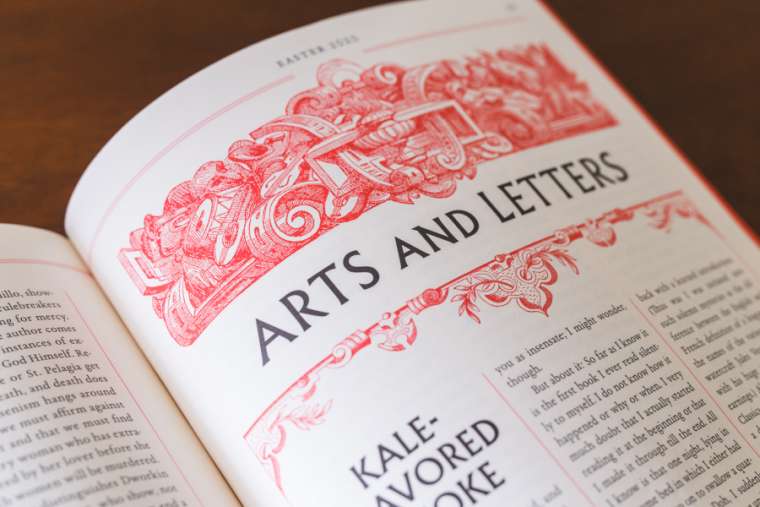 The Lamp: Why these Catholics are creating a print magazine in a digital age

When Thomas Earnest Bradley wrote and edited The Lamp, a 19th century British Catholic periodical, he did so largely from his cell in debtors’ prison, “that horrible institution that existed in those days.”

Bradley sold his magazine for a penny, a fifth of the price of his competitors, and his definition of Catholic was broad.

“It ran articles on themes that were not always, in a narrow or straightforward sense, Catholic topics,” Matthew Walther told CNA.

“They would run a story about some new scientific innovation or about a book or a play, that was not by a Catholic or didn’t have in any ostensible way a Catholic theme.”

That version of The Lamp has been defunct for years. But it was, in part, the inspiration for a new Catholic magazine by the same name, with the same logo.

Walther, a journalist, and his friend William Borman (friends call him Billy), foundedThe Lampmagazine in the United States this past year with similar goals in mind: “a magazine that was sort of witty and urbane, in a way that was not shrill or grating to read, that tried to speak to the full range of what the Church teaches,” Walther said.

“We’re operating under the assumption that anything that is good, true and beautiful falls within the purview of what should be in a good Catholic magazine,” he said.

Borman added that it is not a carbon-copy of the original Lamp magazine, which was “basically a working class daily magazine,” with a penchant for “scientific articles, almost like a Popular Science.”

But the use of similar aesthetics, along with an equally-broad idea of what kinds of topics qualify as Catholic, gives the magazine “a throwback flavor. A little picture of the oil lamp burning on the cover is the same picture (as the original), with a slight modern twist,” Borman said.

But Walther and Borman would argue that it does not already exist. Not in the way they envision.

“(T)here really is no such thing, in an otherwise pretty wide and diverse landscape of Catholic media in the English-speaking world, something that is actually a magazine as opposed to a website or a newswire or what have you that is orthodox, without naming any names,” Walther said.

That’s what The Lamp hopes to be. A magazine faithful to the magisterial teaching of the Catholic Church that covers all manner of things from a Catholic point of view. It will cover politics – though only broader political ideas, and not so much the “shrill horse-race” of particular elections. It will cover goings-on in the Church, but not in the way of “Can you believe this bishop did this? Oh my goodness,” Walther said. No pope-bashing, and no ultramontanism either.

So what kinds of stories is the new Lamp magazine interested in?

“We wanted something that would also tell people interesting (we hope), and at times encouraging or moving stories about parts of Catholic life that are ordinary, but also, not talked about very much. Things like the history of rural parish churches, or the lives of someone like the man in the first issue who served several decades of an unjust prison sentence.”

The latter is told in the first issue of The Lamp, in which author Brandon McGinley tells the story of Jeff Cristina, who served a 40 year sentence for a wrongful conviction of murder as a juvenile. Cristina, nominally Catholic when his sentence began, returned to the sacraments and brought many others with him during his years behind bars.

“The story had been on my desk for a while and I didn’t have a home for it,” McGinley told CNA. But when Walther and Borman, friends of McGinley’s, started The Lamp, “they were really kind to offer it a home.”

McGinley is a Catholic speaker, and author of The Prodigal Church as well as a contributing editor to Plough Quarterly. Like the founders of The Lamp, McGinley believes that the magazine is filling a previously empty niche in Catholic media – a niche for longform journalism that is “broad both in the kind of content, the topics that they cover, and in terms of the specific points of view that they’re bringing in (while) still being faithfully and integrally and genuinely Catholic.”

“And it’s fun,” McGinley added. “In the opening section, the ‘feuilleton’ (a French word for the opening section of a magazine with short, light literature), Matthew is just hilarious. They have fun with this, it’s not joyless.” As an example, one of the sample articles on The Lamp’s website is “The Bull Against Open Letters” (or, The Open Letter Against Open Letters), which the author declares are the “most revolting, foul, noxious, poisonous, blasphemous, vicious, wicked, deceitful, covinous, Brummagem, catch-penny Pamphlets…offensive to to men, women, holy priests, deacons, sub-deacons, porters, lectors, exorcists, acolytes, virgins, wives, sons, daughters, suckling babes, lawyers, practitioners after physick, and others, we hereby declare anathema these selfsame base cullions, rascals, apes, dogs, shoes, &c. who have addressed themselves to the baptized under the supposed appellation of ‘Open Letters.’”

The aforementioned letter, as well as a handful of other sample articles, appear onThe Lamp’s website- but not much else does, as the publication is primarily a print magazine, a decision Borman and Walther are well aware was a risky one in a digital age.

“We’d heard (that print was dead), but we are both unfortunately terrible book collectors,” Borman said. “And so we’re maybe just in the habit of thinking that print is superior to online or to digital.”

“That costs money, but we found people have been plenty willing to pay it,” Borman said. They’ve thus far had successful fundraisers – some online, due to the pandemic – and have attracted readers, primarily between the ages of 25-45, from all over the world, from “New York and Washington to London, Australia, and India.”

The first issue of the bi-monthly magazine came out in Easter, at the height of the global coronavirus lockdowns, an unforeseen challenge when the idea for The Lamp was conceived, Borman said. It delayed their first issue and caused some shipping snafus, but otherwise did not have too big of an impact.

Besides having an affinity for physical copies, a print magazine also helps further the goals of The Lamp, Walther said – it’s a beautiful object people can hold in their hands that prompts them to slow down and enjoy what they’re reading, something that they’d want to save and display on their coffee table or bookshelf. Borrowing a phrase from Cardinal Robert Sarah, Walther said a print magazine helps elevate The Lamp above the “culture of noise.”

“The great upside in online journalism is that now people, no matter where they are, if they have access to an internet connection, they can read as much as they want from as many different voices or perspectives as possible, 24 hours a day, seven days a week, 365 days a year,” Walther said.

“And the downside of online journalism is all of those things, because it becomes this cycle in which you get caught up in and you can lose sight of more important things when you’re immersed in not even day-to-day, but hour-to-hour, minute-to-minute-cycle in journalism,” he said.

“We wanted to create something that will allow people to step away from the computer for an hour or two, put their feet up, and have a drink and immerse themselves in something very different, something slower, and, we hope, maybe a little bit more thoughtful, and less animated by the kinds of concerns that prevail in the online media infrastructure,” he said.

The desire to rise above divisiveness is key to The Lamp’s identity, Borman added.

“I think that people today more than ever are growing tired with the constant outrage and the relentless attention to partisan (politics) sometimes at the expense of the faith,” he said.

“We are attempting to be a kind of an anomaly in an age of a barrage of constant information – where we publish six times a year and we print very few illustrations in here,” he said.

“I think that people are really hungry for it, and the response we’ve gotten has confirmed this for us. They’re hungry for an approach to life in the light of the faith that takes its reader seriously and gives them serious ideas to think about.”

McGinley agreed that The Lamp is “breaking the mold” of the deeply-entrenched partisan rhetoric that can be found on social media today.

“It’s not on a team, that’s the first thing I think about it,” McGinley said.

“The content you’re going to find in this magazine, in this journal, is not going to be easily identifiable with any currently existing alliance in Catholic politics and politics generally,” he said, noting that thus far the magazine has included pieces from a Jewish Marxist alongside those of Catholic scholars.

So far, Borman and Walther have found contributors to the magazine from among their friends and connections, but they also accept cold submissions. They’re looking for pieces that are entertaining, edifying, moving, and thought-provoking.

“Apart from the obvious goals that any magazine would have, which is producing something that readers will enjoy, I think what we really want is to encourage people to lay aside secular prejudices and really think through what it means to approach our political and cultural issues with the mind of the Church,” Walther said.

Ultimately, he said, “we just want people to try to think like Catholics.”

Judge killed by mafia 30 years ago...