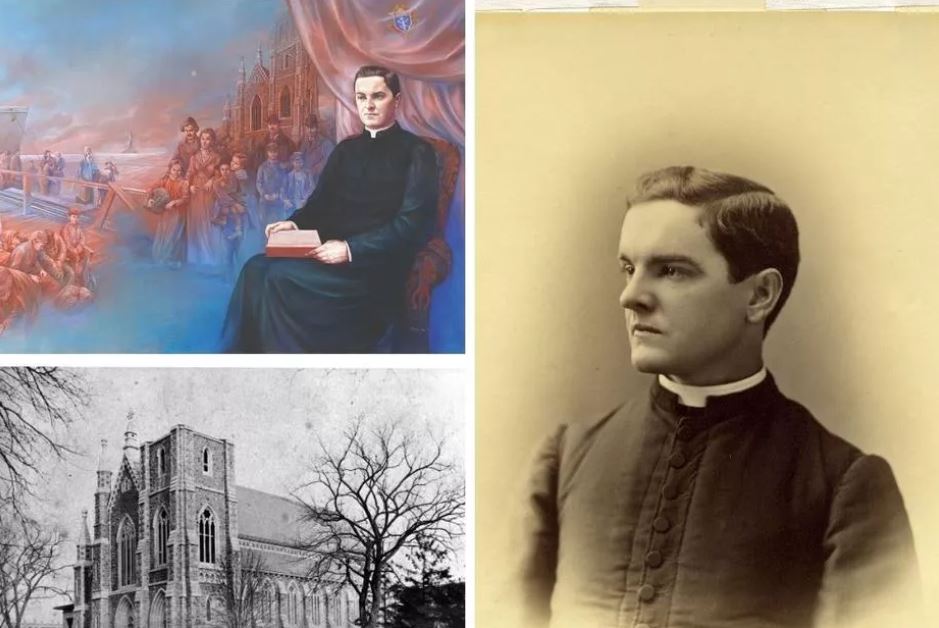 The ‘Protector of Christian Family Life’ is heralded ahead of his beatification.

On Oct. 31, at St. Joseph Cathedral in Hartford, Connecticut, Father Michael J. McGivney will be beatified, 23 years after the opening of his cause in 1997 in the Archdiocese of Hartford.

On May 27, Pope Francis approved a decree recognizing a miracle attributed to his intercession, involving an unborn child who was healed in utero of a life-threatening condition in 2015.

Although Father McGivney died two days after his 38th birthday in 1890, he’s considered a saint for our times.

“Father McGivney had a great love for the needs of the family. The unity of the family was very important to him,” Father James Sullivan, rector of the Basilica of the Immaculate Conception in Waterbury, Connecticut, Father McGivney’s hometown, told the Register.

As a spiritual father, Father McGivney was concerned with Catholic families’ spiritual and physical needs, seeing them through serious financial situations during those times; he provided insurance to these families as well as to widows and orphans, but more importantly he provided them a framework for unity as faithful Catholics. It is this spiritual provision, Father Sullivan said, which remains the more vital part of Father McGivney’s legacy.

“Father McGivney emphasized the unity of the family and the necessity of an intact family,” Father Sullivan said.

In seeing the relevance of Father McGivney for our times, Dominican Father John Paul Walker said another characteristic of his time was the plight of immigrants. Father Walker is pastor of St. Mary Church in New Haven, Connecticut, where Father McGivney was first assigned and where he founded, in 1882, the Knights of Columbus, which today numbers nearly 2 million men plus their families.

This situation tied directly into family problems. “One of the biggest parts of his ministry was reaching out to broken families, often because the father died at a very young age, leaving those children without a father figure,” Father Walker explained. “The causes today might be different, but many families in our country today are without a father figure. All these parallels are realities Father McGivney faced every day — the realities we face. Watching and learning from him how he served those needs in his day help us how to understand to serve people better with these needs in our day.”

That model earned him the title of “Protector of Christian Family Life.”

Knight of Columbus Brain Caulfield, vice postulator for the cause of canonization for Father McGivney, told the Register that of the many reports he receives of favors granted through asking Father McGivney’s intercession, most fall into four categories. “These are the areas he was concerned about when he was a priest on earth.”

Second, intentions often focus on employment and finances. Caulfield said the testimonies comes in regularly; even surprisingly, a recent one from Spain, where there is no presence of the Knights of Columbus, was sent along. A man wrote from Barcelona to say he was unemployed for two years and walked into a church to pray and found an old newsletter about Father McGivney. Reading about the favors Our Lord was granting through him, he wrote that “before the Blessed Sacrament, together with the Venerable, I asked the Almighty Father to hear our prayer.” When he left the church, he “was called for a job interview.”

Another man in California wrote that, after five months without a job, he began praying for Father McGivney’s intercession to help him find “a job to protect my family. Within two weeks I had a job offer.

Third, petitioners seek a return to the faith. One reason Father McGivney founded the order of the Knights of Columbus was to keep men from joining anti-Catholic secret societies, such as the Masons, promising financial benefits. Today people continue to fall away from the faith for many reasons. In one case, a person prayed daily for two weeks for Father McGivney’s intercession for a family member to return to the Catholic faith. The result was that, “after 30 years away, they have returned and now sit beside me every Sunday in Mass,” according to the recounting the Knights of Columbus received.

Fourth is the serious issue of substance abuse. In his day Father McGivney countered alcohol problems by founding a total abstinence society. Today’s harms include opioid and other addictions. “Usually a parent is praying for a child for that and getting results,” Caulfield said.

Favors reported by the Father McGivney Guild (FatherMcGivney.org) also include many physical healings, everything from back pain to cancer to eye problems.

After the beatification, Caulfield is expecting “a huge groundswell of people praying for favors and reporting them.

At the same time, Father Walker finds Father McGivney “a visionary in the way he involved the laity, with laymen really in the leadership role. He was far ahead of his time in that aspect. The Knights of Columbus was not to be an organization run by priests with laymen just following along, but an organization run by laymen in all the relevant positions of leadership.”

Father Walker added, “Father McGivney recognized a crisis of Catholic manhood and really challenged the Catholic men of his parish to step up and take leadership of the faith in their families and in their parishes.”

Caulfield explained that Father McGivney was very interested in building up fatherhood. “He saw many men in his day being drawn away from the faith and knew the father was so important to the financial help of the family and the spiritual and emotional health of the family and children. He saw the father as the key figure.”

According to Caulfield, Father McGivney would lead his men to serve like Christ. “The first principle of the Knights is charity, initially introduced in your family, where it starts.

Caulfield added that the fraternal aspect of the Knights is something from which men benefit. “Father McGivney knew men need [friendship with] men to a degree for affirmation and approval.”

Father Sullivan, who was once a parishioner at St. Thomas Church in Thomaston, Connecticut, where Father McGivney was pastor when he died, is of the same mind. “Men need heroes. We need spiritual heroes. … And all the statistics show that when a man is living a life with a relationship with Christ, the entire family benefits. When a man does not, very often the entire family does not. And children want to see their own father as a hero. They want their fathers to be a hero — a spiritual hero. They want to know you are living for something beyond yourself — namely God. When men get the spiritual life right, the entire culture will be elevated. Father McGivney saw this.”

Bob Ransom, whose wife, Margaret, is Father McGivney’s great-grandniece, believes “Father McGivney is a perfect saint for today because of his focus on protecting the family. That has always been and continues to be a primary role of a strong husband and father.”

Added Ransom, “Father McGivney’s charism, strength of character, humility and focus on being an apostle of the Christian family should be an inspiration to all Catholic men to be strong, loving and compassionate husbands and fathers.

Priests are also very excited about his beatification, explained Father Sullivan. “It gives us a spiritual lift because we have a mentor from our own diocese that we can emulate. He was very practical,” serving the “practical needs of the family. He was a parish priest, not a theologian, not a college professor. For us priests it is beneficial to look at our simple parish priest who accomplished so much by cooperating with God’s grace.”

Father Sullivan sees these benefits because he has been devoted to Father McGivney since he was 18 years old and a Knight at Providence College. When he was 21, he, two of his brothers at the college, and four others there were altar servers for the Mass transferring Father McGivney’s body to a new tomb at St. Mary Church.

This is something to which the beatification miracle of baby Mikey Schachle being healed in utero attests.

The Schachle family — Mikey is their 13th child — underlines the “importance of the domestic church,” Caulfield noted. The family “home schools and brings Christ every day into the home.

In his work as vice postulator, Caulfield said, “Every day my faith is renewed” by seeing “the ordinary faith of average Catholic people looking for God’s help, and they see Father McGivney as someone close to God who lived an exemplary life and who devoted his life to others. They see him today as someone to call upon to ask God for certain favors. When they get answers, it’s amazing to see how they write in, as to a dear friend.”

Often the people begin their letter or note with “‘Dear Father’ and end with, ‘Thank you, Father McGivney.’ It’s very personal for them.”

Indeed, it was very personal for John Palmieri, a Knight for 32 years, and his wife, Alana, who are dedicated to praying the Rosary and a prayer to Father McGivney. At Eastertime, both came down with the coronavirus a day apart and ended up in the hospital. He was put into a medically induced coma and on a ventilator in the ICU for several days. While still there, his wife was released.

“I was close to being dead,” he told the Register. Once home and for two weeks on oxygen, he continued to recover. He said that his recovery is a testament to the power of prayer. “We were doing the Father McGivney Prayer and the Rosary,” he said. “All the prayers helped,” he said, including those of his brother Knights.

To the Knights especially, Father McGivney is “someone still alive in our hearts and councils,” Caulfield concluded. “He’s not someone distant who lived centuries ago, but a saint we Knights feel we can talk to as a friend.”

In Poland, Clash Erupts Between Cu...

The Peril of Rendering to Caesar W...