The Little Catholic School That Could Aids the Napa Community 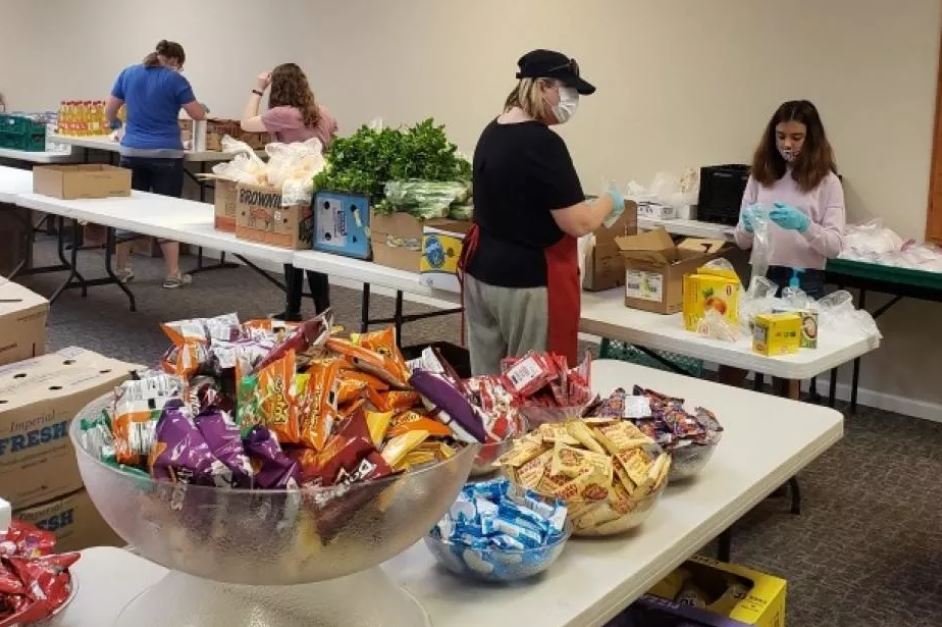 The Little Catholic School That Could Aids the Napa Community

NAPA, Calif. — How can a small Catholic school with limited resources respond to a pandemic that has decimated the wages and threatened the health of parents and neighbors?

If you’re Kolbe Academy & Trinity Prep, a K-12 school based in Napa, California, you offer a weekly supply of groceries to 200 families struggling to survive the downturn’s impact on hotels, restaurants and vineyards. Never mind that your student body is tiny, with just 125 children and teenagers enrolled, and that finances are in tough shape.

Young students get involved helping out at the Agape Food Program.(Photo: Anna Hickey)

Ana Montiel, a Catholic mother of four who has experienced COVID-19 firsthand, knows what a small school community can do, when parents, teachers and administrators band together in a crisis.

“We are blessed,” Ana Montiel told the Register, as she reflected on the tuition assistance, groceries and practical support she has received from the school’s Agape Food Exchange program since the pandemic led the state in March to temporarilyshut down much of California’s economy.

As the Napa Valley Wine Country’s once-thriving tourism and hospitality sector ground to a halt, Ana Montiel’s part-time work at a winery was suspended, while her husband’s hours were sharply reduced at his restaurant job. Then both husband and wife were infected with the coronavirus, and Alejandro Montiel sought emergency medical treatment at the local hospital.

The Montiels’ mounting troubles were enough to send many working families into a downward spiral, with hunger and homelessness a growing possibility. But friends from their children’s school and parish community stepped forward, reminding the family that they were not alone.

“At this time, we are not worried about food because the Agape program has helped us with that,” said Anna Montiel in Spanish.

Then, barely holding back her tears, she recalled the family’s battle with COVID and the rush of hope she felt as teachers from her children’s school “came by the house and dropped off food for us.”

Agape was launched within weeks of the COVID shutdown, after Kolbe-Trinity school board member Anna Hickey realized that many families and others in the area needed immediate help to survive the pandemic’s toll.

Hickey is the president and CEO of Rodgers Vineyard in Napa Valley, a family-owned company started by Portuguese immigrants who settled in the area in 1869. Her children attended and thrived at the school, which provides a classically-oriented curriculum.

After Hickey quietly adopted families that needed groceries, she was touched by their gratitude and troubled by the fact that many had no other source of food while the lockdown dragged on.

She broached the idea of a grocery giveaway program with Kolbe-Trinity’s headmaster, John Bertolini, and other school leaders.
They decided to offer a more substantive supply of groceries for school families in need and asked for donations from parents who could help and from several local churches.

“In the first few weeks of April, we had 60 families, with an average family size of seven,” Hickey said.

“We gave them groceries for a week, along with shampoo and other personal supplies.”

They named the fledgling program the Agape Food Exchange, she said, because “in Greek, agape means love for love’s sake, and it is the highest form of love.”

In a recentmessageto the school community that asked for help with grocery distribution on Labor Day weekend, she described agape as “a sacrificial love that voluntarily suffers inconvenience, discomfort and even death for the benefit of another without expecting anything in return. “

This word, she added, “seemed the perfect title for a program designed to serve the needs of our neighbors with no judgment, political sway or personal opinions — just love.”

The program now serves about 200 families on average, with donated food and supplies distributed every week.

“School families with means are matched with those who are in trouble,” she added, noting that participants’ privacy is protected.

A restricted fund to help struggling families has also been established. Every penny aids the dishwashers, maids and other hotel and restaurant workers who have heard about Agape through local parishes and reached out for help.

“They often leave us notes that express what the program has meant for them,” said Hickey.

As the program has gained traction, it has drawn additional support from local religious orders, like theMarian Sisters of Santa Rosa, as well as other church and county agencies.

“This is bigger than a school program,” said Headmaster Bertolini. “We are also getting help from the Mormon community and the wine industry.”

The broader goal, he said, “is to help people realize that those who can help this week might need help next week. Everyone needs to be treated with dignity, no matter their circumstances.”

The love, care and humility that brought this program to life are informed by Kolbe-Trinity’s own struggle to survive the COVID storm that hasshutteredan estimated 150 Catholic schools in the U.S.

In Napa, the pandemic and devastating fires have created fresh burdens for Catholic-school parents who are Mexican immigrants and moved to the area to build a better future for their families.

The immigrant families enrolled at Kolbe-Trinity are relatively large and often deeply involved in the local parish, said Bertolini.

But even before the pandemic, some had trouble reserving funds for tuition, as the high cost of living pushed monthly rent for a one-bedroom apartment to $1,900 or more.

With local unemploymentnow at 10%,and many parents still facing reduced work hours, some have decided to send their children to public school, and others have left the area.

However, problems with remote learning at public school have also generated fresh enrollment in private educational institutions. And after the second Catholic school in three years closed in Napa, a number of students transferred to Kolbe-Trinity, which plans to hold onsite classes for some lower grades in the short term.

As the school welcomes an influx of non-Catholics, Anna Hickey hopes that more local families will see the value of Kolbe-Trinity’s “classic liberal arts education.”

“It gives children the opportunity to get into the meat of academic subjects and learn to form their own ideas through logic, surrounded by a God-centered community,” she said.

And she suggested that the school’s no-frills approach has kept faculty, students and parents focused on the essential mission of Catholic education.

“Our high-school kids don’t have everything other schools have,” she said, but they see the school as “an extended family and a safe place where they can form their own opinions and practice their faith. That is not always the case” at other local schools.Hickey and Bertolini acknowledged that the school still faces serious financial challenges.

But that hasn’t stopped this Catholic community from finding unexpected strength in the deep faith that animates its mission and makes the Agape Food Exchange possible.

A long line outside the Agape Food Program of local residents waiting for the doors to open.(Photo: Anna Hickey)

Ana Montiel has received the fruits of this apostolic work and experienced its healing power as her family begins to rebuild, even as program volunteers say they have found inspiration from the “heroic” example of families like hers.

Once Ana feared that her children would not be able to cope with the surge of anxiety that has shadowed much of daily life during the pandemic. But they have “matured” and become more helpful and prayerful, she said.

“I asked my oldest son, a high-school junior, if he was scared for his dad,” she said, reflecting back on her husband’s battle with COVID.