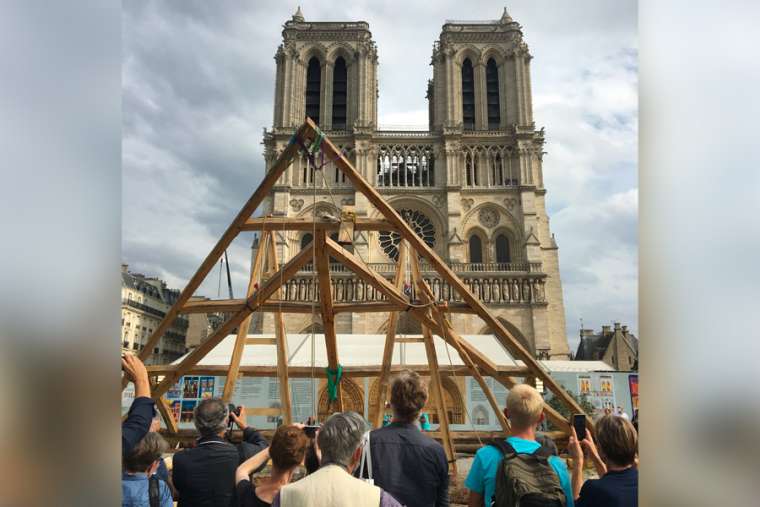 After fire toppled the iconic spire and destroyed the roof of the Notre Dame Cathedral in Paris, France in April 2009, heated debates ensued about whether the reconstruction should use the church’s original design, or use a more modern design and technique.

Some proposed futuristic ideas included a rooftop swimming pool and a greenhouse atop the 850-year-old cathedral.

Last year, the French Senate passed a bill mandating that Notre-Dame be rebuilt as it was before the fire, with lumber and medieval carpentry techniques, which were highlighted in a public demonstration Saturday in the cathedral’s square.

“It shows…firstly that we made the right choice in choosing to rebuild the carpentry identically, in oak from France,” Gen. Jean-Louis Georgelin, who heads the reconstruction efforts, told the AP.

“Secondly, it shows us the…method by which we will rebuild the framework, truss after truss.”

The public carpentry demonstration was held Sept. 19 as part of European Heritage Days. The triangular truss highlighted at the event was the seventh of a total of 25 new trusses that will be installed in the nave of the cathedral during the rebuild.

Carpenters told the AP that they selected a truss with a more complex design for the event. The truss, built in July, was raised from the ground for display at the event using a pulley system. Once raised, a celebratory oak branch was tied to the top, a traditional “symbol of prosperity and a salute to the workers,” according to the AP.

“It’s a moment to see ancestral techniques that last. There is the present and the past and it links us to our roots,” Romain Greif, an architect attending the event with his family told the AP. “It’s an event.”

The trusses will be installed in the roof of the church at a yet unknown date. French president Emmanuel Macron has said he wants the reconstruction to be completed by 2024, when Paris is set to host the Olympics.

Last year on the evening of April 15, 2019, a major fire broke out at the cathedral, destroying the roof and the spire. Shortly after midnight April 16, firefighters announced that the cathedral’s main structure had been preserved from collapse.

The major religious and artistic treasures of the cathedral were removed as the fire began, including a relic of the crown of thorns.

Originally built between the twelfth through fourteenth centuries, the landmark cathedral in the French capital is one of the most recognizable churches in the world, receiving more than 12 million visitors each year.

Its original spire was constructed in the 13th century, but was replaced in the 19th century due to damage.

The cathedral was undergoing some restorative work at the time the fire broke out, though it is unknown if the fire originated in the area of the work.