The Month of November is a Lesson in Ecclesiology 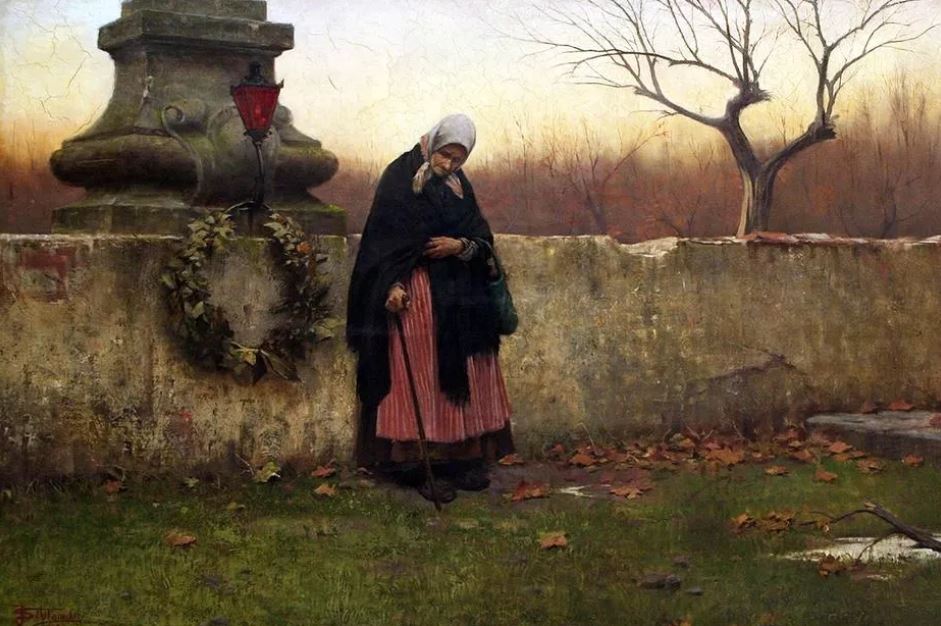 The Month of November is a Lesson in Ecclesiology

November reminds us that there have been many others at the same work of salvation that we are, praying many of the same prayers that we do, going to the same Mass that we do, receiving the same sacraments that we do.

“Ecclesiology” is that sub-field of theology that studies the Church. November — starting with its first two days — is a lesson in ecclesiology.

I say that because Nov. 1 (All Saints Day) and Nov. 2 (All Souls Day), and all these days of November that follow, tell us a lot about the Church — and demand that we expand our horizons about just what the Church is.

The Church is of this world and yet not of this world. It is physically present here and now. It has to be. There has to be a Church.

Why? The very logic of the Incarnation demands it. By “coming down from heaven, taking flesh, being born of the Virgin Mary, and becoming man,” the Son of God also became incarnate in the human limits of space and time.

Jesus’ Resurrection showed us how, freed from sin, the human person can also transcend space and time, which we will all experience at our deaths because, on entering eternity, time ends for us. But, until then, even if Jesus’s Real Body is now beyond space and time, mine isn’t. So how am I, in 21st-century Virginia, going to connect in the full reality of my being — soul and body — to that Jesus?

Just as Jesus, by becoming incarnate, became the sacrament — the visible sign in the world — of his Eternal Father, so Jesus becomes incarnate through the sacraments which physically wash, strengthen, feed, join and bid farewell to us. But the sacraments, which make Jesus present, are not floating somewhere out there in space. They become present here and now in and through the Church, which is the sacrament of Jesus made present to me in my big city or little town right now.

So, we need a Church in this world: the “Church Militant,” the Church fighting for salvation, a contest whose outcome in our own individual cases is still … out.

But the Church as the community of those who love God is not limited to just this world. The Church does not exist for itself. It’s not an end in itself. It exists to bring us to God which, for us, means salvation.

The outcome of the contest of life has already been decided for untold numbers of people. We dare to hope that for many it was successful. They are in heaven. They remain part of the community of those who love God. They are the Church Triumphant.

If Pentecost is the birthday of the Church, All Saints Day is a special party day, a kind of celebration of achievement. It’s good to be reminded every now and then (like, yearly) what we’re working for. Smart bosses do things with their employees to build esprit de corps. All Saints Day is a celebration of holy esprit de corps … esprit de Corps Mystique de Christ, the Mystical Body of Christ.

So while Jesus comes to me here and now on a quiet Friday morning in my little parish church in the middle of America, November reminds us we are part of something much bigger, much greater, here much longer than ourselves. It’s said that Americans lack a sense of history and there’s something to that. Live in Italy, where a walk down the street can take you past a Roman aqueduct, a medieval church, a Renaissance palazzo and a modern apartment house, your time frame expands. Live in China, and Italy might seem positively American in its time compression.

November reminds us that there have been many others at the same work of salvation that we are, praying many of the same prayers that we do, going to the same Mass that we do, receiving the same sacraments that we do. Sure, externals may have changed. But a woman back in 4th-century north Africa prayed the Our Father, a man in the 8th-century Low Countries prayed the Hail Mary, a child in Chartres made his first Holy Communion while the construction was ongoing, and a Renaissance robber felt the same joy in being forgiven of his sins that you do.

But we said that the Church is the community of those who love God. There are those who have achieved it, those who are fighting for it, and those who are “already … but not yet.” The outcome is decided: they’ve won. But they’re just not quite ready, there’s still some burnishing and polishing needed. Those are the souls in Purgatory. That is the “Church Suffering.”

Out of their bodies, disincarnate human souls can do nothing for themselves: what they are, they are. If there is to be any change, it must come from outside them — either from God and/or from us. God wills their salvation, but justly. Our ability to act in ways that are morally meritorious (because we can act in morally unmeritorious ways, too, i.e., sin) means we can also — in the state of grace — share that good with others. Hence, the Church on Earth and Purgatorial Church are connected.

That awareness also takes me outside myself, not just to those I know but to consider those I do not, those the world has long forgotten, those in need of prayer whom we would never know but for the fact that our prayers and good works “for the soul most in need of his mercy” joins me in an act of disinterested love with somebody wholly anonymous to me. In other words, it expands my love.

We live in a difficult moment for the Church. There is no denying that many people — particularly many ordained priests and bishops — have done things that have utterly defaced, disgraced and undermined the institution we call at Mass “his holy Church.” That needs to be fixed and atoned for.

But we would be wrong if we were to limit our view of the Church to the institution suffering challenges today, particularly in the Western world. We would be even more wrong if, as a result of those evils defacing the Church, we abandoned or walked away from her. November reminds us that the Church is something bigger and more important, with a purpose and a goal fare more vital in general and for me. I am no theological Pollyanna — the Church needs reform. But when we’re tempted just to focus on the “Church” in our day being in bad straits, let’s think for a moment about that Church — which at this moment, despite all its flaws, has many members signing a heavenly Te Deum laudamus and many others hoping that we might get beyond our momentary scandal to do something for them to join that chorus with full throats.
Share With:
Previous Article

Could Trump issue an executive ord...