The “Pencil Madonna” — A Modern Rendition of Our Lady of Sorrows 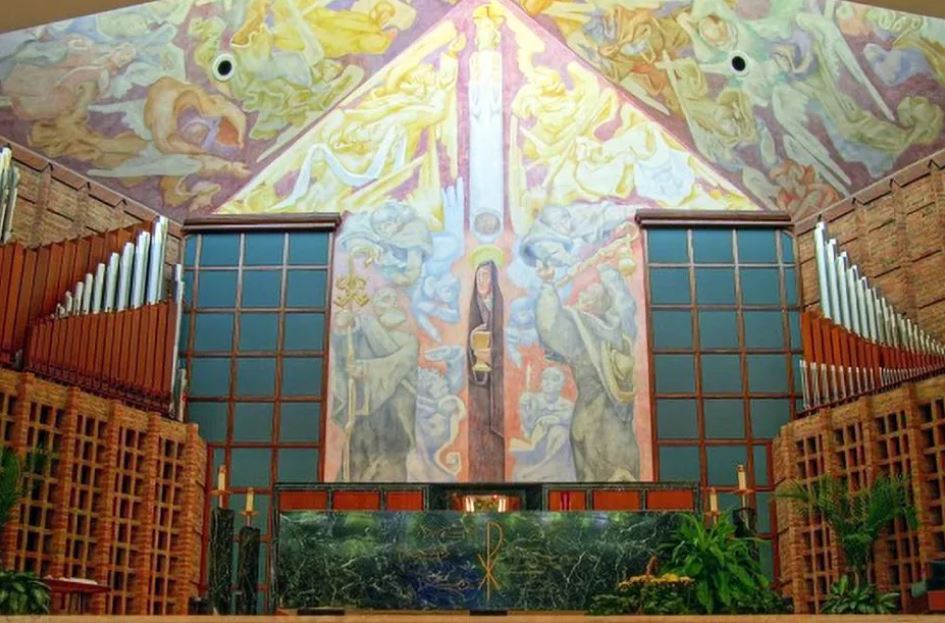 The “Pencil Madonna” — A Modern Rendition of Our Lady of Sorrows

“Our mother of sorrows, with strength from above you stood by the cross…”

On Sept. 15, the Church honors Mary under her title of “Our Lady of Sorrows,” recalling seven times when her love for her beloved Son meant that she experienced deep pain. At Our Lady of Sorrows Parish in Farmington, Michigan, those important events in Mary’s life are depicted in stained-glass windows and in a colorful fresco behind the altar.

The Church commonly lists seven times when Mary’s loving heart was pierced with sorrow. At Our Lady of Sorrows church, the striking fresco depicts yet another, eighth sorrow, when Mary must say goodbye to her Son as he ascends into heaven. Long and black, the prominent figure of Mary is nicknamed the “Pencil Madonna.” The mural also features a “Pencil Jesus” hovering just over his Mother’s head.

The contemporary fresco was painted in the summer of 1961 by French artist Jean Charlot. Born in Paris, France, then living and working in Mexico, Charlot applied to become a naturalized American in 1940 In the United States, he worked in Manhattan and in Colorado before accepting a professorship teaching art at the University of Hawaii at Manoa. His murals can be seen in San Francisco, Honolulu, Cleveland and other cities.

In designing the fresco, Charlot sought to produce a “liturgical catechesis” echoing the message conveyed in the church’s stained-glass windows, which were designed and constructed by Gabriel Loire of the famed Loire Studios in Chartres, France. The three-quarter-inch thick “slab glass” windows depict Mary’s seven sorrows:

The Prophecy of Simeon, “And thine own soul a sword shall pierce;”
The flight into Egypt, which meant hardship and inconvenience;
Christ is lost in Jerusalem at the age of 12;
Christ leaves his home to do his Father’s business;
The meeting of Christ and his Mother on the way to Calvary where she sees and feels his pain;
Mary stands at the foot of the cross and watches Jesus die; and
Christ is taken down from the Cross and Mary holds her dead son in her arms.

With the traditional seven sorrows already represented in the stained glass, Jean Charlot sought to show yet another of the great sorrows which Mary bore. He chose to depict an eighth “sorrow” — the Ascension of Jesus into heaven, when Mary was separated from her beloved Son.

Charlot himself explained the work:

I looked for a sorrow of hers not included in the traditional series, and linked directly to Christ’s mysteries. The Ascension of Our Lord, glorious in nature, nevertheless represents a parting of Mother and Son, and thus, from Mary’s point of view, a Sorrow. This double nature of the Mystery, glorious and sorrowful, allows a striking visualization based on contrast. The white of Christ ascending is framed in yellows, suggesting the full light of heaven. The black of Mary is framed between the gray silhouettes of the departing Apostles, in a subdued light that suggests dawn or dark.

Even in the glorious scene above, the title of the Parish, Our Lady of Sorrows, is further suggested by the two angels holding accessories of the Passion: on the left, some of the linen used in the entombment, and on the right, Veronica’s veil. These allude to the Passion, and also Mary’s compassion.

On earth, the theme of the Ascension of the Lord follows the Scriptural text. Angels appear to the Apostles, and bid them be on their way to evangelize the world. On the left, Peter, holding a traveler’s staff to which are attached the keys, receives instruction from an angel. On the right, James, chosen as patron of missionaries to far-flung lands, is dressed in the traditional cloak and wide-brimmed hat of the pilgrim. An angel gives him the pilgrim’s staff, from which hangs a water-gourd needed for the long journey.

Left of Our Lady, a prophet holds a scroll symbolizing the Old Testament. Above the prophet is an angel whose finger points to the scroll, illustrating it as an inspired text. Right of Our Lady, John, Apostle and Evangelist, holds a book representing himself and the other Gospel writers. The book, a more modern form than the scroll, refers to the New Testament in visual terms. Again, the angel above John represents inspiration from above.

The center of the arrowed panel, and thus the center of the whole fresco, including the ceiling panels, remains Our Lady. The chalice she holds represents her sorrow. This sorrow is not passive, however. Though seemingly static in the midst of the action, Mary represents the meditative facet of our faith without which action cannot bear fruit.

The Association of the Miraculous Medal offersthis prayerto Our Lady of Sorrows:

Our mother of sorrows, with strength from above you stood by the cross, sharing in the sufferings of Jesus, and with tender care you bore him in your arms, mourning and weeping.

Holy Mary, may we follow your example, and stand by all your children who need comfort and love.

Mother of God, stand by us in our trials and care for us in our many needs. Pray for us now and at the hour of our death.