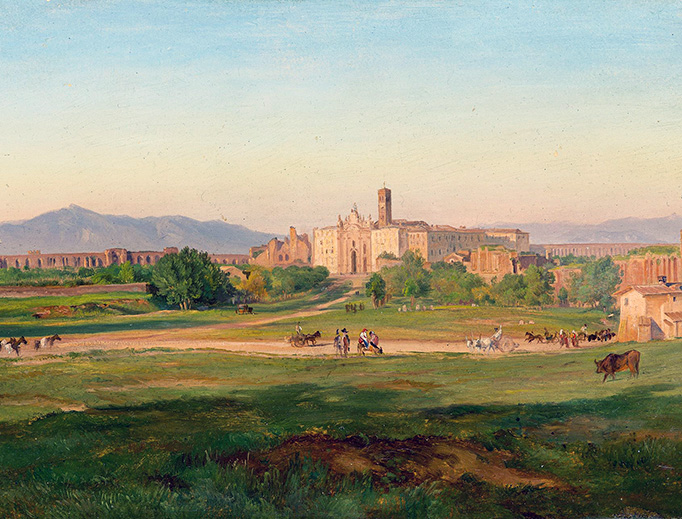 The whole business of relics delights me because it stands this rational world on its head.

Every pilgrimage to Rome should include a visit to the Basilica of Santa Croce in Gerusalemme (The Holy Cross in Jerusalem). If you’re hiking around the city it’s just up the hill from St. John Lateran, and after your visit it’s another half-hour hike up the hill to Santa Maria Maggiore.

In the side chapel of the basilica are the relics of the True Cross. In one reliquary you can see the finger bone of St. Thomas the Apostle. When the Resurrection stories recount St. Thomas putting his fingers into the nail prints, it’s moving to see that the finger in question has been preserved as an everlasting memorial to the victory of Resurrection over doubt.

The relic is kept along with a portion from the pillar where Christ was flogged and thorns from the crown of thorns. You can also venerate the cross beam of the good thief’s cross, three large sections of the cross of Christ and the titulus crucis — the title board that hung over Jesus’ head.

“Come now, Father,” I hear you protest, “shall we believe in all these relics? What good are they? Don’t they lend to superstition? Haven’t we moved on from all that? Don’t you know that if they collected all the so-called relics of the True Cross they would have enough wood to build Noah’s Ark?”

First let me recount the tale of these particular relics:

In the early fourth century the emperor Constantine’s mother Helena went to Jerusalem to look for the cross of Christ. As the story goes, the Christians showed her the relics, and when she asked to have them, they made her promise not to remove them from the Holy Land. She agreed, and then proceeded to load a ship with soil from Jerusalem onto which she loaded the relics, thus keeping her promise not to remove them from the Holy Land. Upon arriving at Rome she put the soil down in the grounds of her imperial palace and built a chapel to house the relics. Built over the site of that palace is the present day Church of Sante Croce in Gerusalemme. Archeologists have not only discovered the remains of an imperial palace there, but they have also discovered that the soil under the church is from Jerusalem.

So far, so good. Recently a Protestant scholar called Thiede did some work on the titulus crucis. The details of his research can be read here. It makes a fascinating account, and even more credible as the work was done by a Protestant with no particular Catholic ax to grind.

If the relics are authentic, so what? Well, during this Eastertide we do well to remember that our faith is physical. We believe in the incarnation — God’s Son really did take flesh of a woman at a particular place in time. The faith continues to impact the physical realm. It’s all about flesh and blood and fingers and toes and hammers and nails and hands and feet and bread and wine and water and smoke and physical stuff. The relics remind us of this in all their gory simplicity. Yes, here is an arm bone of a saint. There is an incorrupt body for which we have no explanation. Here is a thorn that may have pierced the Savior’s brow. There is a cloth that they wrapped him in. Maybe that mysterious imprint is the mark of his Resurrection — still there, as 2,000-year-old photographic evidence.

Shall we believe it all? The Church teaches that we should use common sense and be suitably skeptical, but we should not be so skeptical that we become cynical.

For my money, I’d rather err on the side of gullibility. On the last day I’d rather be blamed for believing too much than too little. Was I too credulous? I trust that will be forgiven. Was I too childlike in my wonder and awe? I thought that was one of the Kingdom’s entry requirements.

The whole business of relics delights me because it stands this rational world on its head. “Come now, Father, we know that it is the spiritual that counts most. Bones of saints and nails from the True Cross don’t really matter.”

Really? I thought saying the spiritual realm is more important than the physical is a little heresy called Manichaeism. Surely because of the Incarnation and Resurrection we say that matter does matter, and if it matters, then relics — gory and gruesome and literal as they may be — remind us of this fact.

My oh my, it turns out that it all matters very much, and for this reason, when we wonder at the Resurrection let us remember the finger bone of St. Thomas and fall down with the apostle and say, “My Lord and my God.”