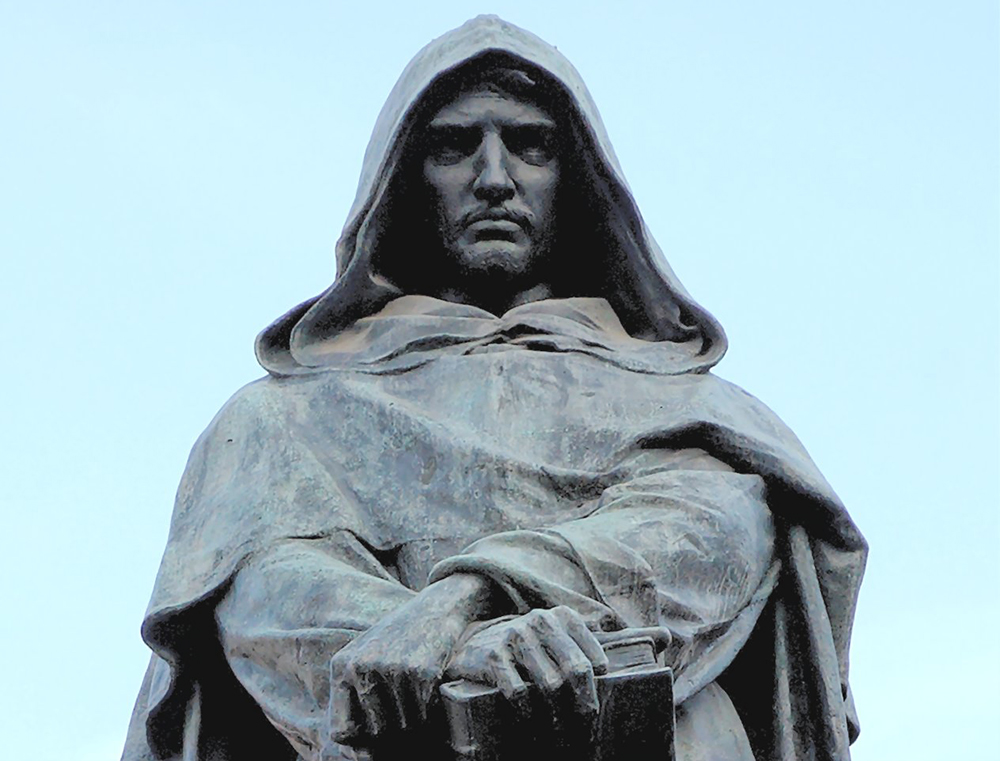 Bruno was burned at the stake in 1600 in the Campo de’ Fiori in Rome — but not for the reasons most people think.

Some people would have us believe that Giordano Bruno (1548-1600) was executed because of his scientific beliefs. Nothing could be further from the truth. His theological opinions certainly didn’t help his case at his trial but eventheydidn’t condemn the man. In fact, his canonical trial lasted for seven years —if not a record, it’s at least notable —so his was hardly a kangaroo court or star chamber decision. Rather, it was a thorough and methodical court case that was extremely lenient of a fractious and incalcitrant individual.

For the seven years Bruno was on the run, the Catholic Church and the Dominicans urged him to reconcile himself and yet he refused even though he had previously begged to do exactly that multiple times prior to his arrest. Bruno wasn’t tortured as part of his trial and, in fact, was treated fairly and maintained as good a standard of health as could be expected for the 17th century — otherwise he would have never withstood seven years of imprisonment. If his prison conditions were as bad as people think they were, Bruno would have lied and acceded to the court’s demands simply to escape his situation.

At best, people greatly exaggerate Bruno’s martyrdom to science. At worst, it’s completely false and an absolute lie. In reality, Bruno didn’t promote Copernicus’ scientific work. Instead, he denigrated his heliocentric model, which had already gained popularity amongst contemporary Jesuit astronomers, but not by Protestant thinkers. Bruno advocated for a Neo-Platonist Hermeticism, more akin to a gnostic mystery cult than to actual science. In hisNatural Philosophy, the sun became the “Monad of Monads” around which the universe revolved. Oddly, Bruno also insisted that all sunsalsopossessed planets that were populated by sentient creatures.But if this were true, he would have to admit that each star was its own Monad of Monads around which the entire universealsorevolved, which isn’t logically consistent, let alone physically possible. Bruno isn’t a scientist but more like ore accurately portrayed as Shakespeare’s gnostic magician Prospero fromThe Tempestthan it did the more empirically-based science of the much earlier St. Albert the Great (1193-1280) —anactualscientist.

As to Bruno being judged on his theological views, he was not only excommunicated by the Catholic Church but by the Swiss Calvinists, the German Lutherans and the English Anglicans as well. He, apparently, was generally unliked wherever he went. In modern parlance, Bruno was a “mean cuss.”

Keen insight into Bruno’s personality can be gotten from his 1584 publication entitledCena delle ceneri(i.e., “Ash Wednesday Supper.”) When he visited Oxford University with the hope of being allowed to lecture there, he was refused. This infuriated him so much, that it prompted him to publish the above manuscript in which he attacked the Oxford professors, saying that they knew more about beer than about Greek. In reality, though Bruno had some interesting insights into Aristotle, he barely had any grasp of the pre-Socratic philosophers but his ego was bruised and thus lashed out.

Bruno later moved to Paris and made several attempts at reconciling with the Catholic Church, all of which failed because of his refusal to accept a specific, imposed condition — namely, that he should return to his order. If he truly hated the Church, why did he hope to be reconciled with it time and time again? If the Church wanted him dead, why did it welcome him back into the fold and ask him to remain a priest?

To be clear, neither the Catholic Church nor the Dominicans ever charged him with heresy. Rather, it was a peevish, superstitious secularist, Venetian patrician Giovanni Mocenigo, who hoped to learn Bruno’s “magical secrets” and who lied to the Inquisitor’s Office, accusing him of heinous things. In 1591, Bruno went to Venice at Mocenigo’s invitation in the hope that Bruno would teach him his famed mnemonic system, which he had plagiarized from Ven. Raymond Llull. When Mocenigo realized that Bruno’s incredible memory was a matter of diligent study rather than “magic,” and thinking his money would have been better spent elsewhere, he falsely denounced Mocenigo to the Venetian Inquisition.

Throughout his trials, Bruno took refuge in the principle of the “two-fold truth” or what moderns would call “talking from both sides of your mouth.” He claimed that the errors imputed to him were held by him “as a philosopher and not as an honest Christian.” This was a lie as he had already been excommunicated by every Protestant denomination, including all of the heretics thought were heretical, by the time of his arrest. Second, he made his living by specifically decrying and attacking Christians, Christianity and the Catholic Church.

Regardless of all of his previous behaviors, Bruno recanted all of his errors and doubts in the matter of Catholic doctrine and practice. This, however, attracted the attention of the Roman Inquisition which intervened and requested his extradition from Venice. In February 1593, Bruno was sent to Rome and was imprisoned for six years while his trial progressed. No one is sure why his trial lasted so inordinately long as this was highly unusual. It’s possible that the Tribunal wanted to test Bruno as to his conveniently newfound respect for the Catholic Church after having denounced it for most of the previous two decades.

In the spring of 1599, Bruno’s trial begun and was given ample time to recant his previously held beliefs. Unfortunately, he didn’t even keep up the pretense of his previous lies. He was finally condemned in January 1600 and handed over to the secular authorities on Feb. 8. On Feb. 17, Bruno was burned at the stake in the Campo de’ Fiori in Rome.

The Stanford Encyclopedia of Philosophyclearly points out that Brunowasn’ttried for his theological heresies. In fact, “in 1600 there was no official Catholic position on the Copernican system and it was certainly not a heresy. When […] Bruno […] was burned at the stake as a heretic, it had nothing to do with his writings in support of Copernican cosmology.”The Catholic Encyclopediaconcurs. Bruno wasn’t condemned for his defense of his wild and untested and untestable astronomical opinions, nor for his doctrine of the many inhabited planets, but for his theological errors, among which were his belief that Christ wasn’t God but merely a preternaturally skillful magician, that the Holy Ghost is the soul of the world and that Satan would be saved.

Rather than being a materialist in the modern atheistic sense, Bruno would be best described as a mystical rationalist/Neo-Platonist defender of materialistic monism. In other words, he agreed more with Spinoza than Einstein.

Thus, instead of the old narrative of the Catholic Church killing Bruno for being a creative, original and independent scientist who employs his rare and precious mental faculties to tear the mask off nature and stare at the Face of God, Bruno was just a regular, run-of-the-mill misanthrope who knew nothing about science. He was a socially-maladroit metaphysician who mistook his feelings with science. In reality, the Catholic Church didn’t kill him. Bruno chose suicide-by-the-state rather than being humble enough to keep his vows as a Dominican priest.