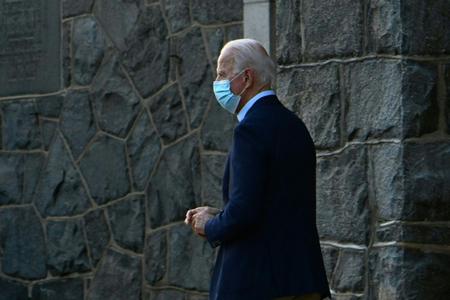 A NOTE FROM OUR PUBLISHER: The U.S. bishops have challenged some of Joe Biden’s public positions as problematic because they cause confusion about Church teaching. But for many Catholics, the bishops’ stance on whether politicians should be allowed to receive the Eucharist when their public positions are at odds with Church teaching is equally confusing.

As a candidate for president, Joe Biden used every available opportunity to make his Catholic faith an issue in the campaign. Clearly, this was a very effective political strategy for Biden.

Election Day exit polls show he received roughly half of the votes of self-identified Catholics, despite his clear record of supporting policies that are antithetical to the faith. So it should come as no surprise that a Joe Biden presidency has already been characterized by the head of the U.S. bishops’ conference as posing a “difficult and complex” situation.

Archbishop José Gomez of Los Angeles, the president of the U.S. Conference of Catholic Bishops, speaking at the USCCB’s Nov. 16-17 virtual fall assembly, publicly drew attention to the challenges that a Biden presidency will pose, due to the presumptive president-elect’s dissent from key elements of Church teaching.

Given his clear public-policy positions during the campaign, we should take Biden at his word. Archbishop Gomez summed this up saying that Biden “will support policies that are against some fundamental values that we hold dear as Catholics. These policies include: the repeal of the Hyde Amendment and the preservation of Roe v. Wade. Both of these policies undermine our preeminent priority of the elimination of abortion.”

Indeed, Biden’s campaign promises regarding abortion wouldn’t merely undermine the Church’s pro-life commitments. Their implementation would seek to permanently institutionalize abortion rights into U.S. law, with little or no restriction.

Along with Biden’s pro-abortion policies, Archbishop Gomez cited Biden’s deeply problematic stances regarding “the restoration of the HHS mandate, the passage of the Equality Act, and the unequal treatment of Catholic schools.”

Restoring the Health and Human Services’ mandate would violate the conscience rights of groups like the Little Sisters of the Poor, by forcing them either to shut down the life-sustaining services they provide to the elderly or to make abortifacients and contraception available through their employee health plans. The Equality Act, meanwhile, would expand anti-discrimination protections to include sexual orientation and gender identity, thereby potentially compelling Catholic schools and other Catholic institutions to adopt policies in grave conflict with what the Church teaches about human sexuality.

The archbishop correctly pointed out that any politician who pushes for these policies should be challenged for the ways they threaten the common good, but for a Catholic who supports them, it’s even more problematic, namely because it creates confusion “about what the Church actually teaches on these questions.”

While this analysis of the challenges presented by a Biden presidency is absolutely accurate, it is unfortunate that such a public assessment from the bishops comes now, when the election is over, rather than in a more forceful way before Americans cast their votes.

As president, Joe Biden would become only the second Catholic in our nation’s history to hold the highest office — and the first to have made his Catholic faith such a centerpiece of his run for the Oval Office.

In 1960, John F. Kennedy, the only previous Catholic president, specifically distanced himself from his Catholicism by famously declaring, in a campaign speech to an audience of Protestant clergy, that he would never grant precedence to what the Catholic Church teaches ahead of other considerations.

Biden, by contrast, went out of his way during the 2020 campaign to insist that his faith informs all of his political and personal decisions. So his position on abortion, in particular, possesses an unprecedented capacity to sow confusion and create scandal among the faithful by propagating — directly from the nation’s highest political pulpit — the false belief that support for abortion is an acceptable position for a Catholic.

The U.S. bishops are well aware that they are likely to have very little time before Biden forces them to react. Many expect Biden will move immediately to issue an executive order to repeal the Mexico City Policy that prevents federal funds from being directed to groups that provide or promote abortion overseas.

There are numerous other areas where he is likely to employ his executive powers swiftly to advance the Democratic Party’s positions in support of abortion rights and in support of the agendas advocated by “LGBT” activists. These actions would trample the common good of the nation and ignore the freedom of conscience of Catholics and other U.S. citizens who oppose such immoral actions on the basis of their religious beliefs.

While the Church must confront these serious issues in the public square, another serious issue has to be confronted within the Church, as well. Back in 2004, when there was a prospect of another Catholic presidency if Democratic nominee John Kerry had won that year’s presidential election, a national controversy erupted over the question of whether it was correct to deny Communion to pro-abortion Catholic political leaders.

The U.S. bishops appealed to Rome for guidance and were advised by then-Cardinal Joseph Ratzinger, the prefect of the Congregation for the Doctrine of the Faith, that denying Communion was indeed warranted under some circumstances.

That finding provoked sharp divisions among the U.S. bishops, highlighted by the fact that the then-archbishop of Washington, the disgraced Theodore McCarrick, tried to suppress the dissemination of Cardinal Ratzinger’s reply.

At the time, the bishops couldn’t agree and decided to leave the matter up to the discretion of each local ordinary, rather than trying to craft a common policy that would apply throughout all U.S. dioceses. But with an openly pro-abortion Catholic president in office for the first time, as would be the case with a Biden presidency, this issue has come back to the fore. While in Rome for the ceremony at which Pope Francis will make him a cardinal, Washington Archbishop Wilton Gregory gave an interview in which he made it clear that he has no intention of denying Communion to Biden.

As lay Catholics, we need to take the lead role ourselves, by working actively in the public square to advance what the Church truly teaches. We need to make our voices heard in opposition to any public-policy proposals or actions that are inconsistent with Church teaching, particularly on the preeminent issue of life. We also need to make our bishops aware of our concerns and call upon them for greater clarity where there is confusion. We must also pray. We need to pray for Joe Biden and all our political leaders — for conversion of heart, especially on issues of life, marriage and family. We need to pray for our bishops — for strength and courage in these times of confusion. And finally, we must also pray for our nation — that we overcome our divisions and work together for the common good.