The Unconventional Mission of ‘Sister Dede’ 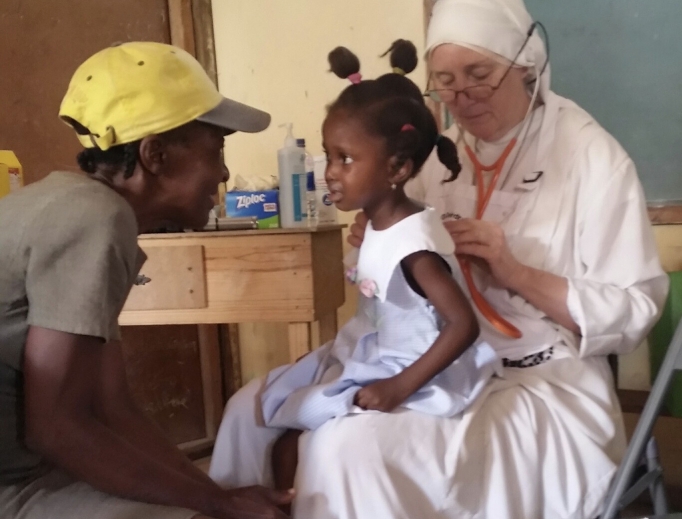 The Unconventional Mission of ‘Sister Dede’

In an exclusive interview, Sister Deidre Byrne discusses her recent speech at the Republican National Convention, her passion for medicine, missionary work, and how to win this current spiritual battle.

Little Workers of the Sacred HeartsSister Deirdre “Dede” Byrnemade national headlines when she delivered a speech at the Republican National Convention that portrayed unborn children as “the largest marginalized group in the world.”

Her speech came a week after the Democratic National Convention, which included prayers delivered by Sister Simone Campbell, a Sister of Social Service and a political activist, and Jesuit Father James Martin.

A retired colonel in the U.S. Army Medical Corps and a missionary surgeon, “Sister Dede” has traveled the globe, treating military personnel and the needy in Afghanistan, Iraq, Haiti, Kenya and Sudan. At present, she serves as a volunteer surgeon at the Spanish Catholic Center in Washington, D.C., and helps with her order’s physical therapy clinic, while caring for several elderly members.

During an Aug. 31 interview with Register senior editor Joan Frawley Desmond, she explained why she decided to speak at the RNC, where she emphatically declared she was “pro-life” and “pro-eternal life” and discussed her part-time ministry helping women reverse chemical abortions. These strong feelings led her to call the Biden-Harris campaign the most “anti-life presidential ticket ever.”

Why did you decide to speak at the Republican National Convention (RNC)?

During the Democratic National Convention the previous week, there was a lot of talk on the news about the Democratic vote, the Catholic vote and how Joe Biden was a good Catholic, despite his support for legal abortion. Also, the convention featured a priest and religious sister speaking, and I feared many Catholics would be confused by this support.

As a Catholic doctor, sister and human being, I believe that legal abortion is the most critical issue for us, and so I was distraught by what I heard.

I also reflected on how other issues go hand in hand with our responsibility to defend unborn life, such as respect for religious freedom and freedom of speech. I thought about what happened to the Little Sisters of the Poor [who filed a legal challenge to the Health and Human Services’ contraceptive mandate] and Nick Sandmann [the Covington Catholic High School student who successfully suedmedia outlets for defamation of character after their coverage of a video of his encounter with a Native American activist at the 2019 March for Life that damaged his reputation].

I took all of this to prayer, and asked the Lord, “Help me, Lord, to be your voice in any way you would like.” Then I got a call that same day from the White House asking that I speak.

As a sister, I knew we could not endorse a certain politician. But I did some research and discovered that Sister Simone Campbell said she had spokenat the DNC three times and that she supported abortion in some cases. I spoke with our provincial, and she approved my appearance because my talk would defend the unborn.

What has been the reaction to your appearance at the RNC?

I’ve received calls thanking me for what I said. I’ve also been maligned for thanking the president for the pro-life work he has done. This has led to accusations that I was supporting him, and I was not expecting this response at all. All I spoke about were clear facts, no endorsement. I look at myself as a little person and a doctor who was giving a talk on life, which I have done many times at smaller venues. Even so, I would have felt worse if I had not followed what my Lord was calling me to do.

During your speech, you stated, “As a physician I can say without hesitation that life begins at conception.” Do you see hopeful signs that more Americans embrace this truth?

Absolutely. We use ultrasounds now and clearly see the baby and their heart beating as early as 6 weeks, which is when many women discover they are pregnant. That’s what converted Dr. Bernard Nathanson,the abortion doctor who became a pro-life activist.

I mostly work as a surgeon, but my heart is with the unborn, and I help with a program that serves women who want to reverse their abortion. The program is called Abortion Pill Reversal.

When a young girl clicks onto the website to see how she can reverse her abortion, nurses are on call throughout the United States, 24 hours a day. They find the caller’s location and use a national list of doctors to find someone who can help her.

When I am contacted, I offer help to the young woman and answer her questions. Then I call in the medicine — a high dose of progesterone, which is used to flood the body and compete against the mifepristone, also known as RU-486, that would choke the life of the child. I meet with the woman a day or two later to see how she is doing medically and spiritually and perform an ultrasound to assure that all is well with the child. Over half of these women’s children survive and are healthy and vibrant.

During your speech, you also said, “I am not only pro-life but pro-eternal life, and I want all of us to end up in heaven.”

We prepare for eternal life by following the Lord’s teachings. First, we are called to take care of the most vulnerable, and you can’t get more vulnerable than the unborn.

And we are here to take care of the poor and hungry. As Mother Teresa reminded us, “Whatsoever you do to the least of my brothers you do to me” [Matthew 25:40].

This is the crux of our faith; however, many Catholics are poorly catechized. For example, many of my patients are cohabitating and contracepting. If they are Catholic, I give them “the straight talk,” but with humor. I do this because no one else has [done] or will do it. And if I don’t, I will have to answer to the Lord, who will ask me, “Why didn’t you do more?”

We also must be in the state of grace to enter heaven, and the sacrament of reconciliation gives us a chance to reflect on our sinfulness. God wants us to be holy.

You come from a large Catholic family, with one brother who is a priest and several siblings who are physicians. What was your family life like?

We grew up in McLean, Virginia. Dad was a thoracic surgeon; mom stayed home and raised us three girls and five boys. They sacrificed everything for our faith and education. Dad and Mom both went to daily Mass and prayed the Rosary regularly.

Did your father’s example inspire you to become a surgeon?

I was attracted to medicine because he loved it so much. Once, when I heard the phone ring in the middle of the night and knew he would have to go to the hospital, I snuck into the car, and on the way there, I yelled, “Surprise!”

I told him, “I want to see what you are doing.” He laughed, and on to the hospital we went. He had surgery that night, and I waited outside.

After college, I decided to become a family physician because I wanted to be a missionary doctor. I joined the U.S. Army for the scholarship offered. That helped my parents, who were already putting four of my siblings through college, as well.

I continued to pray about my vocation through those years, but due to my military commitment I couldn’t jump in right away. Later, I returned for further training in a surgical residency and spent some time working with my father at Georgetown.

Didn’t your path to the Little Workers have many twists and turns?

I felt the call to be a medical missionary even as a youth, so I thought it was logical to join a medical religious community. But those that I contacted didn’t practice traditional religious life. For me, spending time daily in adoration and daily Mass was critical.

When I was a fourth-year surgery resident at Georgetown, Cardinal [James] Hickey had open heart surgery, and I happened to be on call. I helped harvest His Eminence’s veins and crack his chest, and then I managed his postoperative care. He was my undivided patient. After he was discharged from the hospital, I asked if I could meet with him, and we spoke at his home for three hours.

He was like a dad. I told him about the liberal religious communities I had met, and he said, “A feminist virus has infected them.” He told me to spend half a day in prayer and the other half serving the poor.

I met the Little Workers a few years later and entered the order and made vows in 2004.

We really do anything that is needed at the time. This was our founder, Blessed Msgr. [Francesco] Greco’s wish. Thus, our community has many schools, but also we run nursing homes worldwide, provide hospice care, and also physical therapy in Argentina, Albania, India, Italy and the U.S. We are a community that puts everyone between the hearts of Jesus and Mary, and we try to serve Our Lord in any ministry God is calling us to do. But the crux is catechesis through our ministry. Our convent in Washington, D.C., is predominantly a medical mission home, per our mother general’s wishes.

Our sisters here came from Italy in 1954, just after the Second World War. Our Italian sisters think highly of the U.S. and its military because of our support for them during that horrible time of German occupation in their villages in southern Italy. They allowed me to continue military service as long as it didn’t disrupt my formation, since the world had changed so much after 9/11.

So I would change into my surgeon’s scrubs at Walter Reed Medical Center and then change back into my habit and return to my community. The only difference was that I was caring for the military and not the poor. When I was deployed to Afghanistan, I wasn’t able to wear my habit. In 2009, I retired from the military after 29 years.

You have kept up your missionary work?

Yes, thank God. As a volunteer surgeon, I see patients who don’t have any medical insurance two days a week at the Spanish Catholic Center, and I operate one day a week at Sibley Hospital here in D.C. On Saturdays, I manage our order’s pro bono physical therapy clinic, which is served by our great volunteer staff of local physical therapists.

I have also served as a medical missionary in Kenya, Haiti, Sudan and Iraq. I am a part of the Archangel Airborne, comprised of a group of doctors, nurses and pilots who take part in relief missions in underserved areas, predominately Haiti.

These days, you are keeping an especially watchful eye over elderly sisters in your care. The pandemic is posing challenges for all of us, but are we also learning to draw closer to God?

My heart aches for those who don’t have faith in a loving God. But for those of us who do, COVID time has made us more fervent in our faith.

Our community has been enriched spiritually during this period, spending more time in prayer and before the Eucharist, and we have still been able to care for the poor who have experienced great physical and financial suffering.

There is a spiritual battle going on. The devil is real, and that is why I felt called to put my rosary up there during my speech at the Republican National Convention, encouraging all to pray — pray hard. That is how we will fight and win this battle.