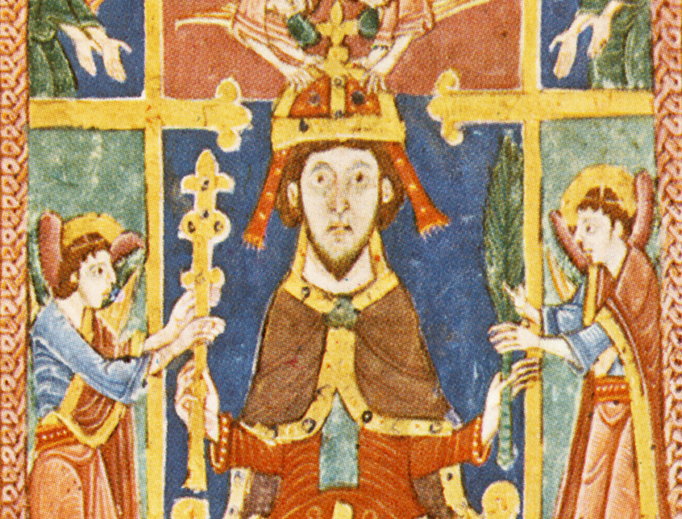 “While Edmund still called out to Christ, the heathen dragged the holy man to his death, and with one stroke struck off his head.”

In 1539, on the orders of Henry VIII, the Benedictine Abbey of Bury St. Edmunds was destroyed. It had been founded five centuries earlier in 1020 by another king, Canute. Its purpose was to enshrine the relics of a ninth-century king, Edmund, who had died for his faith. Now, 1,000 years after the monastery was built, an archeological dig is proposed with the hope of finding once more the remains of England’s Anglo-Saxon martyr-king.

Edmund was born about 840; he was to die just 30 years later in 870. Aged 15 years old, he had been crowned King of East Anglia. Despite his youth, he was a model ruler from the start, dealing fairly with all. But he was more than just; he was also devout. For a whole year, King Edmund retired to his royal tower at Hunstanton to learn the Psalter so that he might afterward recite it ceaselessly by heart.

In 870, he was forced to defend his kingdom from the invading Danes. He repulsed them but they returned in greater numbers than before and overwhelmed Edmund’s forces. When the pagan Danes captured Edmund they offered that he might remain king as a vassal of the Danes, on condition that he renounce his faith. Bound in chains, facing his captors, he declared to all present that his Christian faith was dearer to him than life itself.

Subsequently, the Danes beat him with cudgels. Then they tied Edmund to a tree so that they might more easily tear his flesh with whips. Even then, they could not make him cry out for mercy or yield his religion. Instead, to their exasperation, he repeated over and over the Holy Name of Jesus. Infuriated, Edmund’s captors took to firing arrows at him as he stood bound to the tree, “as if it was a game, until Edmund was entirely covered with their missiles, like the bristles of a hedgehog.” Eventually, angered — and no doubt bored — by how ineffectual the tortures were proving, the Danish overlord Hinguar ordered Edmund to be beheaded.

“While Edmund still called out to Christ, the heathen dragged the holy man to his death, and with one stroke struck off his head.” Thereafter, the king’s body was buried where it lay; but his severed head was taken by his murderers and left in a nearby wood. Tradition states that, days later, Edmund’s followers while looking for the king’s head were directed to what they sought by a large wolf who appeared to be standing guard over the holy relic.

That story is still preserved in Bury St. Edmunds. If you visit the town today, you would find there a statue of a wolf with a crown beside it.

Eventually, from their first burial-place, the martyr-king’s relics were removed in the 10th century to nearby Beodricsworth. There they would be housed in an abbey built by King Canute, and that would thereafter be called the Abbey of St. Edmundsbury.

In time, Edmund’s tomb at the Abbey of Edmundsbury became a popular place of pilgrimage. Thus, the abbey became one of the wealthiest monasteries in all Christendom, and the town, now known as Bury St. Edmunds, prospered.

The Requiem Mass of Mary, Queen of France, sister of Henry VIII was offered at the abbey in 1533. However, only six years later, Henry VIII destroyed the monastery, both its buildings and abbey church. It is said that the bones of St. Edmund were removed from the abbey by devotees of the saint and local tradition recounts that they were re-buried secretly nearby.

In the centuries that followed the stones of the ruined abbey found new purpose in the construction of the town’s houses and buildings. But, as life went on, one question went unanswered in Bury St. Edmunds, namely: where lay buried the body of the slain king, St. Edmund?

M. R. James is one of England’s finest ghost story writers. He was also a respected antiquarian and medieval scholar. It was through his researches that he became convinced that he had identified the final resting place of the medieval monastery’s abbots. In 1903, James was proved right when an archaeological dig uncovered the graves and bodies of the monastery’s five abbots. But, frustratingly, no royal remains were unearthed.

Rumors persisted, however. Many were convinced that, in spite of Henry VIII’s wreckers, the saint’s body must have been interred somewhere in the abbey grounds. In 2020, 1,000 years after the construction of the abbey and nearly five hundred years after its dissolution, permission has at last been given to test that hypothesis with preliminary excavations to be undertaken in the former abbey’s grounds beneath what today are dilapidated tennis courts.

It seems likely that, at the very least, there will be found the bones of generations of monks buried there, but could it be that beneath those now shabby tennis courts lies, too, the body of a king and martyr-saint? That such an inauspicious modern site should be the final resting place of an English king has recent precedent. In 2012, the bones of King Richard III were discovered beneath a car park in Leicester. Is it too much to hope that those of Saint Edmund will be found beneath a disused tennis court in an East Anglican market town?

Over the years, there have been many excavations in the grounds of the former abbey at Bury St. Edmunds. Although to date these have not unearthed the relics of the martyr-king, archaeologists did come across a curious find.

In 1848, workers on an archaeological dig at the former abbey’s hallowed ground found buried there the skull of a wolf.