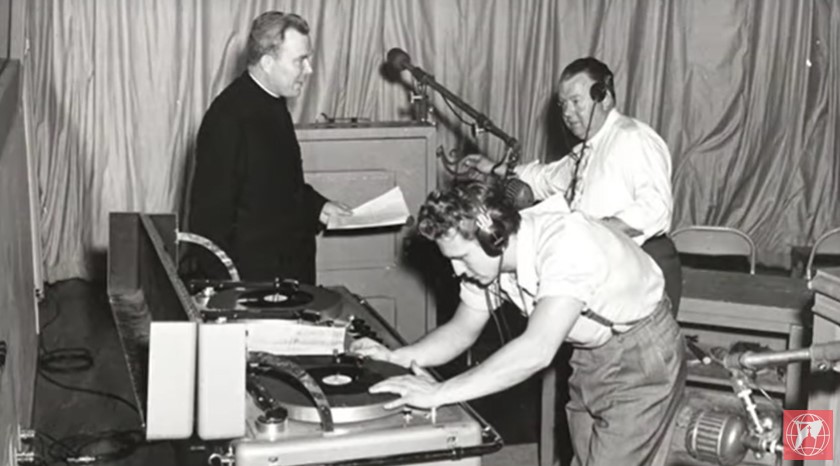 Father Patrick Peyton, known for his slogan, “The family that prays together, stays together,” traveled the world to spread devotion to the Virgin Mary through the Rosary.

Staring his own mortality in the face and struggling beneath the weight of a terminal diagnosis of tuberculosis on the upper lobe of his right lung, Patrick Peyton sat up on his deathbed feeling his faith ablaze like a pile of hay sprinkled with gasoline and ignited with a match. The words he had just received from one of his professors, Father Haggerty while visiting his hospital room, were the most powerful he had ever heard in his life and changed everything:

Patrick, who at the time was receiving his formation at Notre Dame to become a Holy Cross priest, mentally and physically had been at his worst with his condition. He was depressed and had even thought that he had lost his faith. But with those words, he invited his family and friends and fellow seminarians, anybody he could think of, to pray for healing through the intercession of Mary. If he were to be healed, he made a promise to God that he would dedicate his life and his ministry as a priest to devotion to Mary through the family Rosary. Day by day he began to get a little stronger. Eventually the doctors examined the X-rays and told him that he was going to live, but could not explain how it had happened.

With a new lease on life, Patrick finished up his studies and did become a priest with a mission to spread the Rosary, a devotion that was instilled in him as a young child. He was born in 1909, the sixth of nine children, to a very poor farming family in County Mayo, Ireland. His mother and father, when they got married, decided that they were going to be a Rosary family, so they would pray it each night after dinner. Father Peyton would later reflect that his family was the great blessing of his life because it became all he needed — a home, a library, a university — where he learned all of the essential elements of the faith. He started to see what the prayers meant and how the mysteries applied to his life. Devotion to the Rosary was so natural to him that on one occasion when young Patrick was visiting a neighboring farm, he was surprised when that family did not pray the Rosary after dinner like his family had done on every day of his life. So he decided then with bold faith to explain the value and meaning of the Rosary to the farmer and encouraged him to lead his family in prayer.

As a young man, his dream was to study for the priesthood and become a missionary so Patrick began to write letters to missionary societies. Unfortunately he was rejected and his plans were ruined by 1927, at which point he decided to come to the United States to sell real estate. He thought to join his three sisters and relatives who had settled in Scranton, Pennsylvania. After he and his brother Tom arrived in America, Patrick searched for weeks without success for employment. Eventually a local priest offered him a job as a sexton, a janitor in the cathedral, which he accepted. It was during that time working in silence and prayer that Patrick’s dream of becoming a missionary priest reemerged. A band of the Holy Cross fathers passed through his area and gave a mission that he attended. With his desire for the priesthood reignited, both he and his brother inquired and quickly were off to the University of Notre Dame for their formation to become Holy Cross priests. There he felt that he had found a second family that also prayed the Rosary as part of their daily routine. He knew that this is where God wanted him to be.

Following the miraculous cure from tuberculosis, Father Peyton felt reinvigorated to continue on his journey to become a priest and to dedicate his life to the Blessed Virgin Mary through the Rosary. He was ordained two years later on June 15, 1941 (the same day as his brother) and was given a post as the chaplain to the Holy Cross brothers in Albany, New York, at the Vincentian Institute.

In his first years there, Father Peyton desperately wanted to find a way to thank the Virgin Mary for his miracle and on retreat one day was inspired to conceive of Family Rosary Crusade to try to reach people to encourage them to pray the Rosary.

The vide-postulator of his canonization cause, Father David S. Marcham, recounts that his first introduction into learning about who Father Peyton “was just like many people who heard his name and the expression that ‘the family that prays together stays together.’” Father Peyton began to write thousands of letters, including to bishops and cardinals. The first rally in 1948 in London, Ontario, grew from a proposed parish mission to a successful rally with over 80,000 families, including 95% of the diocese, in attendance. After holding rallies in the United States, Father Peyton set out on a quest to bring the events to 10 million families worldwide: in Latin America (Colombia and Brazil) 4.5 million people attended; in Europe (England, Ireland and Spain) almost 3.7 million; in Africa (Tanzania, Uganda, Kenya and South Africa) almost half a million and in Asia (the Philippines, Thailand and Singapore), 2.2 million people were in attendance. All told, Father Patrick Peyton was seen live by more than 28 million people — more than anyone else in the history of the world before the pontificate of Pope St. John Paul II. Father Peyton biographer Father Richard Gribble saw that Father Peyton believed with his whole heart that “this particular prayer would indeed be the vehicle we could bring greater wholeness to the Church, greater wholeness to peoples throughout the world.”

Father Patrick Peyton soon realized that to reach as many people as possible he would need to make use of the media to spread the message. At first he got a small show on a local radio station in Albany, New York, and it was wildly successful. That gave him the bug and Father Peyton knew if he wanted to reach millions with family Rosary prayer he had to go off to New York City. There he persuaded a non-Christian woman from the Mutual Broadcasting System to give him airtime if he could come up with a big Hollywood star to be on his radio show. He asked “who’s the most popular actor in Hollywood today?” Learning that it was Bing Crosby, Father Peyton cold called the actor at his house in Beverly Hills. Bing Crosby became the first guest and the show was off and running, quickly becoming a major success. Cardinal Spellman came on and introduced the program and the even the new president of the United States, Harry S. Truman, endorsed this program.

He knew he needed to go to where the stars were and where the production was happening, so next he headed off to Hollywood. Father Peyton identified one of the local parishes where many celebrities worshiped there and one-by-one he just asked, “would you be on my radio show?” By February 1947, he had a national radio show.

He was very intuitive in seeing that the media platform — first radio and then television and films —could bring in spreading the Gospel. With the television becoming a fixture in American households in the 1950s, Payton ventured into content for the screen as early as 1951 with “Hill Number One,” which gave James Dean his first onscreen credits as an actor. He discovered the power of film to bring his Marian devotion to life visually and raised the funds, assembled a team of producers and writers and shot in Spain on location the 15 mysteries of the Rosary. This project became a vehicle for evangelization in Latin America to be able to provide a pictorial of the scenes from the life of Christ. He sent huge crates with projectors, film reels and generators all around the world and, for some people, those films were the very first that they ever saw.

The impact that the “Rosary Priest” had was immense. Holy Cross Father Willy Raymond, president of HolyCross FamilyMinistries which continues Father Peyton’s work today, sees the importance of Father Peyton continuing in today’s world “because of the state of the family, not just in the United States but around the world, we are in need of a saint for family prayer — I don’t think I know of any better candidate for that.” Father Peyton’s worldwide Rosary Rallies and his far-reaching media work all stemmed from a childhood devotion and making good on a promise made to the Virgin Mary to make her known and loved to millions around the globe.

Father Patrick Peyton died on June 3, 1992, and his sainthood cause was opened almost a decade later in 2001. Pope Francis named declared him to be Venerable on Dec. 18, 2017. In order for him to move on to the next stage of sainthood and be beatified, a new miracle must be identified and validated as being an instantaneous, complete and lasting cure with no effective medical intervention.

On Hope and the Holy Spirit