This Man Survived a 60-Foot Fall, Thanks to Father Patrick Peyton’s Prayers 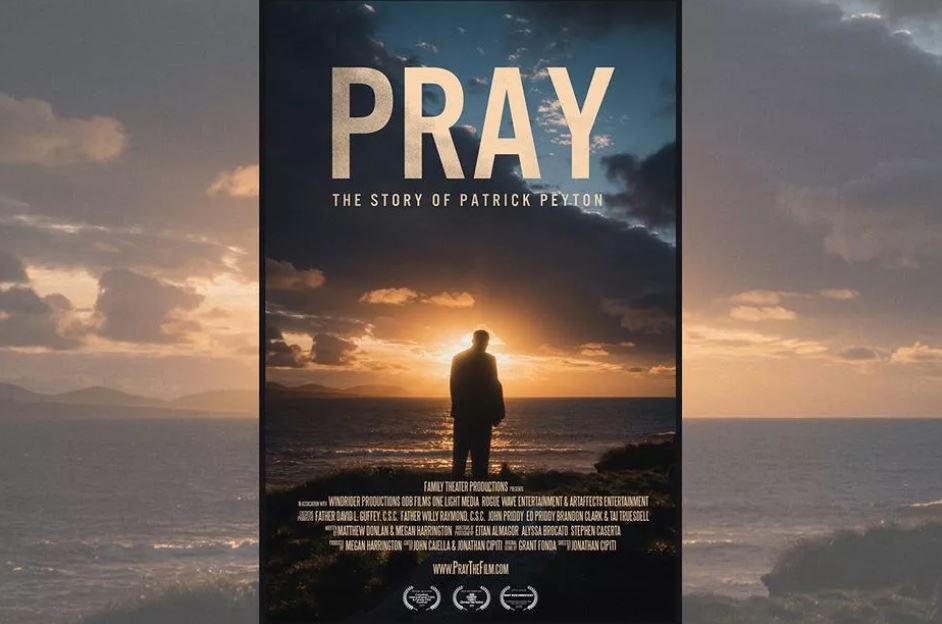 This Man Survived a 60-Foot Fall, Thanks to Father Patrick Peyton’s Prayers

The healing is not being investigated as a potential miracle for Father Peyton’s beatification because it occurred while the priest was still alive, but family members still credit Father Peyton for Denny Leonard’s dramatic recovery.

“Denny Leonard looked at his watch: It was one minute before 12. Soon the weekend whistle would blow, and Denny would quit work and go home. It was Saturday, and the whole weekend was ahead. He’d spend the time with his wonderful wife and the three swell kids. On the weekend, he just lies around and takes it easy – maybe takes the kids to the park….”

John Leonard is reading aloud the story of his father Denny from a worn pamphlet published by The Family Rosary. John’s pamphlet, he tells me proudly, bears the signature of Father Patrick Peyton, the “Rosary Priest.” It tells the story of Father Peyton, and part of that larger story is the story of John Leonard’s dad, Denis “Denny” Leonard — a story that takes a dangerous turn.

Denny Leonard was a bricklayer in Schenectady, New York, working on flimsy scaffolding high above the streets. He was about to lay just one more brick, then head for home; but as his son John told the story, Denny lost his balance and plunged six stories (65 feet) to the sidewalk below. His arms, his legs, his back — all were broken when he hit the concrete. His head soon swelled to three times its normal size. The paramedic, en route to the hospital via ambulance, could find no pulse. A neighbor drove Mrs. Leonard, who had three children and was expecting their fourth, to the hospital, where doctors warned her that her gravely injured husband would most likely not survive the night.

But then Mrs. Leonard called their family friend, Father Patrick Peyton. Father Peyton was a frequent visitor at the Leonard family dinner table, where Mrs. Leonard served his favorite dinner of corned beef and cabbage. Father Peyton visited Denny in his hospital room. He asked everyone to leave, and he prayed over Denny, asking Our Lady to intervene with her Son and begging that Denny Leonard might be permitted to live. Denny Leonard did, in fact, survive the devastating injuries, and the Leonards went on to raise four more children.

The unexpected recovery is not being investigated as a potential miracle for Father Peyton’s beatification, because it occurred while the priest was still alive; nonetheless, John and Cecilia Leonard attribute their dad’s recovery to the power of Father Peyton’s earnest prayer.

I spoke with John Leonard and with his sister, Cecilia, about their memories of their late father and of their close family friend, Father Patrick Peyton. “When we were little,” said Cecilia, “Father Peyton would come over quite often to visit. My mother would serve dinner, then we’d pray the Rosary together. At least I think it was after — we were, after all, little kids.” Brother John remembered that story a little differently: “Before dinner,” John said, “we’d all kneel down and pray the Rosary.”

And Cecilia, recalling Father Peyton’s sense of humor, reported that sometimes after he’d finished leading the Rosary, Father Peyton would embark on the Litany of the Saints. Being only a young child, Cecilia felt the prayers would go on forever! “As kids,” Cecilia said, “we’d wonder, when are we going to be done?”

Cecilia and John recounted joyful memories of the famed Rosary Priest. His offices, Cecilia explained, were less than two blocks down the street from their home, and she and the other Leonard family members would sometimes visit him there. Cecilia remembered meeting the other priests and some of the women who worked for them. “When he talked to you,” she recalled, “you would feel like you were the only person in the room. He was amazing like that: He just loved talking to people. And he was great at writing letters!” Cecilia added that Father Peyton was always raising money for something. If she had 25 dollars, she would press it into his hand; later she would later receive a personal letter from him, thanking her for her gift.

The Leonard family supported Father Peyton’s work in other ways, too. Denny, whose healing the family attributes to Father Peyton’s intercession, passed a hat up and down the bar in the Hibernian Club, asking his friends to contribute to the Family Rosary. Denny owned a car; so he would often drive the priest around, introducing him to people, taking him to radio stations where he would be interviewed, trying to raise funds for his cause. Denny also used his bricklayer skills, constructing a chapel in Father Peyton’s offices and a small altar in the yard of a house where a wealthy owner welcomed him to lead in prayer.

But the longest-lasting contribution by the Leonard family was undoubtedly the institution of the annual Father Peyton Benefit (later called the Family Rosary Benefit Dance). John Leonard reported that his mother spearheaded the benefit, organizing it each year for 30 years. At its inception, the Father Peyton Benefit, which attracted 200 to 300 participants, charged 50 cents for admission. The dance began at 9:00 p.m., and John remembered leaving the hall at 4:00 a.m.

Years later, John Leonard continues to support the organization that Father Peyton founded. He explained the story behind his commitment. “My niece had a son Michael, who was 2 years old,” John said.

“Michael developed a brain tumor, which doctors called ‘inoperable.’ My sister watched the Today Show with Matt Lauer, and she heard that there is a pediatric surgeon who does this type of complicated surgery. She called the hospital; and the following day, they brought Michael to the hospital, where he had successful surgery. I made a pledge to Father Peyton that if Mikey came out of it okay, we’d carry on the dance.”

Mikey did, in fact, survive, suffering only a little paralysis on one side. Keeping his promise, John Leonard has continued to organize fundraisers to benefit the Family Rosary program.

The Leonards remembered other times when they relied on Father Peyton’s intercession. In the late ’80s, their brother John was hospitalized and the doctors believed that he had lung cancer. Father Peyton prayed over him, and the following morning, the doctors ordered a second set of x-rays; but this time, they found no evidence of cancer.

Both John and Cecilia Leonard are among friends and fans of Father Peyton who tell their stories in the film Pray: The Story of Patrick Peyton, which is currently playing in select theaters nationwide. Interested readers can learn more about the ongoing work of Father Peyton’s organization through their website, Holy Cross Family Ministries.