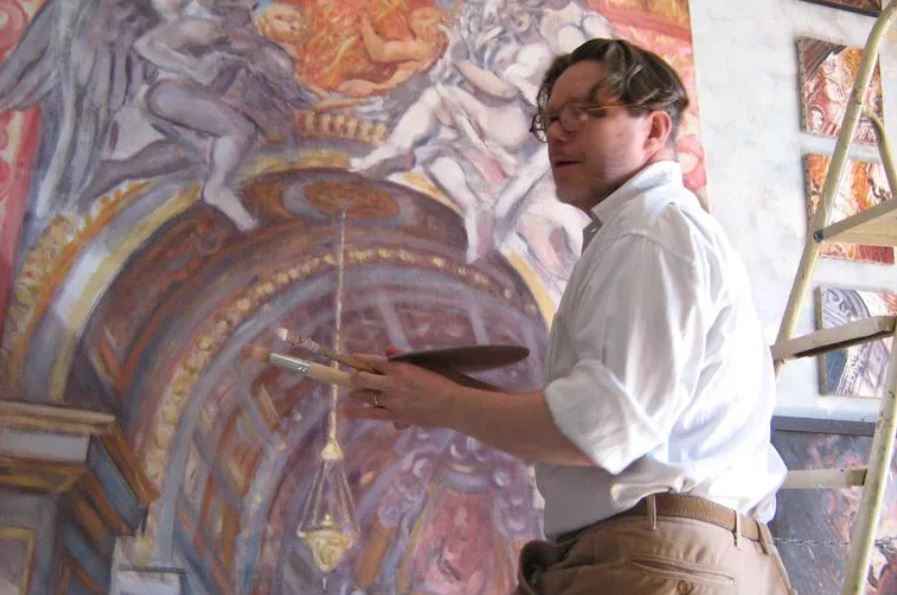 Over the past 20 years, French-born painter Philippe Casanova has been enriching the Roman cultural and artistic landscape with his original contemporary Baroque creations.

In the wake of the Council of Trent, as the Church of the Counter-Reformation era was striving to shape new cultural movements able to massively revive popular faith, the city of Rome was turned into a true breeding ground for artists.

After art became a privileged way to convey and make theological truths shine forth (at a time when aniconistic Protestant reformers fiercely criticized the abundance of artworks adorning Catholic churches), the Vatican rapidly stood out as one of the greatest arts patrons of Europe.

It was in this context of incredible artistic abundance that the Baroque movement emerged and durably rooted itself in the Italian capital of the 17th century, invading churches and palaces, before spreading across the rest of Europe. Greatly prized by the ecclesiastic authorities of that time, the Baroque style had the ability to exalt religious impulses, thanks to its emotional effects of color, the search for movement and the interplay of light and shadow that intensified and magnified the scenes depicted in paintings and sculptures, in an overall harmony.

And it is precisely this unique Baroque universe that has captivated Philippe Casanova four centuries later. Indeed, this French-born painter — to whom EWTN Vatican has recently dedicated a documentary — is applying himself to reviving this movement by revisiting it with his own artistic sensibility.

Genesis of a Vocation

A native Parisian, Casanova studied at the prestigious Ecole Nationale Supérieure des Beaux-Arts, after being a cartoonist for a few years. His deep vocation emerged while visiting abbeys in Central Europe, well known for bursting with Baroque treasures. It was then, inside the legendary Roman Church of the Gesù (the mother church of the Society of Jesus, whose Baroque façade introduced this movement into architecture in the 1570s), that he understood that his destiny would inexorably be linked to this glorious period of Western history. “This art literally bowled me over, as it completely responded to my quest for aesthetics and to my religious aspirations better than any other artistic expression,” Casanova told the Register.

Twenty-five years after this life-changing encounter led him to settle in Rome, his artworks are featured in exhibitions in prominent monuments of the Italian capital as well as in Paris, while commissions arrive for him from different countries. And just like during the golden era of Baroque, clergymen are among his solid supporters. In 2013, on the occasion of the fifth anniversary of the recognition of the Marian apparitions in Saint-Etienne-le-Laus (Southern France), the bishop of the Diocese of Gap and Embrun ordered from Casanova a monumental work for the sanctuary built on the site of the apparitions, with the sponsorship of the Pinault family.

Moreover, one of the artworks he cherishes the most, The Ectasy of St. Philip Neri (2015), is exhibited inside the Church of Santa Maria in Vallicella, St. Philip Neri’s historic oratory.

Christian Vision of the Human Condition

The “Third Apostle of Rome,” indeed, has played a major role in the painter’s life. The Italian saint (1515-1595) was, in his time, the promotor of countless cultural initiatives and was a fervent supporter of Baroque artists, as evidenced by his Roman Oratory designed by Baroque architect Francesco Borromini. “St. Philip Neri has always been a guide to me since I’ve arrived in Rome, and he has always helped me a lot. I’ve received a lot of orders throughout my artistic path, thanks to his intercession and through his congregation,” Casanova said.

As a special tribute to his patron saint, a few years ago he initiated a ceiling project for the nave of a Roman church on the theme of the Seven Pilgrim Churches of Rome, a pilgrimage instigated by St. Philip Neri. “It is a pilgrimage I’ve been doing for years, and this is how I’ve been so deeply enchanted by the beauty of Rome and that I better perceived its spiritual vocation.”

For Casanova, Baroque art will always have an intrinsic Christian dimension, mainly expressed by the play of light, which reflects the double and paradoxical dimension of the human condition, made of darkness, chaos, evil and suffering, but which is at the same time elevated by the promise of the glorious resurrection of bodies.

“When the world sinks into times of crisis and tribulations, heaven always invites itself on earth to inflame human souls and hearts, showing them the infinite beauty of creation, calling them to celebrate the glory of God,” he said. “This message [that] I want to express through my paintings makes invocation to the Holy Spirit indispensable; prayer is never absent from my work.”

The message of universality conveyed by Baroque art will never be out of style and therefore could never become anachronistic, according to Casanova, whose work is a clear reminder of that at a time when the very notion of beauty is often reduced to a mere subjective appreciation.

According to him, contemporary art’s rejection of beauty as an objective and timeless concept tends to lock it up in a dead end, making it unable to stand the test of time and transcend cultures. On the contrary, the search for beauty requires, in his view, “a certain degree of humility,” since it requires looking back at the examples of the great artists who have preceded our time in order to improve one’s skills and make one’s art truly whole.

“I wanted my work to be figurative; and to this end, I turned to the style that best corresponded to my personal aspirations. But I am drawing inspiration from this movement with as much freedom as possible, without slavishly imitating what was done centuries ago,” he continued. “I am totally aware of being a mind and a sensitivity rooted in my own time, and thus my goal is precisely to express and propose my reflections to other human views and intelligences of today, as well as to those who will come later, whatever their country, continent or civilization.”