This Sunday’s Readings Tell us About a Humble God 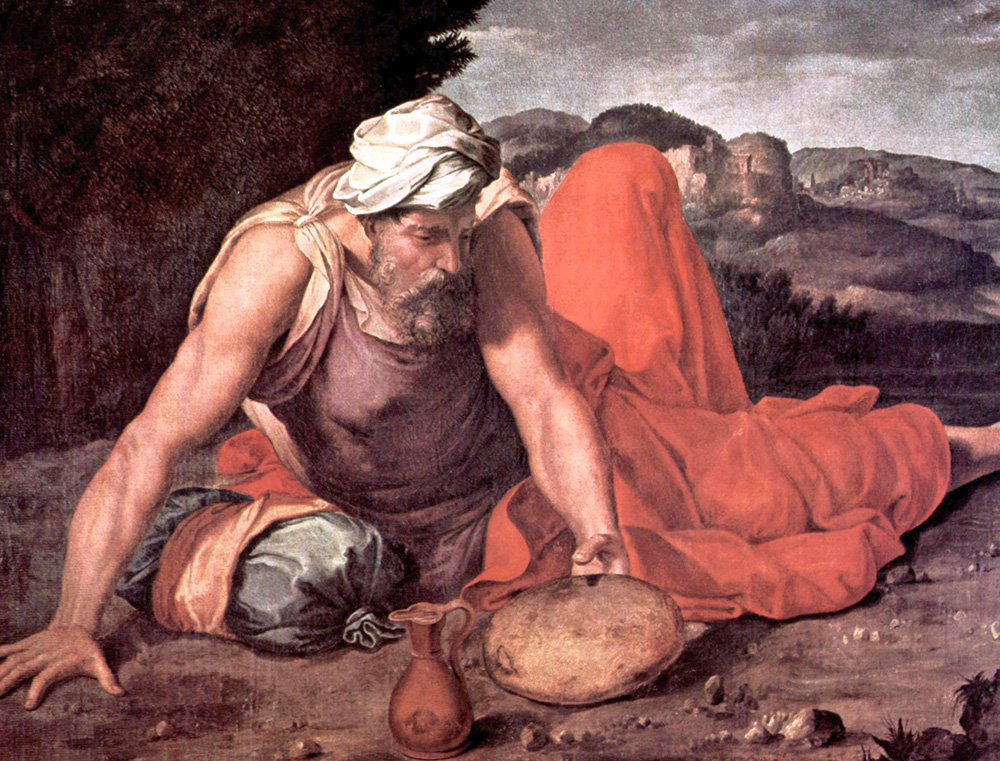 This Sunday’s Readings Tell us About a Humble God

Can you imagine Jupiter appearing in the whisper of the wind? No. But that’s what our God does.

The readings for the 19th Sunday in Ordinary Time (Aug. 9) tell us about a humble God.

Elijah the prophet hides in a cave on Mount Horeb (otherwise known as Mount Sinai). The First Reading doesn’t tell us the context: Elijah is on Mount Horeb because he is running away for his life. Ahab, one of Israel’s worst kings (there’s a reason why Melville named the obsessed captain ofMoby Dickas he did) introduced the worship of Baal and Astarte in Israel, at the behest of his pagan wife Jezebel. Baal and Astarte were fertility gods which (like in our own confused day), celebrated the sexual power by sacrificing infants to them and having their priests engage in self-cutting and other forms of self-mutilation. (Plus ça change…). Elijah challenged 450 of Baal’s prophets — he and they would each prepare an animal sacrifice and call down fire from heaven, to show who was the true God. 1 Kings 18 describes the event, in which Baal’s prophets are unsuccessful while Elijah — even though the altar is thrice doused in water — calls down what becomes a sacrificialflambé. “Then the people seized the prophets of Baal” and Elijah had them brought down to the Kishon Valleyand slaughteredthere” (1 Kings 18:40). Which didn’t go over too well with Queen Jezebel, who now sought Elijah’s life.

So Elijah is hiding in a cave and, like most of us when in desperate situations, wonders where God is. God tells him to stop hiding in the cave and go outside, where the Lord of Hosts would pass by. Elijah sees a lot of grand, even frightening things: a hurricane playing catch with rocks, an earthquake, and a fire. But no God. Then “there was a tiny whispering sound. When he heard this, Elijah hid his face in a cloak, and went and stood at the entrance of the cave” (1 Kings 19:13). His God had come to him.

Not only that, he spoke to him, telling him essentially to “be not afraid,” return to the Holy Land and anoint a new king and his own successor, Elisha.

The First Reading and the Gospel are usually thematically related. In today’s Gospel, the disciples are out on a tempestuous sea. They, like Elisha, are afraid: the weather outside is frightful and the boat hardly delightful. Jesus comes to them, walking across the water. Peter doesn’t believe what he sees, and challenges Jesus to invite him to do the same. Consider: to do what Peter did required faith —a man who didn’t believe would not have gotten out of a boat in the middle of a stormy lake.Peter did and, for a moment, all is fine — until his “common sense” gets the better of his faith and ends his career in aquatic strolling.

In the Gospels, Jesus’s miracles can basically be reduced to two types: miracles of nature and healing miracles. Although today’s Gospel features a miracle of nature, those kinds of miracles are the minority in the Gospels. Most of Jesus’ miracles are healing miracles., which reveal his Mission — “I came that they might have life, and have it to the full” (John 10:10) — restoring the whole man, body and soul, a process to be completed in the ultimate healing miracle, the resurrection of the body on the Last Day.

Jesus’ miracles over nature — walking on the lake today or calming a storm (Matthew 8:23-37, but note the chapter includesthreehealings) — point to Jesus as Cosmic Lord of heaven and earth. That is the Lord who will come in glory. It’s no accident that the Last Judgment scene over the main altar in Washington’s Basilica of the Immaculate Conception is Christus Pantocrator. “He will come againin gloryto judge the living and the dead…..”

But, like Elijah, it’s not the way God normally has come into peoples’ lives. He usually comes with much less fanfare. Think William Holman Hunt’s painting,“The Light of the World”(Jesus knocking at the door of one’s heart). Think James Allen Francis’s essay,“One Solitary Life”(“He was born in an obscure village ….”)

Consider his advent in Bethlehem, “least among the clans of Judah,” as a little child. A little child is utterly dependent, utterly vulnerable, utterly incapable of any kind of force or coercion but that of love. That is why the Ven. Stefan Wyszy?ski, Poland’s great primate under communism, reminds us that theInfant Jesus seeks to disarm usby the only tool a baby has: love.

Babies are, after all, expendable. That seems cruel and thoughtless, but for considerable swaths of human history, from unprepared mothers to crazed votaries of pagan Baals, from the sophisticated ancient Romans who abandoned newborns in the woods to the sophisticated modern Americans who slay them in the womb, the lives of children have been cheap. Given that, would one expect a deity to come as a baby and “grow in wisdom and age and grace?”Theirkings and queens arrive on elephants;ourscame on donkeys.

No, that was not the way of the ancient world. Those of us with children today get treated to a replay of various myths, from Disney’sHerculesto Marvel’sThor,pale pastel shades of their forms in Antiquity.

What was true of ancient gods and goddesses was … they made a lot of noise. Before becoming the sensitive, insecure dud(e) of the silver screen, Thor threw around a lot more thunderbolts. So did Zeus. Hades was ready for the world to go to Hades at the Titans’ hands, while Poseidon was not above the occasional whirlpool to throw an Odysseus or a Perseus off course.

Can you imagine Jupiter appearing in the whisper of the wind? The only time he put in a quiet appearance was when he planned on raping a mortal woman.

But “I am the Lord, Your God. You will have no strange gods before me.”

Yet, in some ways, our Godisstrange. He’s strange because he does not act like the great and the glorious, of gods and men, might be presumed to act. “Do not blow your horns before you” (Matthew 6:2) counsels Christ, whose own advent in this world was in keeping with his advice.

But our God does this because he is, in some sense, a “respecter of persons.” The full glory of God is such that we could not resist him. But God wants to leave us freedom, which runs the risk of resisting him. Only in that way is there love. So he comes to us … in the breath of the wind and as a little Child, inviting us to get out of “our fragile barques” and walk with him“o’er life’s tempestuous sea.”

Pope Francis: Even in times of dar...