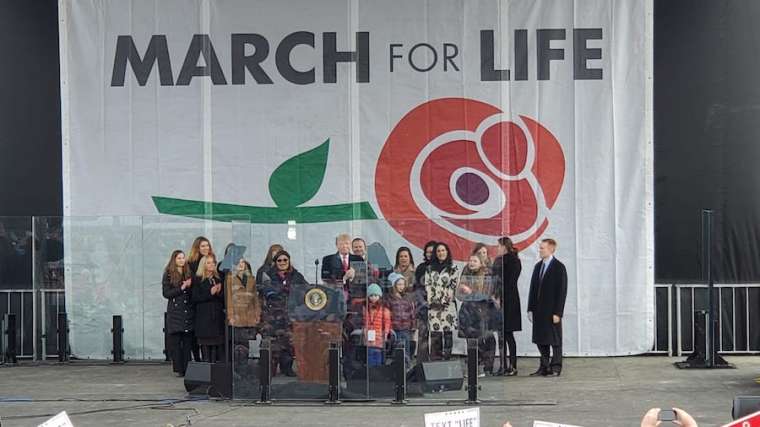 The Trump campaign has added bullet points concerning abortion and religious freedom to its list of second-term priorities, along with points regarding the nomination of federal judges and the Second Amendment.

The points, listed under the heading “Defend American Values”,were not originally part of Trump’s 50-point “core priorities” list, which was published by the campaign Aug. 23. They are believed to have been added over the weekend.

The president initially faced pushback from some Catholics for omitting mention of abortion and religious liberty from the original list.

Of the original list, pro-life advocate Lila Rose asked on Twitter, “why isn’t a single one the protection of preborn children or stopping the abortion industry from killing 2300 innocent children every day?”

“President Trump can defund Planned Parenthood by executive order. It’s past time to stop pouring millions of taxpayer dollars into a corporation that slaughters 900 children each day. Defund these atrocities,” Rose added.

At the Republican National Convention, several speakers emphasized Trump’s opposition to abortion, including Sr. Dede Byrne, a surgeon and retired Army colonel, who called Trump the “most pro[life president” in U.S. history.

In other contexts, Trump has himself said that he would work to end legal protection for abortion. The president has put a moratorium on federal funding for international aid groups that provide abortions, and pushed back on UN abortion advocacy amid the coronavirus pandemic.

Trump has also called for an end to federal funding for Planned Parenthood, but while the administration has made some moves in that regard, the abortion provider remains the recipient of roughly $500 million annually in Medicaid reimbursement.

Trump’s Democratic opponent in the presidential race, Joe Biden, has pledged to enshrine abortion protections in federal law, and House Speaker Nancy Pelosi indicated this week thatCongress will end a decades long moratorium on federal funding for abortion if her party retains control of the House of Representatives.

In response to questions from CNA regarding the additional points added to its second term agenda and their original omission, a campaign spokesperson told CNA that Trump “will continue to lay out his second term agenda over the coming weeks, and will be sharing additional details about his plans through policy-focused speeches on the campaign trail.”