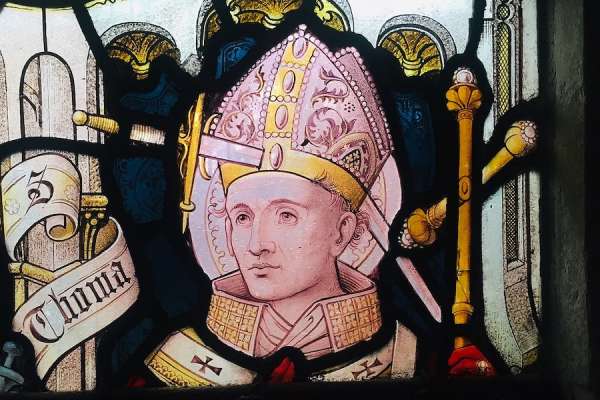 The White House on Tuesday issued a proclamation praising St. Thomas Becket, an English archbishop who was martyred 850 years ago after conflict with King Henry II over the rights of the Church.

“Before the Magna Carta was drafted, before the right to free exercise of religion was enshrined as America’s first freedom in our glorious Constitution, Thomas gave his life so that, as he said, ‘the Church will attain liberty and peace,’” President Donald Trump wrote in a Dec. 29 proclamation.

“To honor Thomas Becket’s memory, the crimes against people of faith must stop, prisoners of conscience must be released, laws restricting freedom of religion and belief must be repealed, and the vulnerable, the defenseless, and the oppressed must be protected. The tyranny and murder that shocked the conscience of the Middle Ages must never be allowed to happen again. As long as America stands, we will always defend religious liberty.”

“We pray for religious believers everywhere who suffer persecution for their faith. We especially pray for their brave and inspiring shepherds — like Cardinal Joseph Zen of Hong Kong and Pastor Wang Yi of Chengdu — who are tireless witnesses to hope,” Trump’s proclamation added.

Becket was born in the twelfth century, and became an expert in canon and civll law, and eventually the Lord Chancellor of England. But after 1162, when he became Archbishop of Canterbury, he found himself in conflict with King Henry II over the autonomy of the the Church in England. Becket and the king clashed over the freedom of clergymen from secular courts, and, in 1164, the Constitutions of Clarendon, a set of laws passed by Henry II in an effort to limit papal authority and ecclesiastical courts in England.

Becket did not accept the Clarendon laws, and was briefly exiled. On Dec. 29 1170, knights supportive of King Henry murdered Becket at Canterbury cathedral, shortly after the bishop had prayed vespers.

“When the Archbishop refused to allow the King to interfere in the affairs of the Church, Thomas Becket stood at the intersection of church and state. That stand, after centuries of state-sponsored religious oppression and religious wars throughout Europe, eventually led to the establishment of religious liberty in the New World,” Trump’s proclamation said.

“Thomas Becket’s martyrdom changed the course of history. It eventually brought about numerous constitutional limitations on the power of the state over the Church across the West. In England, Becket’s murder led to the Magna Carta’s declaration 45 years later that: ‘[T]he English church shall be free, and shall have its rights undiminished and its liberties unimpaired.’

“Thomas Becket’s death serves as a powerful and timeless reminder to every American that our freedom from religious persecution is not a mere luxury or accident of history, but rather an essential element of our liberty. It is our priceless treasure and inheritance. And it was bought with the blood of martyrs,” the president added.

Trump’s statement called for an end to religious persecution around the work.

“A society without religion cannot prosper. A nation without faith cannot endure — because justice, goodness, and peace cannot prevail without the grace of God,” it concluded.