Trump to UN: Protect the unborn and religious minorities 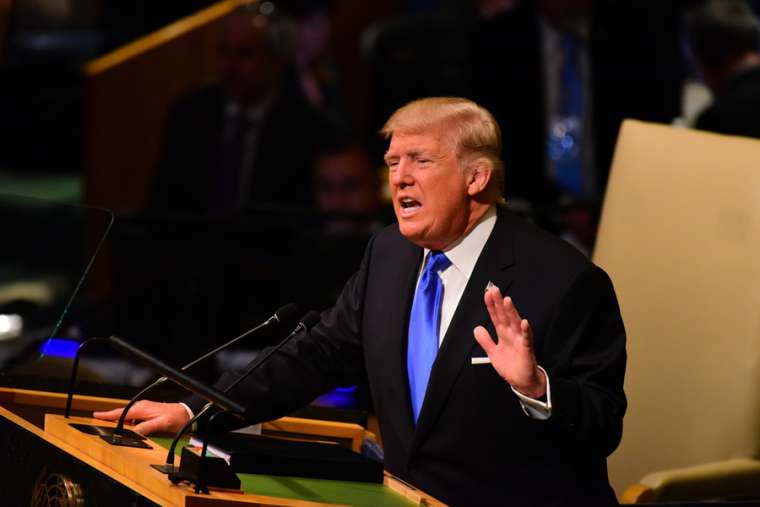 Trump to UN: Protect the unborn and religious minorities

President Trump told world leaders that the United States is committed to “protecting unborn children” in remarks to the United Nations General Assembly (UNGA) from the White House on Tuesday.

“America will always be a leader in human rights,” Trump said in his speech to the UNGA from the White House. Due to the ongoing coronavirus pandemic, world leaders were invited to deliver their speeches to the assembly remotely, and they were then broadcast as “live.”

“My administration is advancing religious liberty, opportunity for women, the decriminalization of homosexuality, combatting human trafficking, and protecting unborn children,” the president said.

This year marks the 75thanniversary of the founding of the United Nations.

Trump previously raised the defence of the unborn in his 2019 address to the UNGA, saying that “like many nations here today, we in America believe that every child, born and unborn, is a sacred gift from God.”

Trump’s administration has sought to redirect U.S. foreign assistance away from foreign non-governmental organizations (NGOs) that provide or promote abortions, under the Mexico City Policy

While the Mexico City Policy applied to about $600 million in USAID family planning assistance, the administration expanded it to include billions of dollars in global health assistance and is now seeking to apply its conditions to military and government contracts with foreign NGOs.

The administration stopped funding the UN’s population fund (UNFPA) because of its partnership with China, where the Communist government’s two-child policy is enforced through forced abortion and sterilization. It also reduced funding for the Organization of American States after one of its organs apparently lobbied for abortion.

Trump’s remarks echoed those of the Holy See, also given at the UN this week.

Cardinal Pietro Parolin, the Vatican’s Secretary of State, addressed a high-level meeting at the UNGA on Monday, commemorating the 75thanniversary of the UN.

“The UN has strived to champion universal human rights, which also include the right to life and freedom of religion, as they are essential for the much needed promotion of a world where the dignity of every human person is protected and advanced,” he stated.

On Tuesday, Trump also called on the UN to “focus on the real problems of the world,” which he said included “human and sex trafficking, religious persecution, and the ethnic cleansing of religious minorities.”

Trump also used his address to criticize China for its response to the new coronavirus pandemic, as well as its pollution of oceans and high rate of carbon emissions.

Although Trump criticized China and called on the UN to attend to religious persecution, he did not mention China’s mass imprisonment of an estimated 800,000 to 1.8 million Uyghurs and other ethnic minorities in its northwest region.

The largely-Muslim ethnic population has reportedly been subject to forced birth control and sterilization, repression of religious practice, mass surveillance, and forced labor, and detainees have suffered indoctrination and torture.

Trump also defended the U.S. decision to withdraw from the Paris Climate Accord, saying that the country reduced its carbon emissions more than any other country in the accord last year.

Pope Francis in his 2015 speech at the UNGA, praised the Paris agreement as a step that could “secure fundamental and effective agreements” to protect the environm