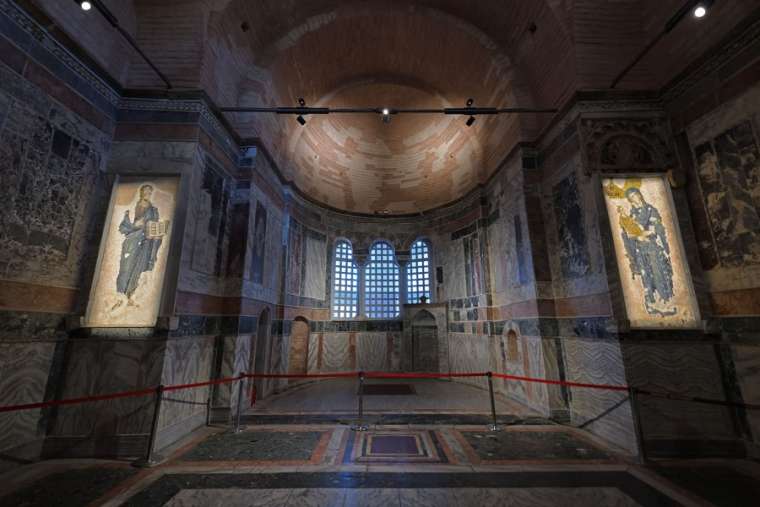 A month after the former cathedral Hagia Sophia was converted from a museum into a mosque, another Istanbul church-museum, renowned for its exquisite Byzantine mosaics, will undergo the same transformation.

The building’s history mirrors that of the famous former Byzantine cathedral Hagia Sophia.

Holy Savior in Chora is a 4th-century Greek Orthodox church whose structure was originally part of a monastery in Byzantine Constantinople.

The church’s current form, instead, dates from the early 14th century. It is highly valued for its masterful mosaics and frescoes.

After the Ottoman conquest of Istanbul in 1453, the church was taken for Muslim worship, and the wall paintings and mosaics thinly covered with dye and lime.

In 1945, the secular Turkish republic declared the building a national monument, and extensive restoration and conservation work was carried out on the former church’s artworks before it opened as a museum in 1958.

Like Hagia Sophia, the building is designated a UNESCO World Heritage site.

In November 2019, Turkey’s top administrative court, the Council of State, ruled the structure should return to use as a mosque, on the basis that the museum was unlawful for violating the Ottoman declaration that the building be used for Muslim worship.

This ruling was used as precedent for the court’s controversial July decision to convert the former cathedral Hagia Sophia from a museum back into a mosque.

Erdo?an ordered Aug. 21 that Chora Church, a much-visited site in the Fatih district of Istanbul, be turned into a mosque and opened for Muslim worship.

Other church-museums in Turkey, including less notable Hagia Sophias in the towns of ?znikand Trabzon, have also been converted back into mosques in recent years.

Historian Fabrice Monnier told French newspaper Le Figaro that he believedthe situation with Chora Church was different from that of other mosque reconversions, because of the size of its paintings and mosaics.

“Its beautiful mosaics and frescoes cover almost all the church’s walls and domes,” he said. “It would be hard to imagine it being returned into a mosque without totally covering them over.”

The Hagia Sophia and Chora decisions are thought to be an effort by Erdo?an to appeal to Muslim voters after the president’s party, AK, lost the Istanbul mayoral election in 2019.

How can you explain to non-Catholi...