Ukrainian Catholics in US provide aid to victims of Ukraine floods 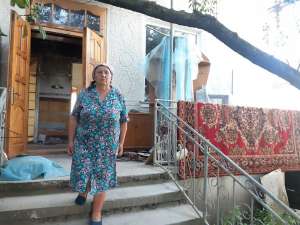 Ukrainian Catholics in US provide aid to victims of Ukraine floods

Ukrainian Catholics in the US have donated more than $136,000 to assist the victims of the floods that have devastated western Ukraine.

The fundraising effort has been coordinated by Bishop Andriy Rabiy, auxiliary bishop of the Ukrainian Archeparchy of Philadelphia.

Flooding in Ukraine’s Ivano-Frankivsk and Chernivtsi oblasts in late June hit some 300 towns, with at least as many miles of road damaged or destroyed. Gas supplies to some 10,000 people were disrupted.

“There is very little or no help received from the government. People really appreciate help they get from Caritas and our contributions and are amazed how quickly they receive that what they need,” Bishop Rabiy stated.

“In the Gospel, we hear the story of how Jesus multiplied the fishes and the loaves. He took five loaves and two fish, blessed, multiplied this small offering and fed over 5000 people. So it is with us. What we offer, Our Lord will bless and multiply to provide for the needs of those suffering from the destruction of this tragic flood,” said Bishop Rabiy, according to the statement.

“Your generous support will make a big difference in the lives of our brothers and sisters in need. Thank you to each and every one of you for your contribution to this flood relief effort. We are most grateful and appreciative of your sacrificial giving.”

Bishop Rabiy told CNA that many people in the country already struggle with finances and poverty. He said the affected region in particular survives off of farming, or migration to other cities or countries.

“Overall in the country, they do have a huge economic hardship, but this region, in particular, that was hit by floods and mudslides, it’s a very poor region. There are very few jobs that people can find. They basically have to travel abroad or into other major cities in Ukraine to find a job and actually support their families,” he said.

Bishop Rabiy said that following the heavy rains, a majority of people have had their basements flooded, wiping out a large portion of their food supplies. He also said strong currents have forced large boulders onto people’s properties, which will need to be removed before farming continues.

He said it will be sometime before property owners can return to normal. It has been a high point of distress for the victims, he said, noting that farmers had taken out loans to fund their agriculture but now have no means to pay it back.

“For the occupants of the mountains, that’s where many mudslides took place, and basically that’s dirt with stones, sometimes as high as three, four feet, it actually came into people’s gardens,” he told CNA.

“Whatever they were growing this year, it’s all gone. It is going to take several years before they actually get back to normal,” he added. “I hear human stories how people try to commit suicide because they took on a loan … and now that everything is gone. That’s a very sad story and that happens too.”

He said the donations are issued on a person by person basis, trying to connect the individuals with the help they need to survive. He said the donations may go toward food, water, medicine, but it may also offer people grants to buy buildings supplies, furniture, and bedding prior to winter. He said families are entered into a database and organized by the greatest need.

Funds were given to the Ukrainian Archeparchy of Ivano-Frankivsk, and its suffragan eparchies of Chernivtsi and Kolomyia.

Bishop Rabiy expressed the importance of acts rooted in charity: “It is a part of our Christian matrix, I believe this is who we are, even if we open up the letters of Saint Paul, there he was asking people … to start putting something away because on the way back to Jerusalem he is going to take the gifts … for the starving people down in Jerusalem,” he told CNA.