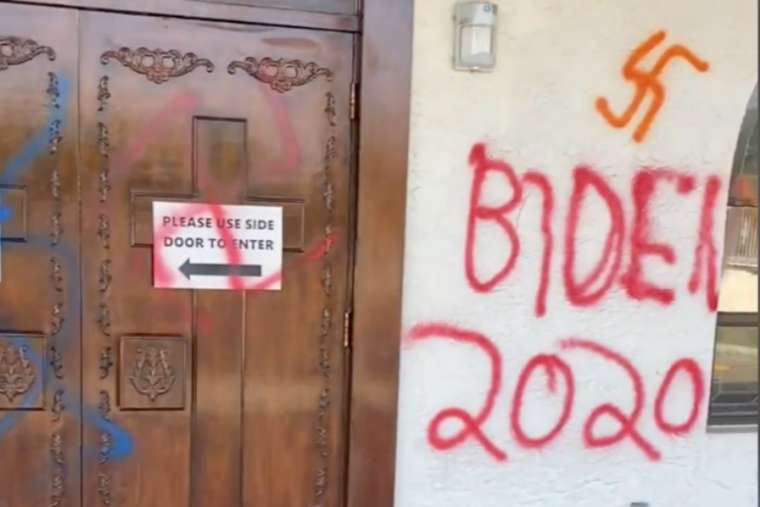 The U.S. bishops’ religious freedom chair has called for better protection of churches and other houses of worship, following a recent series of acts of vandalism.

Archbishop Thomas Wenski of Miami joined other religious leaders in a letter to congressional leaders on Monday, asking for quadrupled funding of a federal security grant program for non-profits.

“Our sacred spaces have been desecrated, and our faithful murdered,” Archbishop Wenski and other Christian, Jewish, Muslim, and Sikh leaders said in their letter. They wrote that “we believe that all people ought to be free from fear when gathering for religious worship and service.”

According to FBI statistics cited in the letter, at least 1,244 hate crimes were committed in 2018 against members of the various denominations and congregations represented.

FBI director Christopher Wray, in his testimony before the Senate Homeland Security and Governmental Affairs committee on Sept. 24, said that houses of worship are increasingly becoming preferred targets by “lone wolf” attackers.

“The greatest threat we face in the homeland is that posed by lone actors radicalized online who look to attack soft targets with easily accessible weapons,” Wray said. Many of these attackers choose targets “which recently have more and more included large public gatherings, houses of worship, and retail locations.”

Archbishop Wenski and the other leaders asked that funding for the Nonprofit Security Grant Program be quadrupled in 2021 to $360 million. The program enables beneficiaries to make security improvements, such as training or emergency planning, upgrading security systems, or making renovations.

Only one-third of applications considered for the program were funded in the 2019 fiscal year, according to the U.S. bishops’ conference.

“At a time of increasing extremism and antagonism towards different religious groups and religion in general, we believe significant increased funding for this important government program in fiscal year 2021 is imperative,” the letter stated.

While Catholic churches and other houses of worship were vandalized or attacked in recent years—including deadly mass shootings at synagogues in Pittsburgh and California in 2018 and 2019—attacks have been reported all around the country over the summer and into the fall.

In September, for example, statues were toppled and destroyed at churches and cathedrals in Utah, New York, and Texas. Acts of arson were suspected, investigated, or determined at churches in Florida, Boston, and California over the summer, and statues at other churches were vandalized in Tennessee, California, and Colorado.

According to a recent EWTN News/RealClear Opinion Research poll, more than 60% of Catholics surveyed said they were “very concerned” about churches being vandalized.

Kamala Harris and her pro-abortion...