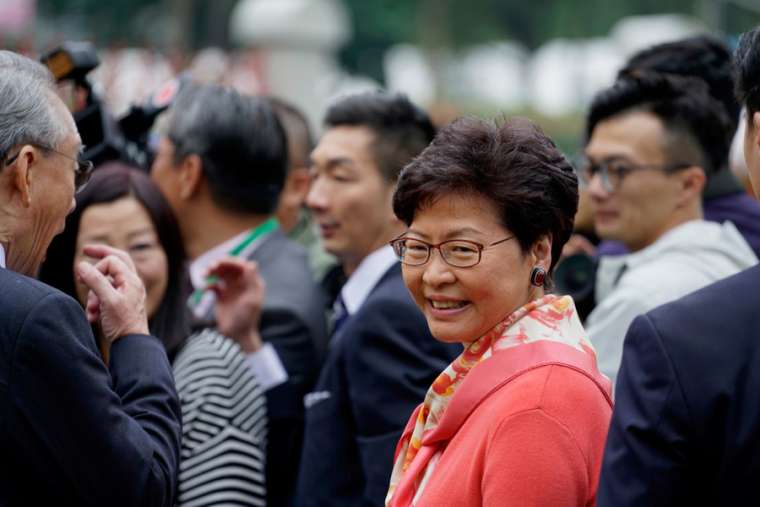 The United States announced sanctions against Carrie Lam, the leader of the government of Hong Kong, as well as other officials in China on Friday, August 7. The sanctions were issued in response to recent actions by the Chinese government to curtail civil liberties in Hong Kong.

“The United States stands with the people of Hong Kong and we will use our tools and authorities to target those undermining their autonomy,” said Secretary of the Treasury Steven T. Mnuchin in a statement released on Friday by the Treasury Department.

Hong Kong Chief Executive Carrie Lam was cited for her attempts to pass a controversial extradition law in 2019 which, Mnuchin said, caused “a series of massive opposition demonstrations in Hong Kong” last year, as well as Lam’s role in “developing, adopting, or implementing the Law of the People’s Republic of China on Safeguarding National Security in the Hong Kong Special Administrative Region.”

On July 1, a new National Security Law went into effect in Hong Kong. The law has been harshly criticized by politicians from both major parties in the United States as a clear violation of the civil liberties guaranteed to Hong Kong under the “one country, two systems” policy agreed at the time of the territory’s handover from Great Britain.

The details of the U.S. action were not disclosed in the announcement. The decision follows previous measures by the administration against Chinese government officials who have contributed to the ongoing detention of more than 1 million Uighur Muslims in Xinjiang. The Chinese government responded by sanctioning several prominent U.S. politicians who had spoken out against China’s treatment of ethnic minorities, including Ambassador-at-Large for Religious Freedom Sam Brownback.

“When Beijing announced its intention to pass the National Security Law, so-called, we were concerned. It was frightening,” said Speaker of the House Nancy Pelosi (D-CA) at a July 1 hearing titled “The End of One Country, Two Systems?: Implications of Beijing’s National Security Law in Hong Kong.”

“[The law] is nothing short of an all-out effort to negate the rights of the people of Hong Kong in violation of the agreements made under the ‘One Country, Two Systems,’ said the California Democrat.

Pelosi said that Congress had long been concerned about the law’s final form, but the text of the legislation “exceeds even those horrors.”

The sanctions against Lam and other officials came just hours after President Donald Trump signed an executive order that effectively banned the popular app TikTok. TikTok is owned by a Chinese company, ByteDance. The executive order banned any transactions between American companies and ByteDance.

TikTok has been criticized for its extreme amount of personal data collection, its censorship of videos related to the Hong Kong protests and the detention of Uighurs in Xinjiang, and its promotion of conspiracy theories related to COVID-19.

“TikTok automatically captures vast swaths of information from its users, including Internet and other network activity information such as location data and browsing and search histories,” said the executive order. “This data collection threatens to allow the Chinese Communist Party access to Americans’ personal and proprietary information — potentially allowing China to track the locations of Federal employees and contractors, build dossiers of personal information for blackmail, and conduct corporate espionage.”

TikTok has also beencriticizedfor having a lack of child safeguarding features. The app does not have an option to make a profile private, and various safety restrictions on the app automatically turn off after a 30-day period.

The National Center on Sexual Exploitation cited TikTok for a “lack of moderation” and the ability for children to be sexually groomed, and listed the app in its annual “Dirty Dozen” roundup of the worst companies that are enabling sexual exploitation.