US senators join criticism of Disney for filming Mulan in Xinjiang 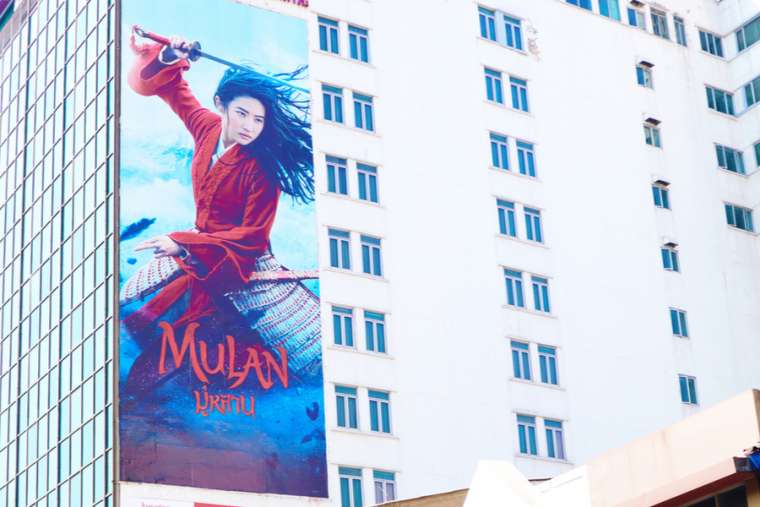 US senators join criticism of Disney for filming Mulan in Xinjiang

At least two U.S. Senators have joined the chorus of outrage against The Walt Disney Company after the company revealed it worked with Chinese propaganda departments in the Xinjiang autonomous region during the filming of Mulan.

“The ancient Chinese folktale of Hua Mulan is inspiring,” said Sen. Ben Sasse (R-NE) in a Sept. 9 letter sent to Bob Chapek, the CEO of The Walt Disney Company. “Disney’s partnership with a genocidal dictatorship is appalling.”

In the closing credits for Mulan, a live-action remake of the 1998 animated film of the same name, Disney gave a “special thanks” to, among other entities, the “Publicity Department of CPC Xinjiang Uyghur Autonomous Region Committee,” and the “Turpan Municipal Bureau of Public Security.” Parts of the movie were filmed in Xinjiang, which is located in northwestern China. The majority of the Uyghur population, a minority ethnic group that is mostly Muslim, resides in Xinjiang.

“The Publicity Department of the CPC Municipal Committee has pushed propaganda justifying the nature and purpose of the ‘re-education facilities,’” wrote Sasse, who noted that the Turpan Bureau of Public Safety is part of a larger entity that was recently sanctioned by the Department of the Treasury for its role in the operation of the detention camps in the region. The camps detain mostly Uyghur prisoners, who can be sent there for offenses such as “celebrating an Islamic holiday” and “wearing traditional religious clothing.”

The Chinese government claims the camps are for terrorism prevention purposes. Women who have been imprisoned in the camps have told stories of forced abortions and sterilizations.
Sasse stated that there needs to be a “deeper understanding of (Disney’s) production process” due to the company’s “willingness to partner with those committing genocide.” He requested additional information regarding when Disney was working in Xinjiang, as well as information regarding the agreements Disney made with the Chinese government when filming, and if the company raised concerns about human rights abuses in the region.

“Can Disney verify that the filming of Mulan did not benefit from Xinjiang-based forced labor,” asked Sasse, along with a request for information regarding any editorial requests made by the Chinese government.

Sen. Josh Hawley (R-MO), who was sanctioned by China earlier this year, wrote a similarly worded letter to Chapek on Wednesday, noting that China’s human rights abuses in Xinjiang were well-documented by the time Disney began production on Mulan in August 2018.

“Disney’s whitewashing of the ongoing Uighur genocide is contrary to all of your company’s supposed principles,” wrote Hawley.

“Just a few weeks ago, for instance, you wrote about the need to ‘confront the inscrutable idea that the lives of some are deemed less valuable—and less worthy of dignity, care and protection—than the lives of others,’” said Hawley. “Elsewhere, Disney has declared its commitment ‘to providing comfort, inspiration, and opportunity to children and families around the world’ and described its ‘commitment to respect human rights’ as a ‘core value.’”

Filming in Xinjiang and working with those committing human rights abuses is a violation of these values, said Hawley.

“How does glorifying the Chinese authorities perpetrating abuses in Xinjiang provide comfort, inspiration, and opportunity to Uighur children—including those who were never born because the CCP forced their mothers to abort them,” asked Hawley. “Disney’s actions here cross the line from complacency into complicity.”

Hawley requested that Disney donate the profits from Mulan to non-governmental organizations that are fighting human trafficking and “other atrocities underway in Xinjiang.”

The Walt Disney Company’s decision to work in Xinjiang and cooperate with Chinese Communist Party entities is interesting given that the company has been outspoken on what it perceives as human rights abuses in the United States.

In May 2018, Disney’s then-CEO Bob Iger said that it would be “difficult” for Disney to continue making movies in Georgia if the state moved to ban abortion after the detection of a heartbeat.
“Many people who work for us will not want to work there” should the law go into effect,” Iger told Reuters at the time. “We will have to heed their wishes.”
The law has repeatedly been blocked and cannot be enforced by the state of Georgia.

Jewher Ilham, a Uyghur Human Rights Fellow at the Victims of Communism Memorial Foundation whose father was abducted by the Chinese government, told CNA that she believes Disney needs to become more aware of what is happening around the world.

“Disney needs to better educate themselves about the human rights abuses committed around the globe, especially in China,” she said. “Egregious human rights violations take place there every day at the hands of the Chinese Communist government. It’s amazing to me to see how the same company has such firm stances stateside but is willing to give in to China in order to make a profit.”

“If Disney’s stance on abortion was enough to make them boycott filming in Georgia, then they should have boycotted filming in the Uighur region where some of the world’s worst human rights abuses are taking place,” she added.

Denise Harle, senior counsel with Alliance Defending Freedom, told CNA that Disney choosing to film in Xinjiang was “hypocrisy,” and that she believes “consumers should take notice.”

“Disney threatened to halt all plans to film in the state of Georgia over its pro-life laws but does not hesitate to film in China, where egregious human rights abuses are consistently committed, including forced sterilizations and abortions,” said Harle.

“Mulan was filmed in Xinjiang, China, the very region where more than one million Muslims are being held in detention camps because of their beliefs. While some companies put profits over people, Americans should remember that all human life, born and unborn, is worthy of protection,” she said.

The film has also been criticized because its lead actress, Liu Yifei, has expressed support for police in Hong Kong cracking down on protests of the Hong Kong extradition bill last year.

The Chinese government admitted in October 2018 that “re-education camps” for members of the Uyghur population had been established. The camps were first spotted on satellite imagery in 2017.

The highest estimate sets the total number of inmates in the camps at 3 million, plus approximately half a million minor children in special boarding schools for “re-education” purposes.