Vandal takes baseball bat to Catholic seminary in Texas, but none harmed 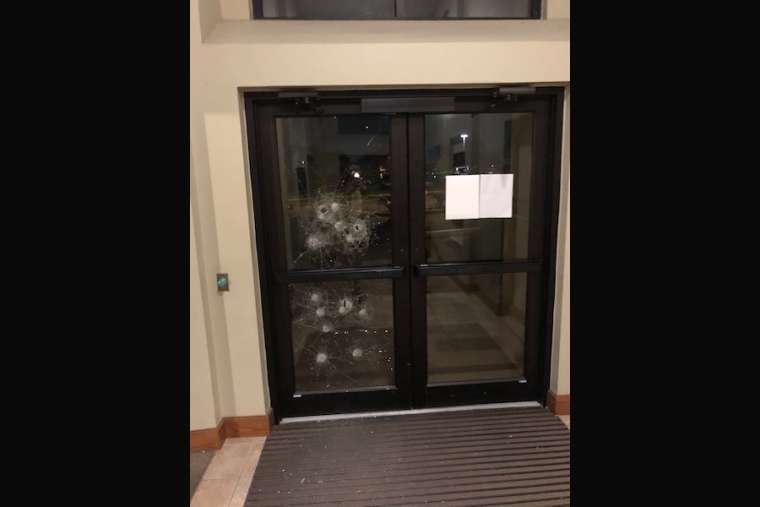 Vandal takes baseball bat to Catholic seminary in Texas, but none harmed

A man who wielded a baseball bat on the grounds of a Catholic seminary in Texas damaged a crucifix and several doors, but caused no harm to seminary students. The seminary asked for prayers for the unknown perpetrator and warned against a rush to judgment.

“Assumption Seminary in San Antonio received damage to an outdoor crucifix and five glass doors of the discernment house on campus during an act of vandalism which occurred at just after 10 p.m. on September 24,” Jordan McMorrough, communications director for the San Antonio archdiocese, told CNA Sept. 25. “San Antonio Police Department officers are currently investigating the incident and are searching for a suspect.”

“First and foremost, all of our seminarians and all the people at the seminary are safe,” Father Hy Nguyen, rector of Assumption Seminary, said Sept. 25. “We ask for your prayers for this misguided person, and for the safety of the Assumption community.”

An unidentified man who held a baseball bat was observed walking up to the dormitory building, Nguyen said. The man hit the glass doors several times. Though law enforcement was notified immediately, the suspect fled the area before police arrived, according to the Archdiocese of San Antonio’s statement.

Photos provided by the archdiocese appear to show damage to the feet of a statue of Jesus Christ crucified. A San Antonio Spurs NBA jersey was placed around the head of Jesus. The statue is adjacent to Our Lady’s Chapel, beside the discernment house.

In a Sept. 25 post on its Facebook page, the seminary said “since we do not yet know who the person is or their motives, please refrain from rushing to judgment but please pray for us and for the perpetrator.”

Archbishop Gustavo García-Siller of San Antonio reflected on the event.

“This disturbing event can lead us to know that Jesus on the Cross gave us His Body and Blood, His whole being, for our salvation,” he said Sept. 25. “It is a reminder that we are called to love one another as He loved us.”

“We pray for the person who committed this painful act; he is in our prayers,” the archbishop continued. “As with many other things that have been happening in this regard, may our hurt lead us to love even more, and even better. We assure our seminarians of our prayers and our support as we seek resolution to this.”

Clean-up of the vandalism began on Friday morning.

Assumption Seminary concentrates on formation of men for Hispanic ministry and church leadership. It has students from dioceses around the U.S. The San Antonio archdiocese serves about 800,000 Catholics in a regional population of over 2.6 million people, according to 2018 figures.

Recent months have seen numerous acts of vandalism and destruction at Catholic churches across the United States, including arsons and graffiti.

In July,a man crasheda minivan into a Florida Catholic church and then started a fire inside the building.

In Los Angeles, San Gabriel Mission church, founded by St. Junipero Serra,also burnedin a fire being investigated for arson. Numerousstatues of the sainthave been vandalized ordestroyed, most of themin California.

Several other churches across the country have been set aflame, and statues ofJesusorMaryhave beentoppledordecapitated.

While some attacks on statues have been committed by large groups with clear political affiliations, the perpetrators ofother actshavenot been identified.

The Sparkling Story of Dom Périgno...