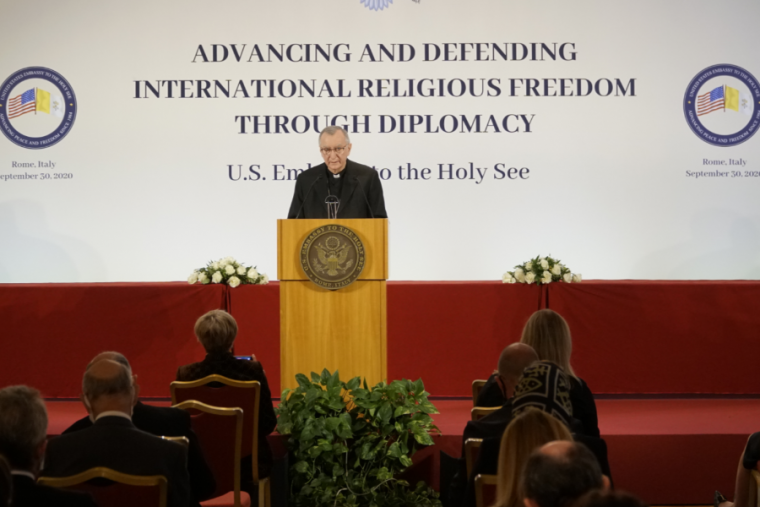 While the U.S. Secretary of State Mike Pompeo urged the Church to speak out about human rights abuses in China Wednesday, the Vatican’s top diplomats chose to focus their remarks at the same conference on an area of agreement with the current U.S. administration: the necessity ofprotecting freedom of conscience and religious voices in the public square.

Cardinal Pietro Parolin, the Vatican Secretary of State, said that “intolerant voices of the ‘politically correct’” can “silence and condemn those religious beliefs, traditions and practices that clash with their progressive ideology, labeling them as ‘hateful’ and ‘intolerant.’”

“It is time that we reflect more seriously about the root of ‘intolerance’ in such situations and, in particular, the shrinking public space for dialogue for and with those that practice their beliefs openly,” Parolin said in his closing remarksat the symposium organized by the U.S. Embassy to the Holy See in Rome Sept. 30.

“Indeed, the degree of respect for freedom of religion in the public sphere is a clear indicator of the health of any society; and, it follows, therefore, that it is also a ‘litmus test’ for the level of respect that exists for all other fundamental human rights as well,” the cardinal said.

Archbishop Paul Gallagher (pictured below), the Vatican Secretary for the Relations with States, echoed this sentiment in his remarks immediately followingPompeo’s speech.

“I think it is important to be aware of the fact that attacks against religious liberty are not only coming in the form of physical persecution, but ever more through ideological trends and ‘silencing,’through what has often been called ‘political correctness,’which are taking ever larger liberties in the name of ‘tolerance’ and ‘non-discrimination,’” Gallagher said.

“There are a growing number of examples of this phenomenon, including a number of states passing legislation aggressively attacking both the freedom of conscience and the freedom of religion. It is even present within the certain sectors of multilateral diplomacy,” he added.

Cardinal Parolin said that freedom of conscience was at “the heart of exercising the freedom to confess and practice a certain religion, or not to follow if one so chooses,” calling conscience “the inner sanctum of man’s transcendent nature” where “man discovers a law which he has not laid upon himself but which he must obey.”

“For man has in his heart a law inscribed by God … His conscience is man’s most secret core and his sanctuary. There he is alone with God whose voice echoes in his depths. The Church has always upheld the necessity to respect the internal forum of one’s conscience, not only because of its intrinsic link to the freedom of religion, but because it is the inner sanctum of the human person,” Parolin said.

He continued: “Sadly, we are witnessing a growing number of examples where this freedom is being violated, even forcefully so by civil legislation, which effectively amounts to an attack on the dignity of the human person.”

Parolin said that freedom of religion was in crisis because “our understanding of the truth of the human person and his anthropology is in crisis,” noting that this was not a new idea in the Church.

He said that Pope John Paul II’s 1993encyclicalVeritatis splendor“masterfully elaborated” this point and quoted multiple paragraphs from the text.

The cardinal added: “Although there are a number of current trends that undermine the proper perspective of human freedom, St. John Paul II highlights two prominent ones. The first we may call ‘radical subjectivism’or the exaltation of ‘individual freedom as an absolute.’”

“In our contemporary societies, particularly in the West, there is a strong tendency to exaggerate one’s personal freedom, to purposefully decouple it from the pursuit of the good, or worse, to make it the only good. As a result, man turns inward, becoming self-referential and, what is good, becomes wholly subjective.”

“From there, it is not long before man becomes an island, exercising his freedom, even apart from right reason. The ‘highest good’has now become the eradication of any obstacle to ‘radical autonomy,’ such as the natural moral or divine law. Even other fundamental human rights must be abolished so as to no longer impede the desire of one’s choosing.”

The other prominent trend highlighted by the Polish pope was “the denial of objective moral truth,” Parolin explained.

The concept of objective moral truth has now been replaced by “an individual’s personal sentiment or feeling about the moral good,” he said.

Addressing the conference room full of U.S. State Department officials, diplomats accredited to the Holy See, and journalists gathered to discuss diplomatic tools for promoting religious freedom, Parolin said: “Ultimately, the decision to root man’s freedom solely in the self, without any reference to the Creator, is unsustainable.”

“To stress exclusively the expression of freedom of religion as ‘freedom from external coercion’ without addressing what this freedom is properly ordered to, namely, the discovery of the ultimate truth of one’s existence, one’s origin and destiny, given by the Creator, is like giving a child a tool and telling them ‘you should not use this tool for such and such,’but never explaining to them ‘what purpose that tool was intended to serve,’” he said.

The cardinal then went on to quote the Baltimore Catechism: “If I am not mistaken, there is a famous series of catechetical booklets, produced from the one of the Councils of Baltimore in the United States. One of the initial questions of that faith primer is: ‘Why did God make you?’and the proper response to be given is ‘God made me to know Him, to love Him, and to serve Him in this world, and to be happy with Him forever in the next.’”

“The simplicity of this should not obfuscate the profundity of this truth. We are created for a purpose … Without this objective end, an end that exists beyond the self, we cannot hope but to find society in crisis, with each of us unable to embrace anyone but ourselves.” 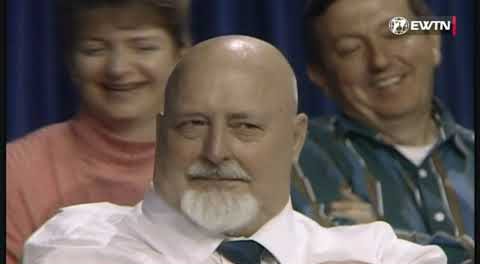 Mother Angelica Live Classics – What Are You Thankful For?

What connection does Moderna’s vaccine have to aborted fetal tissue?