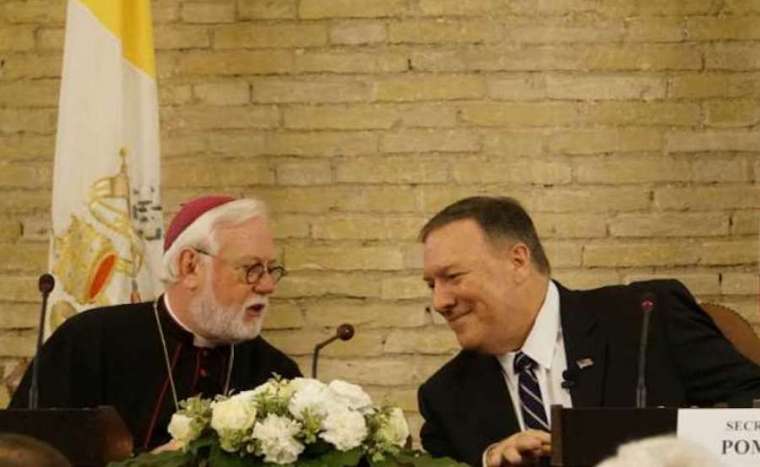 Ahead of a visit to the Vatican this week, U.S. Secretary of State Mike Pompeo said he plans to discuss human rights abuses in China, and urge Vatican officials to speak out about Chinese religious persecution.

“We’ve spoken pretty clearly about the human rights situation in China that has deteriorated under General Secretary Xi Jinping for religious believers throughout the country,” Pompeo told CNA in an exclusive interview Friday.

“The Church has an enormous amount of moral authority and we want to encourage them to use that moral authority, to improve the conditions for believers, certainly Catholic believers, but believers of all faiths inside of China, and so that’s the conversation that we’ll have,” the secretary added.

Pompeo will visit the Holy See this week during a trip that will also include meetings in Greece, Italy, and Turkey. While at the Vatican, Pompeo will meet with Cardinal Pietro Parolin, Secretary of State of the Holy See, along with Archbishop Paul Gallagher, who heads the Holy See’s office for relations with civil governments.

The secretary is not scheduled to meet with Pope Francis, with whom he met last October. While the pope does not always meet with foreign ministers visiting the Vatican, the Holy See has reportedly told U.S. diplomats that the pope did not want to meet with an American political figure so close to the November presidential election.

The meeting comes as the Holy See is expected to soon renew a deal it made two years ago with Beijing on leadership structures in the Church.

It also comes shortly after Pompeo publishedan essay Sept. 18 in First Things on the Vatican-China agreement.

In a tweet promoting the essay, Pompeo wrote that “The Vatican endangers its moral authority, should it renew the deal.” The remark made waves among diplomats for its pointed criticism of the Holy See’s policy.

But Pompeo stressed to CNA that he is committed to working with the Vatican, and he recognized its international importance on the subject of religious freedom.

The secretary said he believes the U.S. and the Holy See “have a shared interest in seeing that every human being in China has the opportunity to practice their faith, exercise their conscience rights.”

“Our administration has spent a lot of time and energy in promoting religious freedom all around the world, and I think the Catholic Church and the United States share the desire to create improved conditions for Catholics to exercise their faith tradition inside of China.”

The Vatican-China deal aimed to unify Catholics in China, who have been split between an “underground Church” loyal to Rome, and a nationally recognized organization, the Chinese Catholic Patriotic Association, in which bishops had previously been appointed and ordained without the permission of the pope, creating ade factoschism in the Church.

The deal, details of which have never been released publicly, was intended also to provide some legal protections for more than 9 million Catholics in China, at a time when Chinese President Xi Jinping has said that he aims to see China “actively guide the adaptation of religions to socialist society…supporting China’s religions’ persistence in the direction of sinicization.”

In practice, human rights observers say, that project has led to arrests of religious leaders, including Catholics, prohibitions on children attending Mass, and security cameras in churches, at the same time that the Uyghur Muslim people in China’s Xinjiang autonomous region have faced mass detention, forced labor, sterilization, and abortion in a campaign increasingly described as a genocide. Other religious and ethnic groups face similar conditions.

Pompeo told CNA that “we see enormous deterioration in the ability to attend Church…the things they’re doing to facilities for Christian believers, what’s happening in the west to the Muslim population in Xinjiang, we watch all this deteriorate and we urge the Vatican to exercise its capacity for moral witness and authority to support those believers.”

“That’s the conversation that I expect that I’ll have every time I encounter religious leaders around the world,” Pompeo said.

Critics of the Vatican-China deal say that it has caused Pope Francis to remain silent on human rights in China. That silence seems to have garnered little goodwill for Catholics living in China, some critics say, but it will compromise the Church’s ability to evangelize the country by making it appear complicit in the regime’s abuses.

Critics also note that while an agreement was apparently struck on the appointment of bishops in China, few bishops have actually been appointed to fill the numerous vacant dioceses in China, because Beijing has ground the appointment process to a halt by stalling.

Defenders of the deal, however, say that conditions for Catholics might be far worse in the country were it not for the Holy See’s willingness to engage with Beijing, and that even if few bishops are being appointed, putting a stop to the appointment of schismatic bishops is the beginning of reform.

Cardinal Parolin declined to respond to questions from CNA regarding Pompeo’s visit. An aide to the cardinal told CNA that Parolin expects to discuss issues related to the China deal with Pompeo.

Earlier this month,Parolin told journaliststhat the Holy See’s “current interest is to normalize the life of the Church as much as possible, to ensure that the Church can live a normal life, which for the Catholic Church is also to have relations with the Holy See and with the pope.”

Pompeo told CNA he understood the Church faces risks in China no matter how it engages with Beijing.

“The Holy See will have to balance those risks and I appreciate that, and I don’t know precisely what the arrangements are that have been agreed to.”

“But I can tell you that as you stare at the facts on the ground, conditions have worsened. The capacity for believers to exercise their faith has decreased. It has gone backwards,” he said.

“And so while it is the case that dialogue matters an awful lot, that these conversations are incredibly important and complex, the agreements that are entered into have to actually deliver outcomes that reflect a better situation. This is the kind of thing that we deal with all the time, where we certainly have imperfect solutions, but we never cease our call for what it is that we ultimately know is the right thing to do.”

“The United States is urging countries all across the world to have their eyes wide open with respect to what’s taking place [in China], whether that’s in the freedom that’s being denied in Hong Kong, or what’s taking place now against those who want to practice their faith in Tibet, in Inner Mongolia…We’re watching the deterioration of religious freedom, and each of us has a special responsibility [to address it],” he said.

“I am confident that the Holy See has a truly special and unique capacity to make life better for each of these people who simply want to exercise their most basic human right of exercising their ability to practice their faith,” the secretary said.

Cardinal Joseph Zen, emeritus bishop of Hong Kong, has been an outspoken critic of the China deal.Zen told CNA this monththat “resounding silence will damage the work of evangelization.”

“Tomorrow when people will gather to plan the new China, the Catholic Church may not be welcome.”

Pompeo told CNA that he believes more voices, including those from Rome, should be speaking. “The world, and that certainly includes the Vatican, has a responsibility to speak to that truth, to speak to the reality that’s taking place,” he said.

The secretary added that in his view, the United States and other nations have been making efforts to make change in the region.

Speaking of the United States, Pompeo said that “we have imposed costs on some of those who have been the most egregious violators, we have urged American businesses to ensure, for example, in Xinjiang, that they’re not doing business with those involved in the horrific human rights violations that are taking place there. So we’ve taken a number of actions to prevent these kinds of violations of the most fundamental human rights from taking place.”

Mentioning a forthcoming meeting with officials from Australia, Japan, and India, Pompeo said that his goal is “building out a coalition for freedom-loving peoples all across the world….to continue to defend these most basic rights.”

“We’ve talked to nations in the Pacific – Pacific island countries – who did something the Chinese didn’t like and they stopped sending tourists to their countries. It has a significant impact on their economy. Normal nations don’t do that. They don’t use a brand of punishment diplomacy that impacts the lives of real people.”

Speaking of Taiwan, where the Trump administration has made new diplomatic initiatives by sending both a senior-level diplomat and HHS Secretary Alex Azar in recent months, Pompeo said the island, which considers itself to be sovereign while Beijing regards it as a renegade province, “is certainly part of our effort,” but said “the challenge is so much greater than just any one single theatre, one single tactical space.”

“The challenge and the fight is not between the United States and China. This is a fight between authoritarianism, barbarism, and the rule of law and decency and the protection of fundamental human rights and freedoms. That is the challenge that is presented by the Chinese Communist Party, and it’s the one that President Trump has worked so diligently to build out against, to make sure at least for the American people, we’re going to get this right. We’re urging other nations to join us in this challenge.”

“Regimes that engage in authoritarian, totalitarian behavior,” the secretary said, “survive by darkness and obfuscation. And by the moral authorities of the world, those who value the most fundamental freedoms for every human being…that draw attention to those [regimes] ultimately create better lives for people,” Pompeo added.

Parties divided over nomination of...