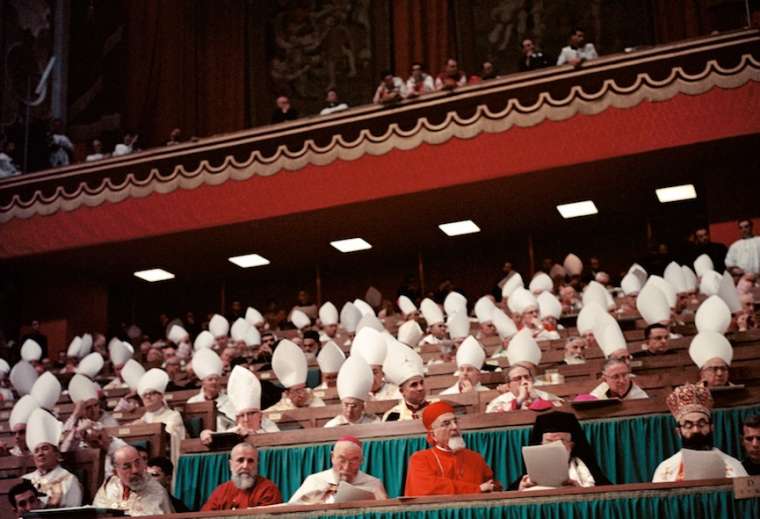 Amid recent controversy over Vatican II, a theologian said that ecumenical councils have a history of provoking conflict, but their expression and explanation of the Catholic faith is protected by the Holy Spirit.

Cavadini was appointed in 2009 by Pope Benedict XVI to serve on the Church’s International Theological Commission, and specializes in the intellectual history of Christianity.

The theologian said Church documents sometimes need clarification, but saying so is not the same as claiming, as some recent critics have, that an ecumenical council might teach or contain errors about the Catholic faith.

Vatican II has been the subject of disagreement since it began.

The council was convened to articulate teachings of the Catholic faith in a matter that might be understood in modernity, to grapple with the Church’s relationship to the secular world, and to address some theological and pastoral questions that had arisen in the decades before it.

Since the conclusion of the Second Vatican Council, it has become a decades-long theological project of the Church’s bishops to interpret and understand the fullness of its vision, in a manner consistent with the doctrinal teachings of the Church. That project has led to numerous theological and pastoral initiatives, and also to division.

Some Catholics, including some bishops who attended the Council, felt that attempts to “modernize” the Church’s language or catechesis could lead to equivocation on important issues, or a less precise and direct expression of Catholic doctrine and worship.

Some critics of Vatican II have said that documents produced by the council contain errors, others say they need clarification, while many others have criticized the application of the council in the decades following it, while defending the documents themselves. In some cases, those debates have led to official ruptures in the Church.

In recent months debate over the council itself has become more public, and more acute.

In a June interview, and in other recent letters, Archbishop Carlo Viganò, a former papal representative to the United States,offered a set of criticisms against the Second Vatican Councilthat attracted considerable attention among some scholars and Catholics, especially because of their source: a former high-ranking Vatican official who had been appointed to positions by Pope St. John Paul and Pope Benedict XVI, both supporters of the Second Vatican Council.

Viganò claimed that at the Second Vatican Council, “hostile forces” caused “the abdication of the Catholic Church” through a “sensational deception.”

“The errors of the post-conciliar period were containedin nucein the Conciliar Acts,” the archbishop added, accusing the council, and not just its aftermath, of overt error.

Viganò has suggested that the Second Vatican Council catalyzed a massive, but unseen, schism in the Church, ushering in a false Church alongside the true Church.

Last month, some Catholics, including priests, media personalities, and some scholars, signed a letter praising Vigano’s engagement on the topic, and claiming that “Whether or not Vatican II can be reconciled with Tradition is the question to be debated, not a posited premise blindly to be followed even if it turns out to be contrary to reason. The continuity of Vatican II with Tradition is a hypothesis to be tested and debated, not an incontrovertible fact.”

In response to Viganò,Cavadini wrote in Julythat he sympathizes with Catholic frustrations “regarding the evident confusion in the Church today, the attenuation of Eucharistic faith, the banality of much of what claims to be the Council’s inheritance liturgically, etc.”

“Yet, is it fair to blame the Council, rejecting it as riddled with error? But would this not mean the Holy Spirit allowed the Church to lapse into prodigious error and further allowed five Popes to teach it enthusiastically for over 50 years?” Cavadini asked.

“Further, did the Second Vatican Council really produce no good worth mentioning? Viganò mentions none. True, its liturgical reforms were commandeered by banality in the United States. For example, there is the introduction of hymns with no aesthetic merit but containing doctrinal errors especially regarding the Eucharist, hymns that de-catechized the very Catholics who faithfully attend Sunday Mass,” he wrote, while noting that he had experienced beautiful liturgies in African nations that were the fruit of the Second Vatican Council.

Speaking of one such Mass in Nigeria, Cavadini wrote, that “when, after Communion, the whole assembly recited in unison three times, ‘O Sacrament Most Holy, O Sacrament Divine, all praise and all thanksgiving be every moment Thine,’ it seemed that the Holy Spirit was making the deepest possible appeal to our hearts, reaching into our souls, helping us to ‘pray as we ought.’”

The theologian also praised the universal call to holiness contained inLumen gentium, Vatican II’s document on the Church. The council emphasized that sanctity, or closeness to God, is not only the domain of priests and religious, but of all people.

“It is something which seemed so sublime to me when I first read it at age 19 that the desire to live up to it has never worn off even now,” he wrote.

“Is Vatican II a bad seed? Or, is the seed in question rather the lopsided choice of theologians to develop one strand of conciliar teaching at the expense of others? Not to mention pastors who have so prioritized the true good of making Christian teaching accessible and intelligible to modern people that they downplay its uniqueness as embarrassingly outmoded?” he asked.

In comments to CNA, Cavadini emphasized that other councils have been misinterpreted and controversial. His essay noted that after some councils, like the Council of Chalcedon, controversies continued for centuries.

“That a statement would need further interpretation is not a unique feature of this council,” Cavadini said.

The theologian raised an example from the Council of Nicea, which took place in the summer of 325. The council, in a discussion about the Trinity, declared that the Son is consubstantial, orhomoousios, with the Father.

“There was a widespread reaction against the word,” Cavadini told CNA, by bishops and theologians who equated itwith the third-century heresy of Sabellianism, which had been condemned by the Church’s magisterium.

“It was only when the use of the wordhupostasisorpersonawas clarified and distinguished fromousiaor ‘substance’ that the ambiguity was clarified. But — to emphasize — this was not an error in the teaching itself, far from it! Yet the very act of making a statement sets up a new situation, which often does require further interpretation.”

When Nicea used the wordhomoousios, “it was taking up a tainted word,” the theologian said.

“Wouldn’t our critics of Vatican II have cried foul? And error? They just don’t remember that even this most famous of councils was bold enough to risk using a tainted word in a new sense with new intent.”

He added that amid efforts to interpret a document, official clarification of unclear language is sometimes important.

On matters of faith “an ecumencial council is preserved from error” he added, “but this does not mean that everything was expressed as well as it could have been or could be, for the Holy Spirit doesn’t guarantee that, but simply that the Church, in her authoritative teaching, is preserved from outright statements of error.”

Cavadini urged that Catholics, and especially Church leaders, read seriously the documents of Vatican II, and work to incorporate them in their understanding of the Church.

The recent controversy, he wrote, and Viganò’s letter, have “at least had the virtue of forcing me to emerge from complacency in accepting half-measures in the reception of the Council. Perhaps others will find themselves with me in the same boat as well.”

Reparation for the Frightful Wound...