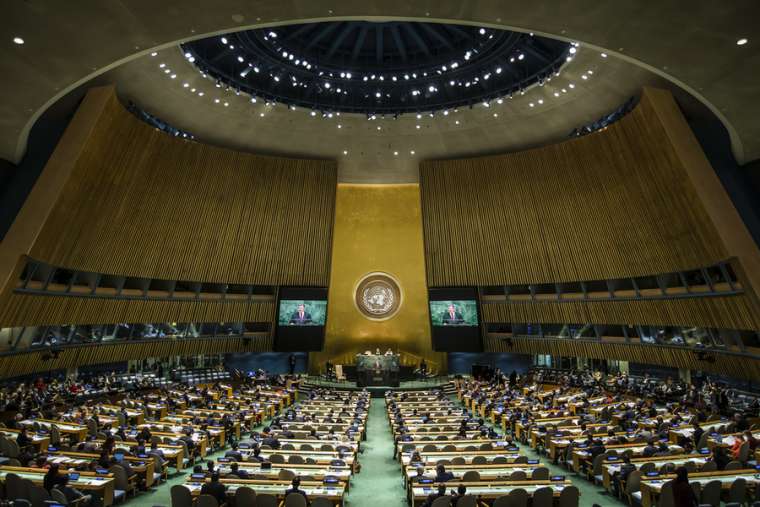 A Vatican representative has said that the inclusion of a reference to “reproductive rights” in a United Nations resolution on combating the coronavirus is “deeply concerning and divisive.”

Archbishop Gabriele Caccia made the remark Sept. 11 after the UN General Assembly in New York endorsed theresolution, entitled “Comprehensive and coordinated response to the COVID-19 pandemic.”

The resolution appealed to states “to take all measures necessary to ensure the right of women and girls to the enjoyment of the highest attainable standard of health, including sexual and reproductive health, and reproductive rights.”

He continued: “In line with its reservations expressed at the international conferences held in Beijing and Cairo, the Holy See reiterates that it considers the phrase ‘reproductive health’ and related terms as applying to a holistic concept of health, which embraces the person in the entirety of his or her personality, mind and body.”

“In particular, the Holy See rejects the interpretation that considers abortion or access to abortion, sex-selective abortion, abortion of fetuses diagnosed with health challenges, maternal surrogacy, and sterilization as dimensions of ‘reproductive health,’ or as part of universal health
coverage.”

The archbishop’s criticisms were echoed by a representative of the United States, which voted against the resolution.

The U.S. Mission to the United NationssaidSept. 11 that it objected to the resolution’s inclusion of“reproductive rights.”

“The United States believes in legal protections for the unborn, and rejects any interpretation of international human rights to require any State Party to provide safe, legal, and effective access to abortion.”

The U.S. also voted against the resolution because it endorsed the World Health Organization’s “key leadership role” in fightingthe virus.

The Vatican’s permanent observer offered several other criticisms of the resolution, which was adopted by 169 votes in favor, two against (the U.S. and Israel) and two abstentions (Hungary and Ukraine.)

Caccia said: “Because the international community needs to stand together in the face of the pandemic, the Holy See supported the idea of this ‘omnibus resolution’ from the beginning and during the negotiations emphasized the need for a common and consensus-based approach.”

“It is unfortunate that this omnibus resolution, launched as a means of showing the world that the General Assembly stands as one and of bringing together many COVID-related initiatives, is adopted lacking consensus.”

He endorsed resolution’s appeal for “extensive immunization” to fight COVID-19, but underlined the importance of vaccines that are “free from ethical concerns” and available to all.

He regretted “the exclusion of faith-based organizations from the list of those who play an important role in response to the pandemic.”

While he welcomed the text’s references to human rights issues, he said they were “hampered by a lack of precision in terminology and in its grounding in international human rights law.”

He also suggested that references to the elderly, who were especially vulnerable to the virus, were inadequate.

“This concern should have been buttressed by stressing that healthcare decisions affecting older persons should always respect their right to life and never be interpreted otherwise,” he said.

Caccia called for “stronger language” related to reform of the international financial system, underlining the need for the “reduction, if not cancellation, of the debt burdening the poorest nations.”

Finally, he welcomed the inclusion of “comprehensive language about climate change” in the resolution.

“The pandemic should not reduce our attention on the climate crisis, which continues to be one of the most serious global emergencies,” he said.