Vatican upholds bishop over reception of Communion on tongue 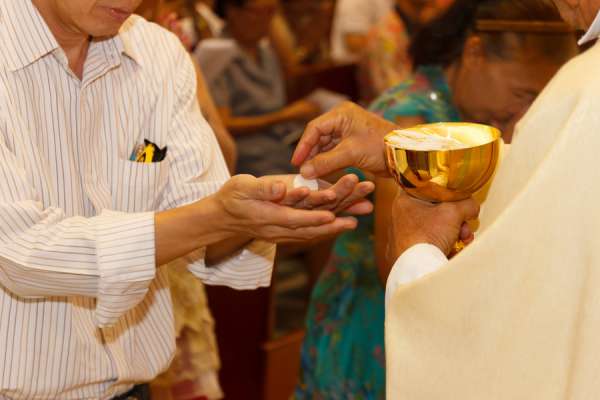 Vatican upholds bishop over reception of Communion on tongue

CNA Staff, Dec 11, 2020 / 03:19 pm (CNA).- The secretary of the Congregation for Divine Worship wrote to a petitioner last month rejecting their appeal against the Bishop of Knoxville’s decision to ban temporarily reception of Communion on the tongue because of the coronavirus pandemic.

The congregation “received and attentively studied [the] petition making recourse against the decision of Bishop Richard F. Stika to suspend reception of Holy Communion on the tongue at public Masses throughout the Diocese of Knoxville for the duration of the public health emergency caused by the coronavirus pandemic,” Archbishop Arthur Roche wrote Nov. 13 to the petitioner, whose name has been redacted from the publicly available copy of the letter.

Archbishop Roche, Secretary of the Congregation for Divine Worship and the Discipline of the Sacraments, cited a letter sent in August by the congregation’s prefect, Robert Cardinal Sarah, in which the cardinal wrote: “in times of difficulty (e.g. wars, pandemics), Bishops and Episcopal Conferences can give provisional norms which must be obeyed … These measures given by the Bishops and Episcopal Conferences expire when the situation returns to normal.”

Roche interpreted this letter as saying the provisional norms can be “even clearly, as in this case, to suspend for whatever time might be required, reception of Holy Communion on the tongue at the public celebration of the Holy Mass.”

“This Dicastery does hereby therefore act to confirm the decision of Bishop Stika and thereby rejects your petition seeking its modification,” Archbishop Roche wrote. The rejection of the petition suggests a change in policy or rationale by the congregation.

In July 2009, during the swine flu pandemic, the congregation responded to a similar inquiry regarding the right to receive Communion on the tongue, recalling that the 2004 instruction Redemptionis sacramentum “clearly stipulates” that each of the faithful always has the right to receive on the tongue, and that it is illicit to deny Communion to any of the faithful who are not impeded by law.

The 2004 instruction, issued on certain matters to be observed or to be avoided regarding the Most Holy Eucharist, noted that “each of the faithful always has the right to receive Holy Communion on the tongue, at his choice.”

Bishop Stika lifted the restriction on reception of Communion on the tongue in late November. He had imposed it when he permitted the resumption of public Masses in the diocese at the end of May.

“The decision to suspend the distribution of Holy Communion on the tongue was difficult for me and I understand the concern some of our clergy and laity had regarding my actions,” Bishop Stika said Dec. 11. “However, we were in the early stages of this pandemic and dealing with much uncertainty. I felt I had the authority to make a conscientious decision for the safety of everyone—the laity and our clergy. “

In March, the Archdiocese of Portland in Oregon concluded that the risk of transmitting infection when receiving on the tongue or hand is “more or less equal.”

Similarly, the Diocese of Springfield in Illinois said earlier this year that “Given the Church’s existing guidance on this point (see Redemptionis Sacramentum, no. 92), and recognizing the differing judgments and sensibilities of the experts involved, we believe that, with the additional precautions listed here, it is possible to distribute on the tongue without unreasonable risk.”

Why Are So Many Girls Rejecting Wo...