Virgin of Guapulo depicted in 2020 Christmas stamp from USPS 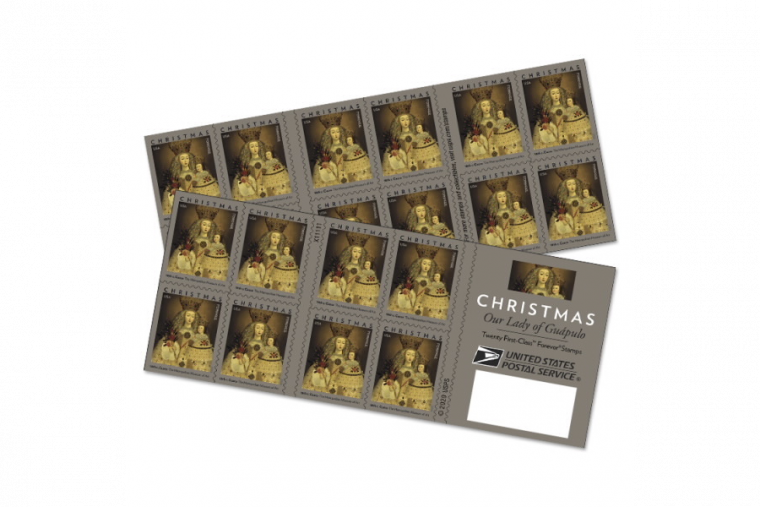 Virgin of Guapulo depicted in 2020 Christmas stamp from USPS

The U.S. Postal Service (USPS) has announced the release of a Christmas stamp depicting an 18th-century Peruvian painting of the Blessed Mother and the Child Jesus.

Designed by Greg Breeding, the stamp is based on a painting of Our Lady of Guapulo currently located at the Metropolitan Museum of Art in New York City.

The image, painted by an unknown artist in Cuzco, Peru, depicts a carving which Ecuadorian merchants commissioned in 1584 as a Spanish copy of the Virgin of Guadalupe. The statue was originally carved by sculptor Diego de Robles, but it was later destroyed in a fire in 1936, La Hora reported.

“Enrobed in a pyramidal gown speckled with jewels and holding a scepter woven with roses and leaves, a crowned Virgin Mary looks down at a similarly adorned Christ Child in her left arm. A red rosary ropes across the center of her dress and down to her right,” the USPS wrote in its description of the stamp.

The image in the stamp is framed by a gray metallic border, and the word “Christmas” is written in black lettering above the image.

According to the Metropolitan Museum of Art, a copy of the sculpture was carried throughout the Andes during the 17th century to raise funds to build a new sanctuary. This pilgrimage resulted in a greater demand for local replicas, like the painting from Cuzco.

The image is named after the Church of Our Lady of Guápulo – the first Marian sanctuary in Ecuador. The church has attracted numerous devotees seeking the Blessed Mother’s aid and protection.

The new stamps will be released Oct. 20 at post offices nationwide. They are being issued as “forever stamps,” which means they can be purchased at the current first-class mail rate and can be used even if that rate rises later. The stamps will cost $0.55 each at the time of their release.

A Christmas stamp depicting a traditional image of Jesus and Mary is released every two years. For the 2020 holiday season, USPS will also release 16 other holiday season-themed stamps, including ones for Hanukkah and Kwanzaa.

Vatican to turn building offered b...

Mother Cabrini gets a new statue i...