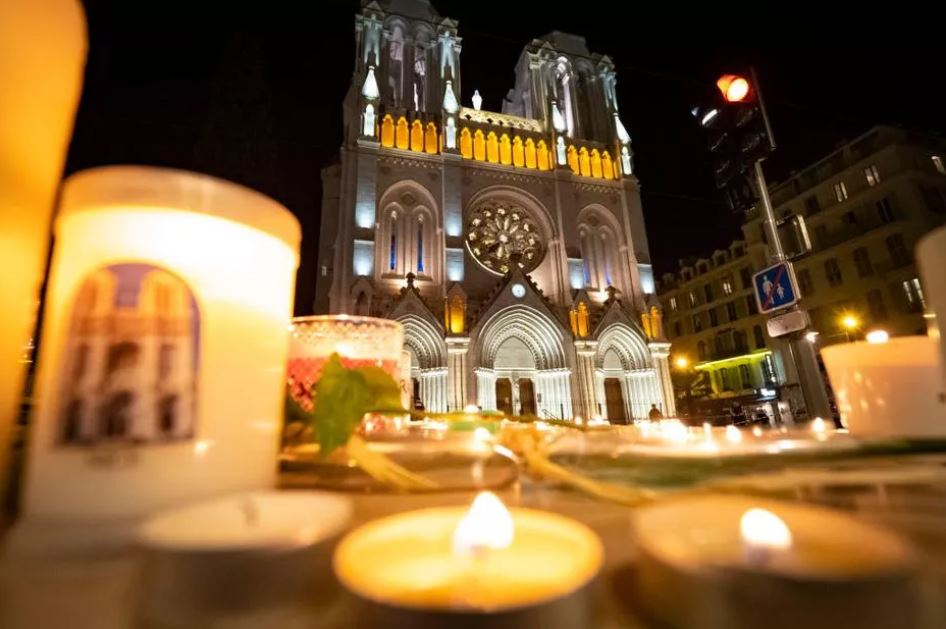 Despite the vehement attempts of the French authorities to deny the Catholic roots of their country, jihadists keep seeing Christianity as the core of the nation.

“Please tell my children that I love them.” These are the last words that a 44-year-old Brazilian mother who was a victim of today’s terrorist attack inside the Basilica of Notre-Dame de Nice in southeastern France said to passersby surrounding her, before drawing her last breath.

The woman, as well as the church’s sacristan, a 54-year-old father of two, and a 60-year-old woman, were savagely killed in the early morning of Thursday, Oct. 29, right after the church opened its doors.

According to the initial information provided by the French authorities, two of the three victims were slaughtered by the assailant, an undocumented 21-year-old Tunisian who recently arrived on the French soil via Lampedusa Island in Italy, while the Brazilian citizen died of multiple stab wounds.

At the same time, a security guard of the French consulate in Jeddah, Saudi Arabia, was stabbed.

Later in the early afternoon, a man was arrested on the outskirts of the Church of St. Martin in Sartrouville, located in the north-western suburbs of Paris. He was reportedly seeking to imitate the Nice attack. As well, a man brandishing a 12-inch knife was arrested in the streets of Lyon in southeastern France.

This appalling series of attacks has occurred on the day of Mawlid, a Muslim feast commemorating the birth of their Prophet Muhammad, within a context of rising tensions between France and Muslims after the satirical newspaper Charlie Hebdo republished the cartoons of Muhammad that earned its editorial staff the bloody attack of 2015.

On Oct. 16, 2020, the beheading of French teacher Samuel Paty for having shown the cartoons to his students in a class on freedom of speech, in a suburb of Paris, had already plunged the French nation into deep disarray.

Four years after the slaying of Father Jacques Hamel in his church in Normandy, the Catholic faithful are once again being struck by Islamist terror. In response to the appeal of the Bishops’ Conference of France, the bells of churches across France tolled in tribute to the three victims of Nice at 3pm, the Hour of Divine Mercy, which marks the time when Christ died on the cross.

In the same communiqué, while noting that the three victims were killed because they were inside the basilica and “represented a symbol to be destroyed,” the French bishops called on their Catholic flocks to “face this treacherous and blind threat” despite the pain.

The victims killed in today’s attack bring to 263 the total number of people killed by Islamic terrorists on French soil since January 2015. The city of Nice was already the scene of a horrific bloody attack in 2016, which resulted in the death of 86 people.

Failure of a Social Model

Despite attempts of the secularized French Republic to deny the Catholic roots of the country, the various jihadists, for their part, persist in seeing Christianity as the core of the nation as well as that of the whole of Western civilization. Islamic militants have once again fueled that perception by targeting Catholic faithful.

Paradoxically, the deleterious situation caused by the rise of radical Islam in France is partly due to the lack of a strong religious identity in the country, according to Father Stéphane Drillon, a priest of the diocese of Nice and a YouTuber known as Le Curé enragé (“The enraged parish priest”).

“History has shown that it is easier for Christians to live peacefully with their Muslim neighbors when they are a majority and have a strong and firm faith but when Christians are in a position of inferiority, the conquering spirit dictated by the Quran tends to come back,” he said in an interview with the Register.

While denouncing the failure of the political authorities to address the growing Islamism in France, Father Drillon also blamed the incapacity of contemporary Western societies to propose a credible model likely to make young Muslims willing to assimilate with the country they live in. In this sense, he said the eradication of God from every sphere of society, combined with burgeoning relativism, necessarily creates a vacuum in people’s mind, which has a natural and intrinsic religious aspiration.

“What do French secularism and nihilism have to propose to a young Muslim today, apart from abortion, the Pill, drugs, castrating feminism, games, hobbies and a lockdown where people are paid for not working?” he said. “There is nothing here that makes a young Muslim willing to become part of a national narrative or to respect the country that welcomes them, and the choice to take refuge in the religion of their ancestors and homelands in a most radical manner is one of the few options they have.”

Duty to Keep Going to Mass

In the face of the growing religious, ethnic and political violence in the whole territory of France, where the announcement of a new COVID-19 lockdown and the threat of the ban on Mass is plunging many into increasing uncertainty and concern, the Catholic faithful must show themselves to be individually and collectively strong, Father Drillon added.

As the enemy’s goal is to terrorize the French citizens in order to cut them off from their God, their identity and their customs, the priority must be, in his view, to restore the confidence of Christians by reinvigorating their hope, enthusiasm, and joy in being followers of Christ. The glorious examples of the saints and martyrs of the Church are here to help them not to be afraid.

“It is not by closing our churches or by curling up in rectories that we will avoid beheadings: On the contrary, the first thing the Catholics should do is to massively rush to Mass tomorrow morning and unite with Christ,” Father Drillon said. “It is a duty, especially at a time when the French authorities could decide to forbid it in the whole country.”

Mass of Thanksgiving on the Feast...