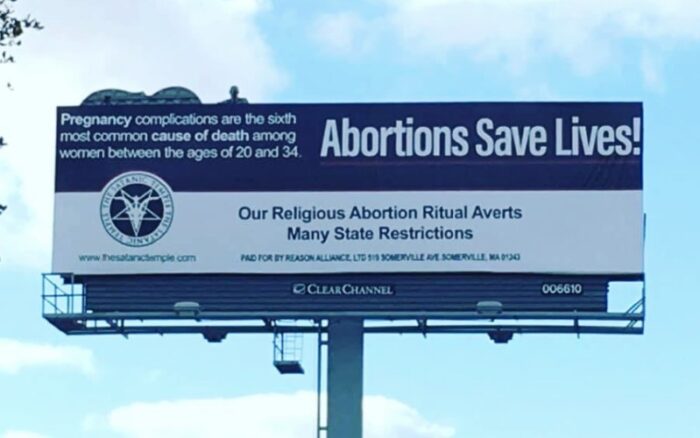 This is so evil!

Choice42 founder and Canadian pro-life advocate Laura Klassen posted a photo of the Satanic Temple’s billboard campaign. The group purchased at least three billboards in the United States advocating for abortion rights as a religious ritual.

The billboards are in Dallas, Houston, and Miami.

“Pregnancy complications are the sixth most common cause of death among women between the ages of 20 and 34,” the billboard states. “Our religious abortion ritual averts many state restrictions.”

Here’s a photo of the billboard below:

Klassen’s post reads, “Wow. So [The Satanic Temple] is actually promoting their ‘religious ritual’ now. Doesn’t that speak volumes about what abortion is?”

According to the Dallas Observer, Satanic Temple spokesperson Sydney Goodwin said their abortion ritual “provides spiritual comfort and feelings of self-worth during what some consider to be a difficult time.”

“It’s a process to provide spiritual sustenance in a satanic way,” Goodwin said.

Satanism is a form of idolatry.

“All forms of divination are to be rejected: recourse to Satan or demons, conjuring up the dead or other practices falsely supposed to “unveil” the future. Consulting horoscopes, astrology, palm reading, interpretation of omens and lots, the phenomena of clairvoyance, and recourse to mediums all conceal a desire for power over time, history, and, in the last analysis, other human beings, as well as a wish to conciliate hidden powers. They contradict the honor, respect, and loving fear that we owe to God alone.” (Catechism of the Catholic Church, 2116)

Jesus, please have mercy on us!

2020 Year in Review in Pictures