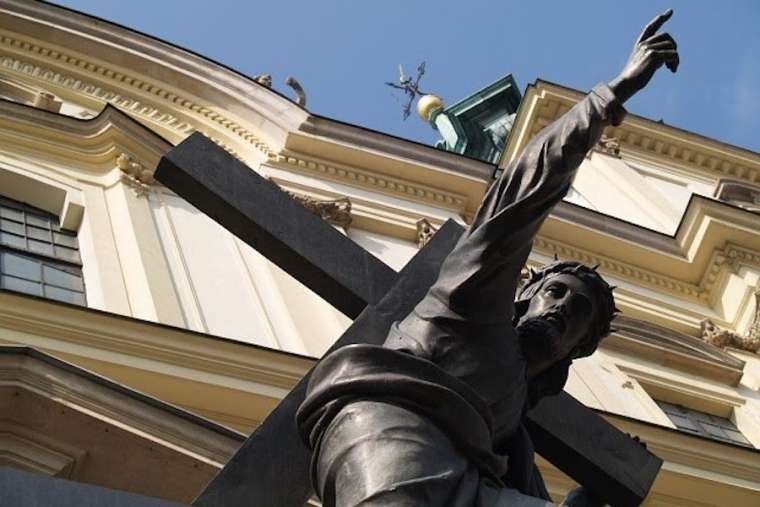 A Polish cardinal has urged protesters to respect religious sensibilities after they attached a rainbow flag to a historic statue of Christ in the capital, Warsaw.

In astatementpublished on the Polish bishops’ conference website July 29, Cardinal Kazimierz Nycz deplored the protesters’ decision to target the statue outside Holy Cross Church on Krakowskie Przedmie?cie, one of the city’s best-known streets.

The statue, which depicts Christ carrying the cross and pointing to the sky, sits on a plinth inscribed with the words “Sursum corda” (Lift up your hearts) — a message that has encouraged Poles during some of the darkest times in their history.

Placed outside the church in 1858, it remained standing during the Warsaw Uprising in 1944. The Nazis, who destroyed up to 90% of the city’s buildings in response to the Uprising, eventually toppled the statue.

A photograph from the timeshows the broken statue lying amid rubble with its finger pointed to the “Sursum Corda” inscription above, which was seen as a sign of God’s providence amid the Nazi occupation.

Nycz, the Metropolitan Archbishop of Warsaw, said: “The desecration of the historic statue of Christ ‘Sursum corda’ at Krakowskie Przedmie?cie in Warsaw caused pain to believers, parishioners of the Holy Cross Church and many residents of the capital, for whom the statue of the Savior carrying the cross became a symbol of hope in the most difficult days of the Uprising.”

“I appeal for respect for the religious feelings of believers regardless of their views. Let us stop using acts of vandalism and crossing borders in public debate.”

Poland’s Prime Minister Mateusz Morawiecki was pictured praying at the foot of the statue on July 29. In a statement on his Twitter account, he wrote: “There is no consent to profaning national and religious symbols in the name of any ideology. The values they symbolize, important to millions of Poles, are a heritage that is subject to special protection. You cannot become an aggressor under the guise of supposed equality.”