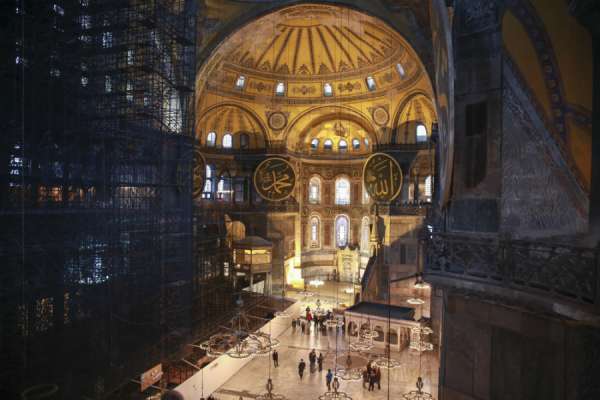 The report examined challenges facing Christians between 2016 and 2020, finding that Christians in Turkey frequently experience suppression of their legal status as citizens, as well as the legal status of their religious sites and institutions. Furthermore, rather than being granted full rights because they are Turkish citizens, their religious and civil rights are exploited as international political “bargaining chips.”

“The institutionalized use of religious freedom as a political bargaining chip should prompt caution amongst human rights advocates,” the report states.

“Another point of caution is the cultural perception within Turkey of how these issues are discussed within the international community,” the report adds.

Christians are a small minority in the country of Turkey. They account for roughly 160,000 citizens, or roughly 0.2% of the total population. A strong majority of the country’s population – roughly 90% – is Muslim. According to the report, the prevalent “competing narratives” of Islam and Kemalism (a kind of Turkish nationalist secularism) in the country push Christians and their institutions and history to the margins.

“Unless this framework is reformed, religious freedom abuses will perpetuate regardless of political leadership,” the report states. “These problems have become more visible following the 2016 coup attempt against President Recep Tayyip Erdoğan, who responded by accelerating the implementation of an Islamic-nationalist agenda. This agenda appealed to both the religious and the Turkish nationalist sections of society, but increasingly isolated more moderate and democratic voices.” The report identified several key areas in which Christians experience repression or abuse of their religious freedom, including through a strong emphasis on the Turkish identity being an Islamic identity, through the suppression of the legal status of Christian citizens and their institutions, the neglecting of the place of Christians in the country’s heritage and even the telling of a revised history, the intimidation of acts of cultural or ethnic expression of Christians, and the abuse of Christians for international and domestic political bargaining power, among others. In one example of the use of Christians for political bargaining power, the report notes that several international political leaders have called for the reopening of Halki Seminary in Istanbul. The seminary was founded in the 1800s by the Greek Orthodox Holy Trinity Monastery, but closed in 1971 when the law prohibited privately owned houses of religious education. For the past 10 years, Erdoğan has said he will reopen the seminary once certain concessions are made for the ethnic Turks in Thrace, Greece. In that time, Greece has opened multiple mosques and increased benefits for ethnic Turks, and yet Halki Seminary has yet to be reopened. The fair treatment of ethnic Turks in Greece is a “laudable” goal, the report notes, but when it is tied to the conditional fair treatment of Christian citizens of Turkey, it is exploitation and a failure on the president’s part to “uphold the religious liberty of Turkish citizens.” Another act of disregard for Christians in Turkey came this year, the report noted, when the Hagia Sophia, a one-time cathedral that had been functioning as a UNESCO-recognized museum and symbol of peaceful coexistence, was converted into a mosque in July.

“Throughout this series of events, many asked Turkey to respect the country’s pluralistic heritage by protecting the secular nature of Hagia Sophia,” the report noted. “Concerns were raised about how changing the museum status of Hagia Sophia could impact its designation as an UNESCO World Heritage site. The calls were ignored.”

Other important Christian sites in the country have been vandalized, or neglected and then demolished. In the education system in Turkey, students are taught to perceive anything that is not Islamic as being anti-Turkish and a threat. Violent aggression against these perceived threats is not punished, and in some cases is celebrated, the report noted. “A pastor living in southern Turkey shared about his daughter’s experience: ‘My daughter was in a social studies class. (The instructor) was teaching that what the crusades couldn’t do, the missionaries are now trying to do. ‘They’re working on getting our land,’ she said. So then, there were three middle school students who during the break beat my daughter to the point of being unconscious and needing to be taken to the hospital. For the next year and a half, my daughter had weekly fainting spells.’” In another example of religious freedom violations included in the report, a small Protestant church serving Christian refugees from Iraq and Syria was raided and closed by Turkish police for not having a proper registration, even though the church’s leader had attempted to register the space as a church with the government and was told that there was no legal framework in which to do so. Furthermore, the report notes, people who are part of initiatives to preserve the history of Christian genocide in Turkey are charged, imprisoned, and otherwise silenced by the government for anti-government crimes.

“From 1914 to 1923, the Christian population of modern Turkey decreased from 20-25% to less than 2%. Millions of native Armenian, Greek, and Assyrian Christians were forcibly deported, massacred or displaced during the First World War (1914-1918) and the Turkish War of Independence (1919-1923),” the report states.
“Civil activists who promote the protection of cultural heritage, encourage dialogue about the genocide, and promote diversity in Turkish society, are targeted by ultra-nationalist elements within the Turkish state and society,” the report notes.

The Turkish government specifically targets Protestants, the report noted, because it is more familiar and therefore more comfortable with the Catholic and Orthodox Churches. It views Protestantism – particularly missionaries from other countries – as a threat, and pastors or missionaries face forced expulsion from the country.

“The upheaval of deportation involves the trauma of enforced separation from family, friends and loved ones. The injustice and lack of any clear explanation for the termination of residency and issuance of the N-82 code is confusing,” the report noted. The code dictates that foreigners must seek permission prior to entering the country, which “is almost never given in practice”, and foreigners must therefore go to court to seek this permission. Effectively, the report said, the code is used to ban Protestant missionaries from the country. “Meanwhile, the financial burden of legal costs and the frustration of pursuing the case through the courts adds another layer of exhaustion. For every individual and family, the issuance of the N-82 code has been a painful experience.” Furthermore, the presence of Turkey’s military in Iraq, Syria, and other countries in the Middle East and northern Africa has come with frequently reported “human rights abuses against ethnic and religious communities committed by Turkish soldiers and mercenaries employed by Turkey, some of whom previously fought with extremist groups engaging in different regional conflicts,” the report notes. In October, Christian human rights leaders called on the Trump administration to issue sanctions on Turkey in response to its actions in the 2020 Nagorno-Karabakh War, and warned that Turkish actions were guided by “animus” against Christians.

“Turkey has an obligation under national and international law to uphold Freedom of Religion or Belief (FoRB). The authorities must provide a legal framework to accommodate its religious minorities and develop a national narrative that promotes social cohesion,” the report stated. “Given the new executive powers of Turkey’s president, the position holds the necessary authority to make needed changes to the legal framework which protects religious minorities. This obligation for religious freedom extends to those territories under Turkish military control.” The report included multiple questions at the end of each section to prompt a “transparent dialogue” about religious freedom and the situation of Christians in Turkey. It called on the Turkish government as well as the international community to uphold the full rights of Christians in the country.

“Through this report, it is our earnest desire to encourage an open dialogue between the international community and Turkey, aimed at restoring trust and relationship. We hope a transparent dialogue will contribute to policies which recognize, uphold, protect, and promote the rights of Christians living in Turkey. It is through these small yet important steps of honoring the other that true reforms can ultimately be brought about.”

When Was Jesus Born? Italian Resea...