We Need to Focus on Our Real Enemies 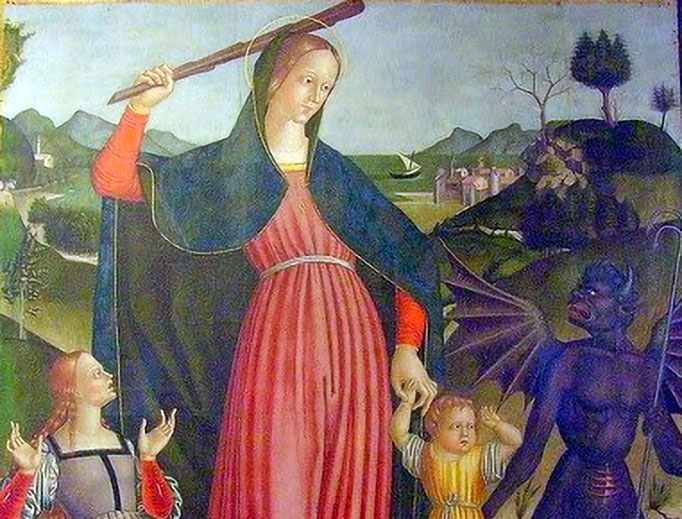 We Need to Focus on Our Real Enemies

Demons don’t care about the issues of the day — they care only about tempting and destroying.

Hotly contested issues are dividing families and friends. Vilifying and violent words tear across the Internet, leading to skirmishes in person. One man evenknifedanother over the mask issue! Not only are statues of public figures being pulled down and vandalized, but religious statues and churches are under attack. Strife reigns in many of our cities, while multiple business and lives, including black businesses and lives, have been harmed or lost in the melee.

Political bickering isn’t new in the U.S, and discord has steadily been corrupting internet discourse for years. What is new is level of vitriol and accusations in political and even health “discussions” (if we can even call them that anymore). Priests, religious, and churches have been attacked throughout Christian history and in increasing numbers in recent years in various parts of the world. But now that kind of thing happening here in America on an ever-widening scale.

Americans are as divided, if not more, than 200 years ago. Members of both major political parties are accusing the other party of conspiracy. Each group views the other as villainous, as the enemy.

But who is the enemy really?

Let’s back up a little and first ask, is this how God wants us to behave?

Yes, there are times when we are called upon to fight against oppression, injustice, etc. But that’s not the first step; moreover, we live in the first free country to lay down the rules for peaceful protest and free speech in order to debate one another nonviolently. And yes, even Jesus said he brought a “sword” — in that families and friends might split over the decision to follow him. But he spent much more time and words on love and unity and not assuming things about other people.

Jesus undoubtedly wanted to improve the way we look at one another.

He taught the Golden Rule and then went beyond it: “Whatever you do to the least of my brothers, that you do unto me.” Since he also told his followers to spread the Gospel to the whole world, desiring all to be saved (Matthew 28:19; 1 Timothy 2:4), this means we’re to see Christ in everyone, as every person is a potential brother or sister in Christ.

Jesus didn’t stop even there though. Probably his most revolutionary and most-difficult-to-live-out teaching is “Love your enemies, do good to those who hate you, … pray for those who abuse you” (Luke 6:27-28). Ananias had to treat Saul as a brother before the latter could convert and really become one. Paul then not only became a brother in Christ but a saint and one of the greatest apostles of all time.

Clearly, Jesus didn’t want us to assume the worst of other humans or see them as perpetual foes.

St. Paul helps us in this effort by directing us to look beyond human antagonists to those who may be influencing them: “For our wrestling is not against flesh and blood; but against principalities and powers, against the rulers of the world of this darkness, against the spirits of wickedness” (Ephesians 6:12, Douay Rheims).

Satan has long been seen as “the great divider.” Demons don’t care about the issues of the day; all they care about is polarizing us and getting us to sin.

We can see this playing out in real time and over history. In every era and culture, there are socially acceptable sins: “You once walked, following the course of this world, following the prince of the power of the air, the spirit that is now at work in the sons of disobedience” (Ephesians 2:2). But notice that every time society comes to recognize a past sin, it blinds itself to another. Demonic powers were quite happy to twist the just, much-needed 1960s; civil rights movement against segregation into a crusade for abortion, an even more terrible sin. (One which also disproportionately kills minorities’ babies in great numbers.)

Likewise, society is often swinging from one pendulum end to the other, or becoming not only divided over an issue, but increasingly polarized, as each side says more and more outrageous things in defense of its own views.

Whatever truth there may or may not be in various conspiracy theories, there surely is a conspiracy among Satan — against all humans. They will and do use everything possible to divide and destroy us. Guess who originated the “divide and conquer” strategy in the first place?

We Were Warned About This

Our Mother has imparted alarming warnings for the past 100+ years. I’m not talking about questionable or unapproved apparitions; I’m talking about the much rarer approved Marian apparitions. (I researched and wrote aboutsix of these; they are quite credible, especially considering the Catholic Church is very cautious about approving private revelations.)

Perhaps most pertinent right now isMary’s warning in apparitions in Akita, Japan, that were approved by the local bishop: “The work of the devil will infiltrate even into the Church in such a way that one will see cardinals opposing cardinals, bishops against bishops.”

(Well, hasn’t that been true, especially in the past two years?)

She continued, “The priests who venerate me will be scorned and opposed by their confreres … churches and altars sacked.” Instances of priests being attacked and of churches and altars being vandalized, burned, and (some) destroyed have been rising around the world in the new millennium. Now it’s increasing here in America too.

What We Can Do

It’s not a matter of never speaking of controversial topics. It’s a matter of putting a guard on your tongue and your posts — incidentally, also the most fruitful way to engage with others.

Remember you know little or nothing of others’ hearts, minds, and pasts, so avoid assumptions, accusations, and judgments (Matthew 7:1-2), especially of others’ intentions;
notice and compliment any virtues or good points in your opponent; start and end your statements positively;
find and express the common ground;
express yourself politely, respectfully, and charitably;
speak generally and/or of your own experience and give others the benefit of the doubt on their good will and good intentions;
stay on point, verify what you hear, and be logical not emotional;
in sum, win a soul, not an argument.
In difficult cases, pray an “instant” novena of Memorares, asking for Mary’s prayers before the conversation or written exchange.

It’s time to heed Mary’s requests — or if one has already been doing so, to ratchet up the fervor and spread the word. In nearly all of Mary’s recent approved apparitions, she begs us to pray theRosarydaily. It takes only about 15-20 minutes, so it shouldn’t be hard. And yet many people, myself included, do find it quite hard to concentrate during the Rosary and to make ourselves pray it day after day. I see the very fact that something so simple should be so difficult as sign that Satan is determined to keep us from praying it — which in turn testifies to its power.

One thing to be sure is that the devils fear Mary because of what God has done for, in, and through her (James 4:7). So, let’s take up the Rosary as she’s requested, and ask her powerful intercession.

In addition to the Rosary, here some more great prayers for spiritual warfare and for our time:

theSt. Michael prayer,
theDivine Mercy Chaplet,
Mass (the single-most powerful prayer of all, being the sacrifice of Christ himself), and
theFive First Saturdaysdevotion.

Right after saying that we contend with evil spiritual forces, St. Paul entreats us to put on the “whole armor of God.” One can pray that Scripture passage, but we also need to live it out. Girding ourselves with the truth, putting on “the breastplate of righteousness,” and taking up “the sword of the Spirit, which is the word of God” means learning and following Scripture and the teachings of the Church, especially going to Sunday Mass and to confession regularly.

Fast, as well as Pray

Remember what Jesus said when his disciples asked why they couldn’t drive the devil from a boy? “This kind cannot be driven out by anything but prayer and fasting” (Mark 9:20). We need to fast!

Yes, I know it’s hard, often very hard. There’s a reason fasting is so hard these days: the American diet. It’s heavy on simple carbohydrates and sugar, which stimulates the appetite. Often. There’s a wonderful book with a six-week program that helps one get out of that rut:Eat, Fast, Feastby Jay W. Richards. I’m doing it myself right now and highly recommend it.

If your health allows, fast on liquids or bread and water. Those with health concerns could fast on cold leftovers or food they’re not crazy about.

One can also start by abstaining. For instance, abstain from meat on Fridays beyond Lent (and Wednesdays too, as did the early Christians). Or abstain from screens for at least hours if not a full day. Abstain from treats, salt, cream/sugar in your coffee, or complaining — i.e., your attachments. There are hundreds of possibilities.

Whatever form your sacrifices take, make some to strengthen your prayer.