‘We Never Leave the Lord Alone’: 135 Years of Eucharistic Adoration at Sacré-Coeur 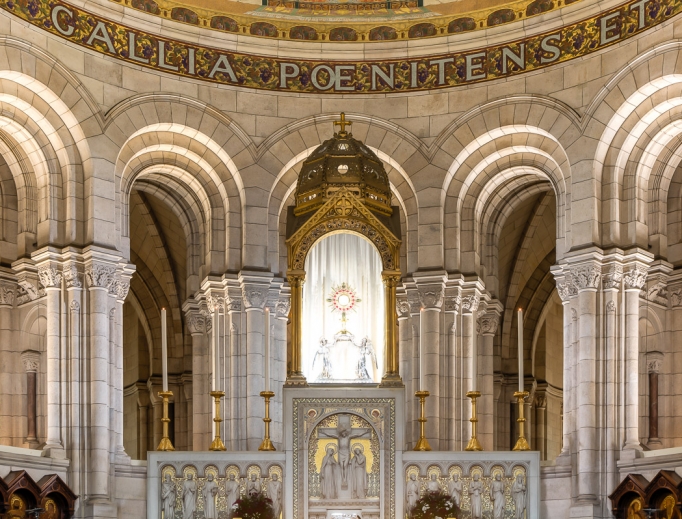 ‘We Never Leave the Lord Alone’: 135 Years of Eucharistic Adoration at Sacré-Coeur

Since Aug. 1, 1885, the chain of perpetual adoration of the Holy Sacrament at the Basilica of the Sacred Heart in Montmartre in Paris has continued uninterrupted, including during the 1944 bombing and the coronavirus crisis.

As the health crisis caused by the coronavirus epidemic immersed the whole country into a long period of lockdown March 17, Sacré-Cœur Basilica in Paris, which had to close its doors for the first time in its history, nonetheless remained an unflappable beacon of prayer in France.

Enthroned at the top of the emblematic butte Montmartre, the highest point of the city, the basilica is particularly prized by tourists and art lovers for the purity of its Roman-Byzantine architecture and its rounded shapes.

It is, after the Cathedral of Notre Dame, the second-most-visited monument of the City of Light.

But this high place of world tourism, as a “Sanctuary of Eucharistic Adoration and Divine Mercy,” is also one of the most important religious sites of France.

Day and night since Aug. 1, 1885, the Body of Christ in the Holy Sacrament has been exposed and adored inside the basilica (except for Good Friday), whatever the external conditions, even the most extreme. This is remarkable, as the history of France hasn’t exactly been calm since that time, including for the Catholic Church, which is also facing an unprecedentedwave of secularizationat every level of society.

“The adoration hasn’t stopped even for a minute, including during the two world wars,” Sister Cécile-Marie, member of theBenedictine Sisters of the Sacré-Cœur de Montmartreand responsible for the nights of adoration at the basilica, told the Register. “Even during the 1944 bombing, when some fragments fell right next to the basilica, the adorers never left.”

Adoration in the Time of COVID-19

And the recent quarantine period was, of course, no exception. While, usually, many lay or religious people come from outside and take turns in perpetual adoration, this unprecedented situation necessitated the 14 nuns of the community to reorganize their daily life in order to keep honoring the special tradition of the sanctuary, which stayed closed to the public for more than two months, until May 31.

“It was obvious to us that since we were not touched by the coronavirus, as long as we were still on our feet, we had to act and adapt quickly to this new situation,” Sister Cécile-Marie continued.

Each nun had to pray in adoration one hour twice a day to ensure a 24/7 presence, including during meals. “We never leave the Lord alone, and one cannot leave before the next person arrives, which could be pretty difficult at night when one of us didn’t wake up on time!” she said, adding that this has also been an opportunity for them to focus more on prayer and thus reconnect with the very essence of their rule of life.

However, she confessed, the lockdown also created a totally unusual sense of emptiness within the church, usually crowded with pilgrims and visitors. In her view, the most difficult thing to handle when the basilica suddenly emptied was the sight of all the candles slowly going out.

“It was a very sad vision, but, miraculously, we immediately started receiving requests of intentions of prayer from people via email; so, eventually, there were always at least one or two candles burning, and when they were about to extinguish, we would suddenly receive another request, which was so comforting.”

And the Benedictine community was quickly joined in prayer by a multitude of adorers who prayed with them remotely, following anonlinetable for intentions of prayers.

“It was a beautiful experience: We were alone in the basilica, but we felt we were always connected with the adorers that were in spiritual communion from where they were,” Sister Cécile-Marie recalled. “We couldn’t help people by wearing white coats, but we fought the epidemic our own way: through prayer.”

A Place of Reparation

The construction of the basilica wasn’t even completed when perpetual adoration was initiated. The historical context in which the building project was born was particularly sensitive and painful for the French nation.

Indeed, the French defeat in the Franco-Prussian War following theSiege of Parisin 1871 left a strong sense of hopelessness among the population and was often associated in the collective mind with a weakening of the faith as a consequence of the French Revolution.

It was then, as an act of reparation designed to instill hope in the nation’s heart, that two laymen,Alexandre LegentilandHubert Rohault de Fleury, initiated and developed the ambitious project to build a church dedicated to the Sacred Heart of Jesus, with the support of a large network of friendships.

And the place chosen by the then-archbishop of Paris,Joseph-Hippolyte Guibert, for the construction owes nothing to chance: It was in Montmartre, which literally means “Mount of Martyrs,” that the first Christians of Paris, includingSt. Denis, were killed in hatred of the faith in the third century.

“The foundress of our community,Mother Adèle Garnier, heard about the project and received soon after a divine call to establish perpetual adoration in this new church dedicated to the Sacred Heart of Jesus, and she submitted this idea to the archbishop of Paris,” Sister Cécile-Marie said.

But the building process, started in 1875 and completed in 1914, was particularly arduous because of the sand sub-base, which made the site unstable. Therefore, divine assistance was sought through the creation of a provisory chapel so that people could pray and meditate even during the work. “Times of adoration of the Holy Sacrament were already organized there, and the first pilgrims came, giving the first financial contributions for the building site,” Sister Cécile-Marie continued.

St. Thérèse of Lisieux herself was among the first contributors to the basilica, which could only augur a glorious future for the site. During a visit to Paris on her way to Rome with her family and a group of pilgrims, on Nov. 6, 1887, young Thérèse attended Mass at Sacré-Cœur and decided to offer her gold bracelet for the basilica’s monstrance.

It wasn’t until 1919 that the building was finally consecrated by Archbishop Guibert, five years after the completion of the work, as ravages of the Great War forced him to postpone the ceremony.

One century later, as the basilica’s first jubilee coincided with the COVID-19 pandemic, Paris Archbishop Michel Aupetit chose this emblematic place to conduct an extraordinaryblessing ceremonyof the French capital with the Holy Sacrament, on Holy Thursday, to seek God’s protection for the city and its inhabitants.

“Sacred Heart of Jesus … from this basilica, day and night, your mercy shines on this city, France and on the world, in the sacrament of the Eucharist,” Archbishop Aupetit said in his prayer raised from the basilica’s portico. “Assist all those who are suffering the consequences of the pandemic and support those who, in so many ways, put themselves at the service of their brothers and sisters. Give health to the sick, strength to the medical staff, comfort to the families and salvation to all those who have died.”