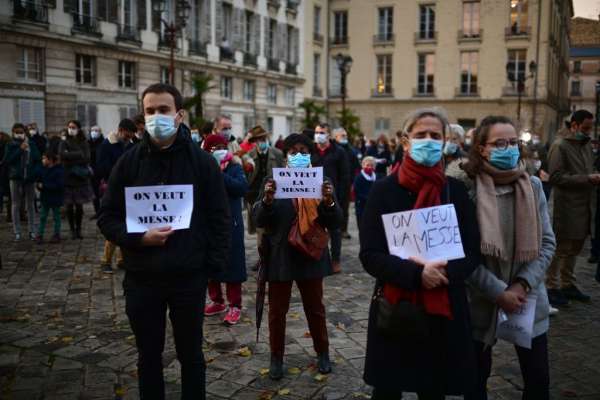 Rome Newsroom, Nov 16, 2020 / 10:04 am (CNA).- Catholics in France gathered outside churches in multiple cities this weekend calling on the government to allow them to attend Mass during the national lockdown.

Protests took place across France, including in Nantes, Strasbourg, Bordeaux, Rennes, and Versailles, Nov. 14 and 15. A Sunday protest planned in Paris in front of the Church of Saint-Sulpice was prevented by police after authorities said that it violated an order against praying in the streets, according to the AP.

Under France’s second lockdown, all public religious gatherings throughout the country, including public Masses, have been suspended until at least Dec. 1. All non-essential businesses, including restaurants, are closed, but schools remain open.

A legal appeal by the French bishops’ conference was rejected by the Council of State Nov. 7. The bishops had argued that the prohibition of public Masses violates freedom of worship.

At the outdoor gatherings, Catholics sang hymns and prayed the rosary under police supervision.
Catholic demonstrators can be seen in photos holding signs that read “We Want Mass” and “God the King.”

In Nantes, nearly 300 people stood in the rain in front of a statue of the Blessed Virgin Mary Nov. 15 and chanted: “Give us back the Mass.”

“Normally we should be at mass this Sunday morning. But we don’t have the right. We are deprived of this right for the second time in a row,” Marc Billig, one of the organizers of the Nantes protest, told local media.

French Interior Minister Gérald Darmanin said that he would meet religious representatives Nov. 16 after French bishops proposed the resumption of Masses with attendance limited to 30% of each church building’s capacity. The French daily Le Monde reported Nov. 16 that the current restrictions are not expected to be lifted until early December at the earliest.

In some dioceses, bishops urged Catholics not to gather outside in protest in light of the coronavirus lockdown.

“Let us not come together, neither outside nor inside churches, and show our ability to respect the frameworks given to us in the name of public health,” Dubost said.

Europe is currently experiencing a second wave of coronavirus cases, which has led Ireland and England to impose lockdowns and suspend public Masses, while Italy and Spain have implemented regional restrictions and curfews.

There have been more than 1.9 million coronavirus cases in France this year which has led to the deaths of 42,603 people, according to Johns Hopkins Coronavirus Research Center.

French health authorities reported Nov. 15 that the number of COVID-19 patients in intensive care has fallen since France implemented its lockdown, but these patients still take up 96% of the country’s ICU beds, AP reported.

In response to the French bishops’ appeal, a judge specified that churches can remain open during the lockdown and that Catholics can go to a church near their homes regardless of distance if they carry the necessary paperwork. Priests will also be allowed to visit people in their homes and chaplains to visit hospitals.

Catholic weddings can take place with a maximum of six people and funerals with no more than 30 people in attendance.

This was the second week of Catholic protests for some French cities. On Nov. 8 more than 500 Catholics gathered in front of the cathedral in both Nantes and Versailles, according to French RTL.

“They sang hymns, there was the prayer of the rosary, it lasted an hour, ” Bishop Bruno Valentin, auxiliary bishop of Versailles, told AFP.

Joe Biden and JFK: How Catholicism...

What St. Margaret of Scotland Can...