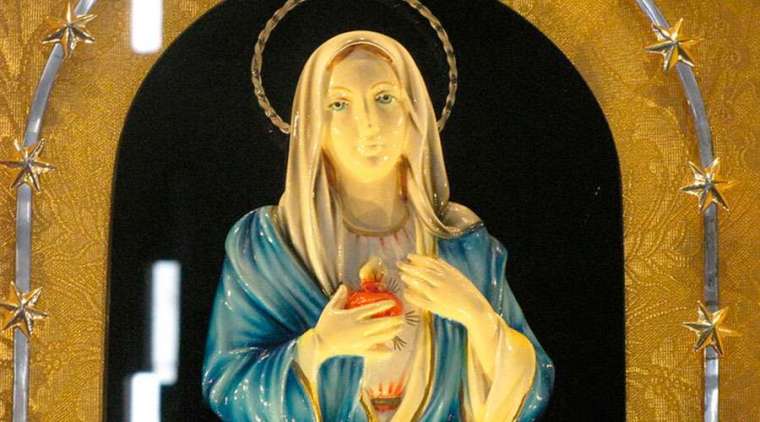 In an August 29 Mass offered by Archbishop Salvatore Pappalardo, the archdiocese of Syracuse on the Italian island of Sicily commemorated the miraculous shedding of tears in 1953 of an image of the Immaculate Heart of Mary.

The phenomenon took place in the home of Angelo Lannuso and Antonina Lucia Giusti, a young married couple who had received a plaster bas-relief image of Our Lady mounted on a plaque as a wedding gift.

The image first shed tears Aug. 29, 1953 and continued to do so at various times over the next four days.

Antonina was pregnant with her first child and was experiencing serious complications, of which she was cured upon witnessing the image weep for the first time.

Church authorities took a cautious approach to the phenomenon. The pastor of the local church, Fr. Giuseppe Bruno, came to the Lannuso home accompanied by several experts, including open atheist Dr. Michele Cassola, to investigate.

There, they directly witnessed the image weeping, the last time it did so. The experts would later be part of the investigative commission to determine the authenticity of the tears and their origin.

Upon testing the fluid being shed by the image, and comparing with human samples, Dr. Cassola said it was clear that the liquid from the image was analogous to human tears, although he had no scientific explanation for the phenomenon.

The final report of the commission was released on September 9, 1953. Three months later, on the feast day of Our Lady of Guadalupe, the bishops of Sicily unanimously declared that the image of the Mother of God had indeed wept. The tears would purportedly become the source of many miracles throughout Italy.

In an October 17, 1954 radio message to a Marian conference in Sicily, Pope Pius XII referred to the weeping image and asked, “Will humanity understand the mysterious language of those tears? Oh the tears of Mary! Upon Golgotha they were tears of compassion for her Jesus and of sadness for the sins of the world. Does she cry again for the renewed wounds produced in the Mystical Body of Jesus? Or does she cry for so many sons, in which error and sin have extinguished the life of grace, and who gravely offend the Divine Majesty? Or are they tears awaiting the belated return of her other sons, once faithful, and now dragged down by the false mirage of the legions of the enemies of God?”

The large number of faithful who came to venerate the miraculous image led to the construction of a shrine in 1968, which was later renovated in 1994. That year, Saint John Paul II consecrated the shrine on November 6 during his pastoral visit to Catania and Syracuse.

The pontiff said on that occasion that the tears of the Virgin “bear witness to the presence of Mother Church in the world.”

“They are tears of sorrow for those who reject God’s love, for families separated or having difficulties, for young people threatened by consumer civilization and often disoriented, by the violence that still causes so much bloodshed, and by misunderstandings and the hatreds that open deep chasms between men and peoples.”

During the 2016 Jubilee Year of Mercy, the miraculous image was brought from Syracuse to the Vatican for a prayer vigil entitled “To Dry the Tears” led by Pope Francis. In his reflection, the pope said, “At the foot of every cross, the Mother of Jesus is always there. With her mantle, she wipes away our tears. With her outstretched hand, she helps us to rise up and she accompanies us along the path of hope.”

Two years later, on May 25, 2018, Pope Francis offered a Mass at the Santa Marta chapel in the presence of the reliquary containing the tears of the Virgin.

“[W]e pray to Our Lady to give to us and also to humanity, the gift of tears, because we need it, so that we can weep for our sins and for so many calamities that make God’s people and children of God suffer,” the Holy Father said.

There have been many claims of weeping statues or icons of Mary and other saints throughout history, but few of them have been deemed worthy of belief by the Church after extensive investigation.

Unlike Marian apparitions, where the Blessed Virgin appears to a member of the faithful with a message, weeping statues require the faithful to seek their own interpretations of the miracle, said “Miracle Hunter” Michael O’Neill in comments to CNA in 2016.