MORE FROM EWTN
FAITH & RESOURCES
Welcome to EWTN GB - Global Catholic Television Network - Copyright ©
Trending News
HomeArticleWhat is the history of the rosary and how can you explain the Hail Mary to a non-catholic?

What is the history of the rosary and how can you explain the Hail Mary to a non-catholic? 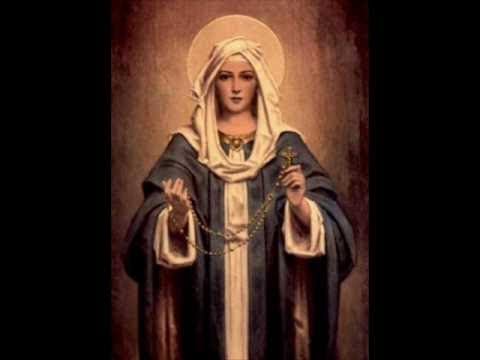 What is the history of the rosary and how can you explain the Hail Mary to a non-catholic?

The rosary probably began as a practice by the laity to imitate the monastic Divine Office (Breviary or Liturgy of the Hours), during the course of which the monks daily prayed the 150 Psalms. The laity, many of whom could not read, substituted 50, or even 150, Ave Marias (Hail Marys) for the Psalms. This prayer, at least the first half of it so directly biblically, seems to date from as early as the 2nd century, as ancient graffiti at Christian sites has suggested. Sometimes a cord with knots on it was used to keep an accurate count of the Aves.

The first clear historical reference to the rosary, however, is from the life of St Dominic (died in 1221), the founder of the Order of Preachers or Dominicans. He preached a form of the rosary in France at the time that the Albigensian heresy was devastating the Faith there. Tradition has it that the Blessed Mother herself appeared to St Dominic and asked for the practice as an antidote for heresy and sin.

One of Dominic’s future disciples, Alain de Roche, began to establish Rosary Confraternities to promote the praying of the rosary. The form of the rosary we have today is believed to date from his time. Over the centuries the saints and popes have highly recommended the rosary, the greatest prayer in the Church after the Mass and Liturgy of the Hours.

The rosary gained greater popularity in the 1500s, when Moslem Turks were ravaging Eastern Europe. In 1453, Constantinople had fallen to the Moslems, leaving the Balkans and Hungary open to conquest. With Moslems raiding even the coast of Italy, the control of the Mediterranean was now at stake.

In 1571, Pope Pius V organized a fleet under the command of Don Juan of Austria the half-brother of King Philip II of Spain. While preparations were underway, the Holy Father asked all of the faithful to say the rosary and implore our Blessed Mother’s prayers, under the title Our Lady of Victory, that our Lord would grant victory to the Christians. Although the Moslem fleet outnumbered that of the Christians in both vessels and sailors, the forces were ready to meet in battle. The Christian flagship flew a blue banner depicting Christ crucified. On October 7, 1571, the Moslems were defeated at the Battle of Lepanto. The following year, Pope St Pius V established the Feast of the Holy Rosary on October 7, where the faithful would not only remember this victory, but also give thanks to the Lord for all of His benefits and remember the powerful intercession of our Blessed Mother.

Rosary means a crown of roses, a spiritual bouquet given to the Blessed Mother. It is also, in a general sense, a form of chaplet or corona (crown), of which there are many varieties in the Church. Finally, in English it has been called “Our Lady’s Psalter” or “the beads.” This last derives from an Old English word for prayers (bede) and to request (biddan or bid).

The rosary has been called the preparation for contemplation and the prayer of saints. While the hands and lips are occupied with the prayers (it can and should be prayed silently when necessary so as not to disturb others), the mind meditates on the mysteries of the Incarnation and Redemption represented by the decades. Meditation is the form of prayer by which the one who prays uses the mind and imagination to consider a truth and uses the will to love it and form resolutions to live it. In this way the heart, mind, and soul of the Christian is formed according to the Gospel examples of the Savior and His First Disciple, His Mother. In God’s own time, when this purification of the heart, mind, and soul has advanced sufficiently the Lord may give the grace of contemplative prayer, that special divine insight into the truth which human effort cannot achieve on its own.

Why pray the Rosary today? Certainly, to grow in holiness and in one’s prayer life. The following are a few other reasons why the rosary should be prayed daily:

“Say the Rosary every day to obtain peace for the world.” (Our Lady of Fátima)

“Among all the devotions approved by the Church none has been so favored by so many miracles as the devotion of the Most Holy Rosary.” (Pope Pius IX)

“There is no surer means of calling down God’s blessings upon the family . . . than the daily recitation of the Rosary.” (Pope Pius XII)

The Hail Mary is the heart of the rosary and is said on each of the ten beads which are grouped together to form a decade, there originally being fifteen decades totaling 150 Hail Marys- as many Hail Marys as there are psalms. The first part of the prayer is composed of two Bible verses strung together: “Hail Mary full of grace, the Lord is with thee” (Luke 1:28) and “blessed art thou among women and blessed is the fruit of thy womb” (Luke 1:42)

The remainder of the prayer reads, “Holy Mary, Mother of God, pray for us sinners now and at the hour of our death. Amen.” As she was on earth called the object of divine grace (Luke 1:28) and is now in heaven a glorified saint, Mary is called “holy.”

The title “Mother of God” (Greek,

We know the saints in heaven are aware of what occurs to us (Heb. 12:1, Luke 15:7) and that they offer prayers (Rev. 5:8-10, 8:3), including praying for God’s intervention on the earth (Rev. 6:9-10). Hebrews 12:22-24 tells us we approach not only Jesus, “the mediator of the new covenant,” but the heavenly Jerusalem and the “assembly of the first-born enrolled in heaven” and “the spirits of the just made perfect.” Therefore, we don’t hesitate to ask for Our Ladies’prayers because the prayers of the righteous “availeth much” (Jas. 5:16b).