What It Means If OCP’s Angel Is Mormon 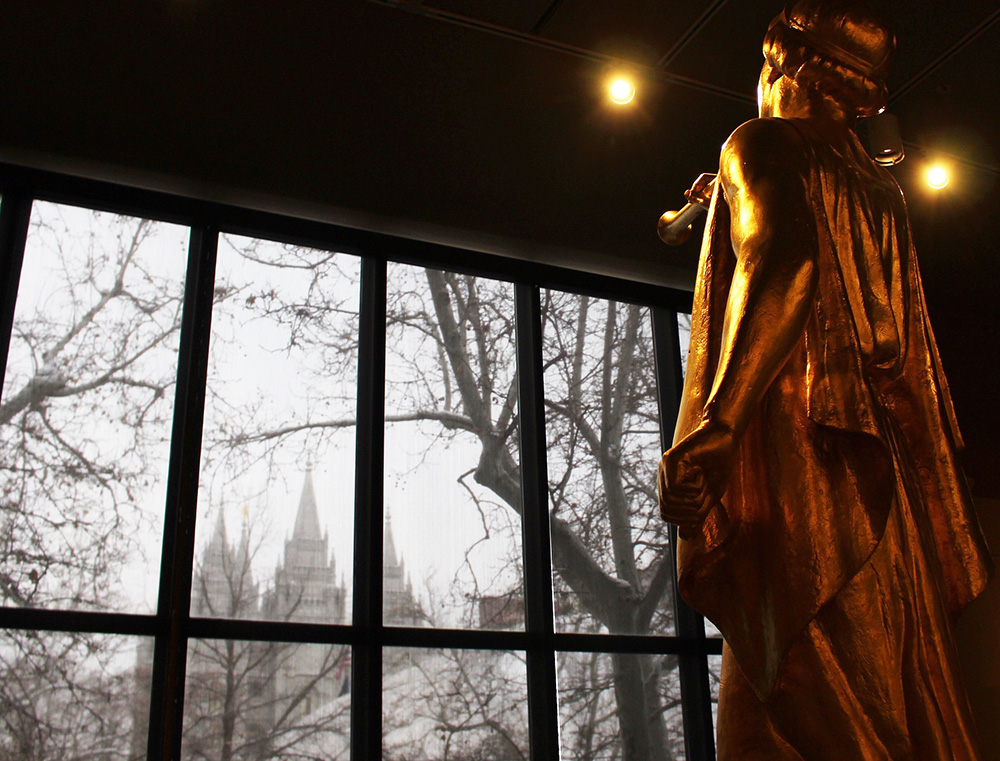 What It Means If OCP’s Angel Is Mormon

The missalette publishers responded to the problem of scandal, and the essence of art.

A scandalette erupted over the past few days with the release of Oregon Catholic Press’s 2021 hymnal. The scandal is not, for once, of a lyrical or musical nature; the eyebrow-raising issue is the cover art. It portrays a blond, white-robed figure standing on a glob, blowing a trumpet, and carrying a golden book—an angel?

The figure is currently labeledon the artist’s website as “Angel VIII (2017).” But it’s more complicated than that, because another angel in the series is called “Angel Moroni (2018)”. Complicating matters further, an Instagram account associated with the artist, Jorge Cocco, identifies the OCP image (and “Most of the angels in this collection”) as “different versions of the angel known as Moroni” (h/t Father Matthew Schneider and Deacon Greg Kandra). OCP, however, initially stated on Facebook that while they understand Mormons seeing it as Moroni, they “saw a beautiful image of an angel, and nothing more.” They took it as an image of the last day, and, “[t]o ensure this didn’t conflict with the original intent of the art,” they “consulted with the artist. He stated, ‘This angel does not have a name, it is left to the interpretation of the viewer.’”

It’s hard to know the artist’s intention in this particular case, since he seems to have two different stories about who the angel is. Not surprisingly, OCP at first decided that the artist’s intention (or lack thereof) was irrelevant—a position which is, from an academic viewpoint, arguably correct. What they offered concerned customers was, essentially, reader-response theory.

Reader-response theory—a reaction of the 1960s and ’70s to earlier modes of interpretation concerned with literary form—argues that what truly matters in understanding a work of art is the consumer’s interpretation. By this reasoning, if it were to turn out that Edvard Munch’s agonized portraitThe Screamwas actually intended as a bemused albeit alopecic individual attempting to hail her dog at sunset—that wouldn’t matter. What would matter is that hundreds of thousand of people think of the picture as the image of a soul in existential angst. For those people, that would be the “meaning” ofThe Scream.

There are intelligent and unintelligent ways of performing reader-response criticism, of course. Some literary scholars produce real insights with the method (e.g., Stanley Fish). But oftentimes when ordinary people practice it, reader-response criticism becomes a fancy name for “how this artwork makes me feel.” Those feelingsmaybe interesting outside one’s immediate circle—but that is more likely to happen when one knows as much as Stanley Fish does, which is more than most of us can remember.

Reader-response criticism, then, may be occasionally enlightening, and is frequently entertaining—performance art in its own right. But reader-response theory, however delightful its products might be, fails to address two issues that were surely at the heart of many Catholics’ concerns about Jorge Cocco’s “Angel VIII”: scandal, and idolatry.

Scandal is the issue to which OCP’s response seems geared. If a Catholic publisher accidentally put a hagiographic image of, say, abolitionist John Brown on the cover of a missalette, under the mistaken impression that the image represented Moses, there would be no problemas long asusers of the missalette shared the assumption that the cover depicted Moses (or some other hirsute patriarch). But once people became aware that the original image was intended by the artist to represent John Brown, there would be scandal. Why (Mass goers might ask in genuine confusion) are we honoring John Brown in a religious context, given his mixed character?

To be sure, a pastor well-grounded in reader-response might be able to allay the scandal by assuring his congregation that when he looked at the image, he saw Moses—or Enoch—or possibly Amos—and that might put the scandal to rest. But it’s a more prudent and much simpler solution not to put dodgy images on one’s covers in the first place.

Scandal, however, is the lesser issue here; for the fact is, whatever literary theory OCP may espouse, some images, forms, and signs can be tied to indelible realities. For instance,as we learned recently, the formula of Baptism has a certain reality that is lacking when the words are changed, e.g., when “I baptize” is altered to “We baptize.” Again, the words of the Consecration are tied to a certain Reality becoming present, and as such are not to be taken lightly.

The same is true on the other side of things: if a formula in Yoga or witchcraft is actually connected to a real being, then it’s better not to repeat that formula, even in jest. The same goes for images. Catholicism “baptized” the pagan Christmas tree and the Parthenon, but not pagan statues of Isis or Odin. The impersonal trappings of pagan religion can be used to reflect reality; but depictions of pagan gods, because they may depict real but evil entities—devils—cannot be adopted into Christian worship in the same blithe spirit.

With all due respect to our Mormon friends and allies, from the Catholic perspective, there is a real and nontrivial chance that “the angel known as Moroni,” if such a being was real, was a bad actor. And that is why, whatever reader-response theory might say, if “Angel VIII” really did represent Moroni in the mind of the artist when he created the image, a Catholic would be uncomfortable staring down at “Angel VIII” five times a Sunday morning until the end of 2021.

There is a happy ending to the story. If you go to OCP’s website today, you can see that one of their missal covers is …missing in action. OCP’s more recent Facebook post explains:

Dear Partners in Ministry, we have heard your concerns, we admit our error and we apologize for the cover art on the 2021 Respond & Acclaim and Music Issue. When we chose it, we were unaware of the association with the Mormon angel Moroni. Upon further reflection, we should have done more research, and we apologize for this embarrassing mistake. We would never knowingly use an image that is not authentically Catholic on our publications. We are working to finalize a plan to make things right for our customers and to ensure this never happens again. Again, we apologize for any offense this has caused, and ask for your forgiveness, prayers and Christian charity. Once we have a plan in place, we will be following up with affected customers to make things right.

The moral of the story? No doubt readers can respond with their own. Personally, I prefer to take this as a proof of the fact that, sometimes, polite and persistent argument can change things for the better.

After Discovering His Baptism, Ord...