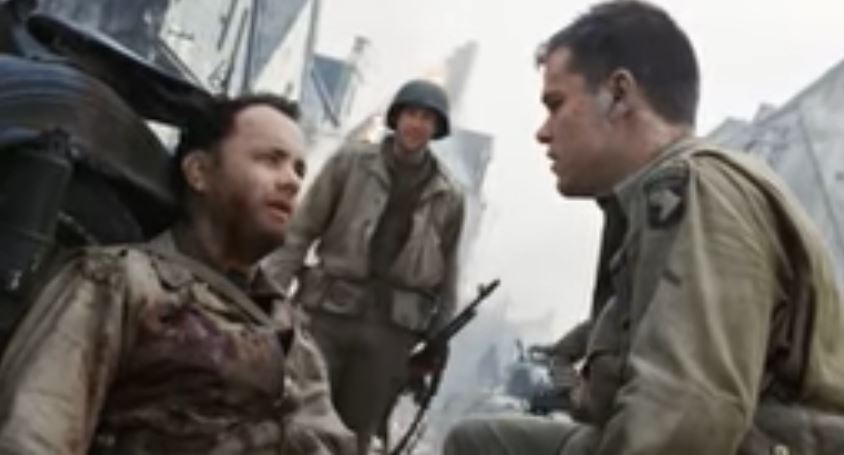 “Man is himself only because his face is illumined by a divine ray.”

Here is an image that has stayed with me for years: A camera zooms in, and I see a solitary old man standing high above Omaha Beach, surrounded by row upon row of graves marking the fallen. He has come to pay tribute to someone special. Bending over the grave of Capt. John H. Miller, he remembers the officer who led the effort to rescue him from behind enemy lines. Miller and most of his men would die trying to save him.

It is the final scene fromSaving Private Ryan,Steven Spielberg’s award-winning film from 1998 and, arguably, the most riveting moment in the entire movie. The old man, we learn, is none other than James Francis Ryan, who, his family standing nearby, speaks to the shade of the soldier who saved his life.

“Every day I think of what you said to me that day on the bridge,” Ryan says to the captain. “And I’ve tried to live my life the best way that I could. I hope that was enough. I hope that at least in your eyes I earned what all of you have done for me.”

What had Capt. Miller said to him? “James,” he told him as he lay dying, “Earn this. Earn it.”

Getting up, Ryan then turns to his wife, needing to hear from her that he has lived a good life. “Tell me I’m a good man.” “You are,” she tells him. And standing solemn and erect, he turns to salute the man whose sacrifice allowed him to grow old in the company of those he loves and who love him.

It is against that standard of sacrifice that the question of the moral life becomes existentially urgent. What does it mean to live a good life? Is there a formula to fit every contingency? Something the precise observance of which will entitle anyone to pronounce the meaning of his life as good and honorable, that it was worthwhile his having lived it? That he truly earned it?

In theMeditationsof the stoic emperor and philosopher Marcus Aurelius, there is this maxim:

“When you awaken with reluctance each morning, you are not to repine, for you are about to begin the work of a human being.”

Well, what does that mean? The work of a human being.It has certainly got to mean something more than not hitting the snooze button on first hearing the alarm go off. To live a life the best possible way one can, that has surely got something to do with virtue,a word not much in circulation these days — unlike, say, virtue signaling — but which has everything to do with conforming the will to right reason in all circumstances.

It is really a matter of respect, another old-fashioned word. Of respect for reality, for the truth of what is. Of never, as G.K. Chesterton would say, calling green grass gray. That is the only lie, he tells us, and to do so is to fall in with Lucifer, who was a liar from the beginning.

But respect extends also to others, whom we are to treat justly; and to ourselves, too, which requires that we discipline our appetite for pleasure as well as our aversion to pain. We used to call these the cardinal virtues, meaning the hinge on which the whole moral life turns. They are the “Big Four,” in other words: prudence, justice, fortitude and temperance; and not infrequently, asSaving Private Ryanmakes heartbreakingly clear, they are exhibited in the grip of overpowering fear and danger, when the threat of death is imminent and real.

St. Augustine, in a lovely Latin phrase, called itordo amoris, which is what happens when the affections are so governed by the good and the true that we give to things that love which is appropriate to them. A man will look after his lawnmower, intent on making it work, but surely not, if he is truly good, with the same sort of love and devotion he pays to his wife and family.

Persons are not objects of use, but endswhom we are to reverence for their own sake. Not to know that is an admission of barbarism, which is what happens when standards of honor and decency are swept away for the sake of pleasure and convenience.

And the ultimate source on which all this depends is God, whom we must never leave out of the equation. In fact, as Henri de Lubac reminds us in one of the great works of the last century,The Drama of Atheist Humanism, written during the dark days of the Nazi occupation of France, the decision to do so can never finally succeed.

“Atheist humanism was bound to end in bankruptcy,” he insists. “Man is himself only because his face is illumined by a divine ray.”

I have quoted that text so often that I hardly need look it up. Nor the illustration from the life of Constantine that, in my mind, always accompanies it. He was the first of Rome’s emperors to convert to the Christian faith; and soon after doing so, he flat out forbade the branding of slaves. On what grounds? That because God himself became one of us, taking on the form of a slave, there is something sacred sealed upon the flesh of all men.

Here is the birthplace of the idea ofimago Dei, that each of us is made in the image of God.

“The godhead is reflected in the slime of the earth,” de Lubac comments, citing a 12th-century text, “like the image in a mirror. If the fire disappears, the reflected gleam immediately goes out.”

How so? “For man, God is not only a norm which is imposed upon him and, by guiding him, lifts him up again: God is the Absolute upon which he rests, the Magnet which draws him, the Beyond which calls him, the Eternal which provides him with the only atmosphere in which he can breathe.”

This is the story we see being played out before us — a world without God becoming a place no longer fit for men. When you kill God or, at the least, politely banish him to the margins of the cosmos, he will soon disappear from the culture, as well — followed not long after with a near total eclipse from human conscience, it having become a space we no longer wish to rent out to God, or even any sort of fixed or objective sense of reality. That, too, has become more and more an antique fixture — like Victorian lace, which has grown too brittle for use.

C.S. Lewis warned us about this inThe Abolition of Man, a book as profound and prophetic as any passage in de Lubac.

Had that standard been applied when Capt. Miller was given his orders to go find Pvt. Ryan, he’d have refused, and poor Ryan might never have made it home, nor would Miller have done his duty to uphold the moral law, leaving an example of virtue to inspire others to follow. None of us would know this, of course, the witness of courage and sacrifice never having made it to the screen.