What Mary Wore: Tunics, Belts and Veils from Our Lady’s Closet 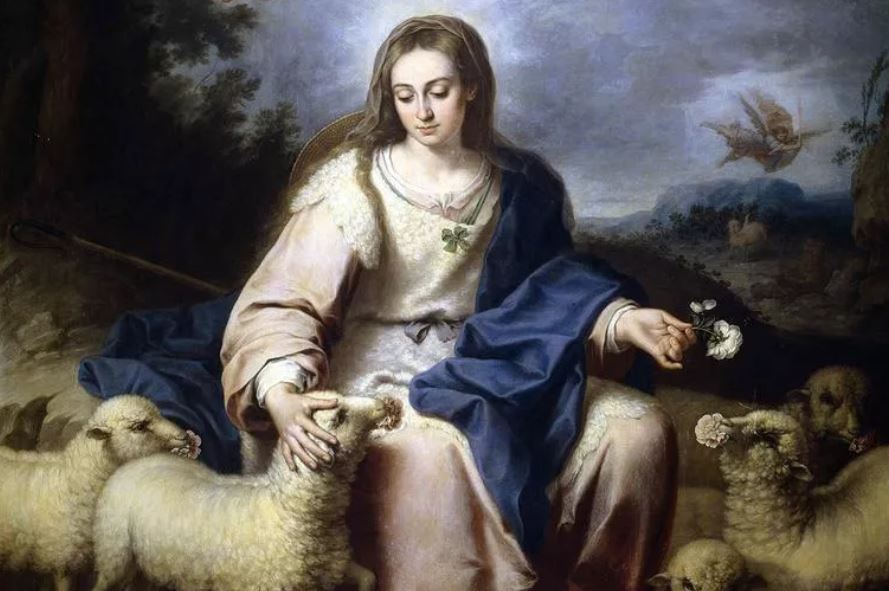 What Mary Wore: Tunics, Belts and Veils from Our Lady’s Closet

Why does Our Lady wear blue? And do we still possess her veil and belt?

In honor of the Solemnity of the Immaculate Conception, I thought I’d take a peek inside the Blessed Virgin Mary’s closet.

Why Did Mary Wear Blue?

First, there’s her closet full of tunics! Classical artists like Botticelli, Raphael and DaVinci frequently depict Mary wearing a red tunic topped by a blue mantle. The Flemish High Renaissance painter Jan Gossaert uses the red/blue scheme in some works, but also envisions her in blue over blue, with a white veil. And of course, there are the apparitions in which Mary wore white (at Lourdes and Fatima, for example); while at Guadalupe, she wore the vibrant colors of Mexican royalty.

Actually, the colors in Mary’s many costumes are not random selections from her walk-in closet — they are aflame with political symbolism. Renaissance painters chose red because it was the color worn by influential Jewish women of her time. Later, scholars decided that red too closely signified a loose or unchaste, “scarlet woman” and that Mary should instead wear blue. And Dan Lynch, in his article The Amazing Truth About Our Lady of Guadalupe, explains how the image of Our Lady is actually an Aztec Pictograph which was read and understood quickly by the Aztec Indians:

English Jesuit poet Gerard Manley Hopkins, in his poem The Blessed Virgin Compared to the Air That We Breathe, compared the air’s blueness to the Virgin’s transparent acceptance of God’s will:

Blue be it. This blue heaven —

the seven, or seven times seven,

perfect, not alter it.

So God was God of old.

A Mother came to mould….

But What About the Belt?

In 2011, the New York Times reported that as many as 3 million Russians queued up to kiss a glass-covered reliquary that they believed holds the Virgin Mary’s belt. The relic arrived in St. Petersburg on Oct. 20, beginning a month-long tour of Russian cities. When it arrived, Prime Minister Vladimir Putin was the first to venerate the holy relic, which is usually housed in a Greek Orthodox monastery on Greece’s Mount Athos. Many Russians believe that the relic, considered important within the Orthodox churches, can mystically help to overcome infertility or problems with pregnancy.

Similarly, the image of Our Lady of Guadalupe in Mexico wears a black belt which was distinguishable as an Aztec maternity belt. It remains until today the only apparition in which Our Lady appeared as she was during her pregnancy. One of the amazing results of the apparition was that within a short time, infant sacrifice was ended in Mexico.

And at Fatima, Mary wore only a pristine white gown. But at Lourdes, her white tunic was cinched at the waist with a long, flowing light blue sash.

And Mary’s Veil – the “Sancta Camisia”

In the Cathedral of Chartres, southwest of Paris, is a holy relic called the “Sancta Camisia,” the “holy veil.” A crumpled, faded cream-colored cloth, it’s protected in a glass reliquary. Tradition holds that the Sancta Camisia is the veil of the Virgin Mary — in fact, it’s the veil she wore when she gave birth to the Christ Child.

Was the Sancta Camisia really worn by Mary? Scientific study has confirmed that the veil dates to the first century. It was presented to the Cathedral at Chartres in 876 by Charles the Bald, grandson of Charlemagne, upon his return from Jerusalem. It was nearly destroyed by fire in 1194, but the bishop of Chartres rescued it just in time.

Is it really Mary’s veil? I don’t know — but despite efforts to refute the claim during the Protestant Reformation and the French Revolution, pilgrims still come to see it, to kiss the glass and to offer a fervent prayer.