What the Council of Ephesus Taught Us About Jesus and Mary 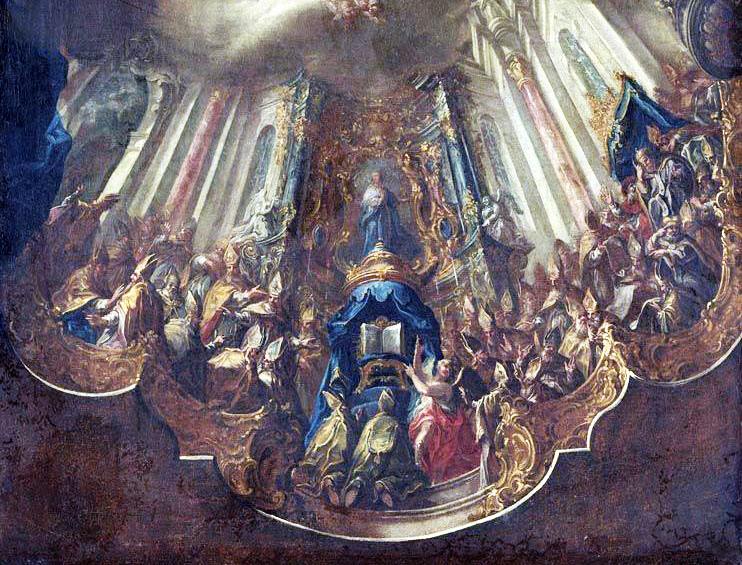 What the Council of Ephesus Taught Us About Jesus and Mary

When we speak of the glories of Mary, we are also speaking of her Son!

For a number of years, when I was teaching high school full-time, I was invited to come to the college-level seminary in my diocese and teach a class in Christology to the seminarians who were in pre-theology.

That term, “pre-theology,” always seems to confuse people when they encounter a seminarian who is in such a program. What does it mean to be a “pre-theologian”? Well, it’s pretty simple — it’s a seminarian who has already completed a bachelor’s degree (or, in some cases, even a graduate degree) but has not studied enough classes in philosophy to enter into the study of theology just yet. They are not “collegians,” those seminarians who are studying for a bachelors’ degree (usually in philosophy), and not yet “theologians,” those seminarians formally studying theology in their last years of formation before priestly formation. While in pre-theology, these young men (and some not so young!) not only studied philosophy, but also took classes in Latin and Greek, as well as some classes in theology.

The class was a great pleasure for me to teach because, unlike many high school students, these seminarians were active and engaged. Like most of my classes, I began the course by stating some definitions — namely, what exactly is Christology and what is soteriology?

I would explain to the seminarians that Christology is, by definition, the study of the person and natures of the Lord Jesus Christ. Christology, simply put, answers the question “WHO is Jesus?”

Soteriology comes from the Greek word “soter,” which means “savior.” Therefore, soteriology, as a theological discipline, is the study of the saving action of the Lord Jesus Christ. Again, in plain language, soteriology answers the question “WHAT does Jesus do?”

I would tell the seminarians that the Lord’s nameJesus, which means “God Saves,” is both a Christological and a soteriological title. His very identity tells us what he does — he is God and he saves us! The title Christ in Greek means “Anointed One.” Thus, when we say “Jesus Christ” it is a statement of faith. It means “the Anointed One, who is God, saves.”

When the time came for a final exam, I would ask the seminarians one question: “Which of these two Ecumenical Councils (Ephesus [431 AD] or Chalcedon [451 AD]) is more Christological? Please back up your opinion with facts about the Councils.”

I always thought it was a really great question because there really is no wrong answer per se. The Council of Ephesus was all about examining the unity of the person of Jesus Christ and examined this by discussing, among other things, the fact that Blessed Mary, Ever-Virgin, is the Mother of God.

The Council of Chalcedon was a great clarifying Council, reaffirming the Nicene Creed and Pope Leo the Great’s great Christological tome to Flavius. Both say a great deal about the Lord Jesus. Both are very Christological. Technically, both answers are correct. Many, if not most, of the seminarians chose the Council of Chalcedon as the more Christological of the two. When I asked why, many of the seminarians stated that that the Council of Ephesus was all about the Mother of God, Blessed Mary, the Ever-Virgin, and therefore was not Christological. And this is where I would have to mark them down a grade because when we speak of the glories of Mary, we are also speaking of her Son!

The Council of Ephesus was the Third Ecumenical Council of the Church. The main issue at stake was, how do we articulate the unity of Christ. In the year 428, the Emperor Theodorius II appointed Nestorius as the Patriarch of Constantinople. Here, it might be important to recall that Constantinople was the only Patriarchate that was not established by an Apostle (unlike Jerusalem, Antioch, Alexandria, and Rome). Please also recall that historically things were really changing and the Emperor was really trying to position Constantinople on par with Rome.

Basically, the question at stake here is this: Is the unity of Christ such that his mother can be called the Mother of God? I realize that this is without the nuances required for a detailed study, but for the sake of this article, I wanted to keep it rather “bare-bones.”

For the Church in Alexandria, the Blessed Virgin Mary was known as the Theotokos (the God-bearer). This irked Nestorius tremendously because he felt that the title made the Blessed Mother sound like she was the source of the divinity of Christ, or perhaps even divine herself. Nestorius felt that applying the titleChristotokos(the Christ-Bearer) would be more appropriate. Both titles are accurate — the Blessed Virgin Mary is the Mother of Christ, because Jesus is the Christ. However, Our Lady, Blessed Mary, is notonlythe Mother of Christ. She is the Mother of God because Jesus the Lord is God! He is one divine person in two natures, human and divine. And to reiterate, when we praise the Blessed Mother, we are praising the Lord as well. She is the moon, reflecting the light and warmth of the sun, her Son, Our Lord Jesus.

I know that this is a lot to take. Let me stop here and, in my next piece, I will explain a bit more about the importance of the Council of Ephesus, some of the principal persons involved in the Council, its aftermath, and why when we praise Our Lady we are also glorifying Our Lord!

Which Catholic Bible Translation i...