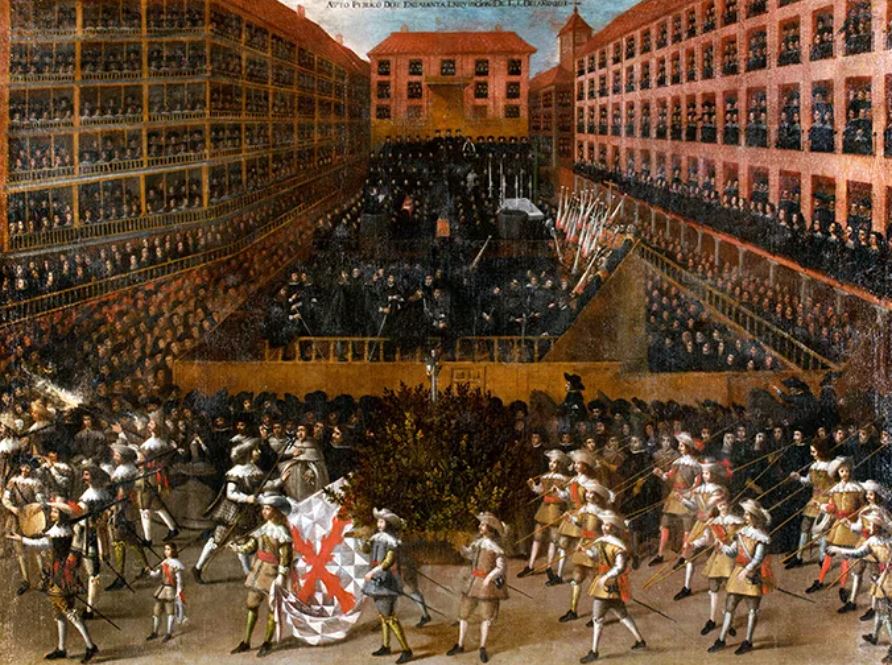 In his bull Excommunicamus, Pope Gregory IX formally instituted the Inquisition in 1231 as a means of repressing heresy, particularly that of the Albigensians. Prior to this time, similar mechanisms had existed. For instance, St. Augustine (d. 430) upheld the right of the state to punish the Donatist heretics for their own benefit as well as for protecting the faithful, although he also maintained that charitable and convincing instruction should be used before any corporal punishment (short of execution). The Inquisition was first established in Germany, extended to Spain in 1232, and became a general institution be 1233.

Usually, two inquisitors with equal power held directly from the pope presided over the tribunal.

One must remember that one of the primary purposes of a formalized Inquisition was to ensure justice and to eliminate unfounded charges or vigilante justice. The inquisitors even followed a guide, such as the Processus inquisitionis (1249) which outlined various acts and provided commentary about certain cases. Accordingly, an inquisitor could bring a charge against any individual who had been accused by someone or was suspected of heresy. The accused person would take an oath swearing to tell the truth and was confronted with the evidence. The accused, however, was neither informed of the identity of the witnesses nor allowed to confront them; this practice was adopted to protect the witnesses from reprisals from family or friends.

On the other hand, the accused had to supply witnesses in his defense. Inquisitor Eymeric stated, “If the accused has public opinion against him, but nevertheless it cannot be proven that he has deserved his reputation as a heretic, he has only to produce witnesses who can testify to his condition and habitual residence, and who, from long knowledge can affirm that he is not heretical.”

Nevertheless, the accused could appeal to the pope prior to the final judgment, and many did.

The State and the Inquisition

During the first three decades of the thirteenth century the Inquisition, as the institution, did not exist. But eventually Christian Europe was so endangered by heresy, and penal legislation concerning Albigensianism had gone so far, that the Inquisition seemed to be a political necessity. That these sects were a menace to Christian society had been long recognized by the Byzantine rulers. As early as the tenth century Empress Theodora had put to death a multitude of Paulicians, and in 1118 Emperor Alexius Comnenus treated the Bogomili with equal severity, but this did not prevent them from pouring over all Western Europe. These various sects were hostile to Christianity and to feudal government by their attitude towards oaths, which they declared under no circumstances allowable. Nor were their views less fatal to the continuance of human society, for on the one hand they forbade marriage and the propagation of the human race, and on the other hand, they made a duty of suicide through the institution of the Endura – the Albigensian ritual suicide. It has been said that more perished through the Endura than through the Inquisition. It was, therefore, natural enough for the custodians of the existing order in Europe, especially of the Christian religion, to adopt repressive measures against such revolutionary teachings.

Truths about the Inquisition

1. In all the Inquisitions throughout Europe together, scholars estimate the number of people executed ranged somewhere between 3,000 and 5,000. That averages, at most, about fourteen people per year throughout the entire continent over a period of 350 years, and not the 10 million Dan Brown and those who think him a serious historical scholar, have suggested. (NB: The death of 10 million people would have completely and irrevocably depopulated Europe during the Medieval Ages.)

2. Prosecuting witchcraft was a popular craze in Europe’s secular courts at the time. Local governments were particularly intolerant of these offenses. The accused were often burned at the stake. For the Catholic Church, charges of witchcraft were seen as delusions and treated thusly. This Church law came into being in the 7th century. Hard evidence had to be shown for any accusation. Witchcraft and sorcery were rarely capital offenses. The overwhelming number of accusations were dismissed.

3. The last two people to be executed for practicing witchcraft were Anna Göldi (Glarus, Switzerland, in 1782) and Barbara Zdunk (Prussia in 1811.) Both were Protestant-ruled countries and therefore had no connection to the Inquisition. In fact, popes at the time wrote letters begging for local authorizes to spare the lives of the accused witches but to no avail.

4. The Inquisition rarely relied upon torture to extract information. It was used less by the Inquisition than it was in the tribunals of other countries throughout Europe at the time. The stories of Protestant torture of Catholics in the Tower of London were by far more gruesome, including that of St Nicholas Owen.

1. The major source of information about the wildly unrealistic excesses of the Inquisition is the A Discovery and Plaine Declaration of Sundry Subtill Practices of the Holy Inquisition of Spain written in AD 1567. It was authored by Antonio del Corro, a Spanish Lutheran who wrote under the pseudonym Reginaldus Gonzalvus Montanus and claimed to be, himself, a victim of the Inquisition. Scholars know this to be a lie.

3. The majority of the “histories” about the Inquisition written after AD 1567 relied on Montanus as their definitive source. This document and other subsequent publications, were reprinted and translated throughout Europe and became the source on the Inquisition myths for many centuries even until the present day.

4. The “Black Legend” began as an anti-Spanish propaganda campaign that succeeded largely because of the invention of the printing press. The Inquisition and Carlos V were their prime targets.

5. Stories about cruel torture methods used by the Inquisitors and the terrible conditions in which prisoners were kept were completely falsified. The Inquisition actually had the best jails in Spain. In fact, records prove prisoners of secular courts and jails would blaspheme so they could be transferred to Inquisition prisons and thus escape the maltreatment of secular prisons.

6. The Inquisition never punished or tortured Jews and Moslems as the Church had no authority over non-Christians. Instead, these were people who supposedly converted to Catholicism but did so under false pretenses.

7. In the entire 16th century, the Spanish Inquisition executed only about 50 people—not the hundreds of thousands that are claimed by the “Black Legend.”

8. The anti-Catholic propaganda started immediately after Emperor Carlos V’s overwhelming victory during the 1547 Battle of Muelburg when the Protestants armies were annihilated. When the Reformers realized Spain’s overwhelming military superiority, they used the printing press to attack his character. This is what led researchers to realize the Inquisition was one of the most successful propaganda campaigns in world history. Protestants were very skilled in the lies they spread about the Catholic Church and the Inquisition in particular. Emperor Carlos refused to address the lies as he believed that gentlemen fought with weapons on a battlefield and not with ideas safely hidden behind a printing press.

9. Though propaganda suggests millions of people were imprisoned and tortured, there had only been 7000 cases brought before the Spanish Inquisition in total.

10. Inquisitors had very strict guidelines as to what could and couldn’t be done taking great efforts to make sure people weren’t hurt especially the innocent. The guidebook was entitled Instructiones.

What is sola scriptura and how can...