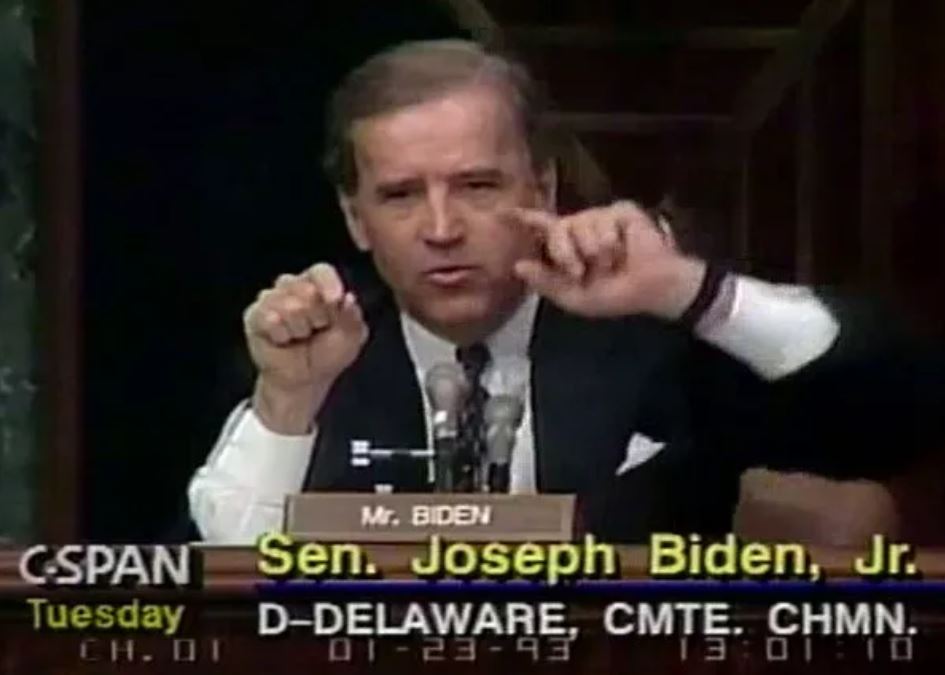 Sen. Joe Biden, shown asking questions at a Senate Judiciary Committee hearing in 1993, was elated the year before when ‘Casey’ was decided in 1992. (photo: C-SPAN/Public domain via Wikicommons)

COMMENTARY: 1992’s ‘Planned Parenthood v. Casey’ was anything but reprehensible to a senator from Delaware.

The place: the Amtrak station in Wilmington, Delaware.

Two men spot one another. They wave; they smile; they run; they dash into one another’s arms. They can’t stop hugging. They are jubilant, ecstatic — literally moved to tears. Why? Because Roe v. Wade was just saved. And they played a crucial role.

The two men are both U.S. senators: Joe Biden of Delaware and Warren Rudman of New Hampshire.

“At first, I didn’t see Joe; then I spotted him waving at me from far down the platform,” recorded Rudman wistfully in his memoir, Combat: Twelve Years in the U.S. Senate. “Joe had agonized over his vote for David, and I knew how thrilled he must be. We started running through the crowd toward each other, and when we met, we embraced, laughing and crying.”

David? Yes, he was the third man in this political romance. He was Justice David Souter. He had just provided the crucial swing vote in the landmark 1992 Supreme Court decision, Planned Parenthood v. Casey, a seminal case that had barely — by a vote of 5-4 — enshrined Roe v. Wade as the law of the land. The majority opinion was written by Justices Souter, Anthony Kennedy and Sandra Day O’Connor (all appointed by pro-life Republican presidents).

It could have gone the other way. But Souter had stopped it. Roe was saved. Abortion was saved.

“It was perhaps the greatest judicial atrocity in American history,” writes one legal scholar of the awful majority opinion. “Casey is clearly one of the most significant Supreme Court cases of all time, and arguably the Court’s most reprehensible decision ever.”

But not to Joe Biden. Planned Parenthood v. Casey was anything but reprehensible to the senator from Delaware. Biden wept tears of joy in the arms of Rudman, shouting triumphantly of Souter: “You were right about him! You were right!”

Rudman was indeed right. He had pushed Souter’s nomination by Republican President George H.W. Bush. He ensured liberal colleagues that Souter was okay. Rudman, a pro-choice Republican, had been Souter’s boss at the New Hampshire Office of the Attorney General. Yes, he and Biden were from opposing parties. But they were united by abortion. Here, they found common ground — or, as Nancy Pelosi puts it today, “sacred ground.”

Rudman was confident that Souter would not vote against Roe. After all, averred Rudman, Souter was “a compassionate human being.” He would naturally support continued legalization of abortion — which at that point had snuffed out the lives of 25-30 million unborn babies in America (according to the Guttmacher Institute).

But Rudman’s allies on the Democrat side weren’t so sure. And Rudman had to walk a fine line, since his pro-life president purportedly wanted a pro-life justice. So Rudman quietly sought to assuage liberal Democrats like Biden and Ted Kennedy. He urged the two pro-choice Catholic senators to trust him. And no single member of the Senate Judiciary Committee was as important as Joe Biden, who chaired the committee. He ensured that Souter sailed through. Souter cruised out of Biden’s committee, a 14-3 vote, and was then confirmed by the full Senate in a landslide, 90-9 (with a “Yes” vote from Biden) — very much unlike Robert Bork and Clarence Thomas, two pro-life nominees.

The trust between Biden and Rudman was critical, since Souter’s position on abortion had to be dealt with stealthily. In fact, it was handled so delicately that the nominee’s true thinking was apparently unknown even to the White House.

The question was on all minds: Is Souter pro-life or pro-choice? That was the giant unknown hanging in the balance in July 1990 as President George H.W. Bush nominated this mystery man. Both sides badly wanted answers. https://tpc.googlesyndication.com/safeframe/1-0-37/html/container.html

And as fate would have it, on that same day, Joe Biden and Warren Rudman saw each other at the train station. Theirs was a moment of sheer bliss: Roe had been saved. The two senators, liberal Democrat and liberal Republican, were so overcome that they cried.

“The combined efforts of the Reagan and Bush administrations and the religious right to overthrow Roe had been defeated,” celebrated Rudman, “probably for good.”

Since the Planned Parenthood v. Casey decision — that is, since the euphoric embrace of Biden and Rudman in Wilmington — tens of million more abortions would occur in the United States. Today, the death count is more than 60 million.

The two men were so jubilant, so giddy, that Rudman said onlookers thought they were crazy: “But we just kept laughing and yelling and hugging each other because, sometimes, there are happy endings.”

And now, in 2020, Joe Biden envisions another happy ending. The Catholic presidential candidate is hoping that Catholics vote for him on Nov. 3. If so, he’ll pay them back by placing as many David Souters on the Supreme Court as he can muster, quite possibly even by packing the court. As Joe knows, he must save Roe. The Catholic politician helped keep it from being overturned in 1992, and he will assuredly continue to do so.

In Poland, Clash Erupts Between Cu...