Who is Chen Guangcheng? Chinese human rights activist to speak at RNC 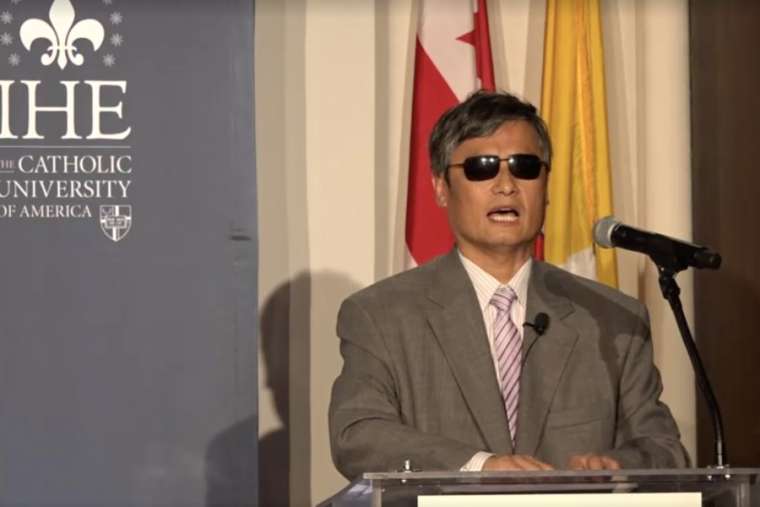 Who is Chen Guangcheng? Chinese human rights activist to speak at RNC

One of the featured speakers at the Republican National Convention on Aug. 26 will be Chen Guangcheng, a Chinese lawyer and human rights advocate who has been an outspoken critic of the Chinese government— particularly its policy of forced abortions and sterilizations.

Chen grew up in extreme poverty in the Chinese countryside in the 1970s. At the time, China was in the middle of a sociopolitical restructuring— Communist Party leader Mao Zedong’s so-called Cultural Revolution.

As he wrote in his memoir, “The Barefoot Lawyer,” he largely had a happy childhood, with his brothers teaching him how to recognize the feel and sounds of things in the world.

Chen lost his sight following an illness when he was five months old. Over the years, he had several operations done to try to help him regain his sight, but none were successful.

His mother and father worked extremely hard. He says his mother would work all day in the fields, and yet often would only earn enough to put food on the table for her children, while she herself went hungry.

As a young man, Chen entered a government school for the blind. His fighting spirit on behalf of social justice began while in school— on one occasion, he advocated for a classmate whom a teacher had assaulted and beaten while drunk. Thanks to Chen’s advocacy, the teacher was forced to apologize.

Chen later launched a campaign to give free bus fare to the blind. At the time, there were laws on the books in China to provide services and accommodations for the blind and disabled, but in practice, these were rarely enforced. Chen spoke out in protest, urging the government to enforce the laws and treat disabled people fairly.

Chen says he faced staggering prejudice from almost everyone he encountered, because of his disability. This included when he got married— his fiancee’s parents objected to the marriage because Chen was blind.

Still, Chen was able to study law and as a lawyer, he uncovered the infamous and brutal forced abortion practices under China’s one-child policy.

China’s one-child policy was imposed in 1980 in an effort to curb population growth, as China’s population neared 1 billion. Families—with very few exceptions— were not allowed to have more than one child. Women who had more than one baby could be punished. And, especially in rural areas, the government forced women to be sterilized, and to have abortions.

Under the policy, the Chinese Communist Party (CCP) subjected at least 130,000 people to forced abortions or sterilizations. Experts have estimated that, all told, the policy prevented some 400 million births. It was replaced by a two-child policy in 2015.

“Under the name of the Communist Party, the CCP was dragging pregnant women out of their homes, stuffing them in vehicles— sometimes without even putting on clothes— and taking them to reproductive planning clinics for forced abortions, where they would give them an injection to kill the baby and then induce it out,” Chen told CNA in February 2019.

“If they couldn’t find these [pregnant women], they would grab their relatives and family members.”

Chen began educating poor Chinese farmers on their rights, and filed a class-action lawsuit against the Family Planning Commission office in Linyi, China on behalf of several families who had suffered under the one-child policy. He also called an American reporter from Time magazine and invited him to come and report on the abuses.

County officials sent a squad of 200 authorities to capture him in Sept. 2005, placing him briefly under house arrest before a formal arrest in June 2006. He says after his arrest, he was hustled off to a so-called “black jail” – an extralegal detention center run by security forces. He says he was subjected to maltreatment and torture there.

Chen would eventually be charged with “overbirthing,” because he and his wife had a second child in defiance of the one-child policy. He was also charged with providing information to foreigners, because he had given an interview to the Washington Post.

Following his arrest, he says the Chinese government sent a team of 50 people to his village to spread propaganda and lies about him, telling everyone he was a foreign spy.

In April 2012, in a dramatic escape, he slipped past the guards and scaled a wall in the middle of the night, breaking his foot in the process. He crawled beside a river, making his way out of town. Within hours, Chen met his nephew in a location they’d arranged before the escape, who drove him more than 300 miles to the US embassy in Beijing.

With the help of New Jersey Congressman Chris Smith, Chen was granted asylum in the United States in 2012 and has lived in the Washington D.C. area with his family since then.

“Since Chen made it to the United States, it’s actually gotten worse in China under the current president. The religious freedom issue has gone from unconscionable to worse, which some thought could never happen,” Congressman Smith told CNA in February 2019.

Chen hasspoken out continuallyabout the Communist Party’s abuses, including itspersecution of Christiansand itsauthoritarian approachto Hong Kong. He says many of his fellow human right activists are still imprisoned or trapped in China.

Chen is a Distinguished Visiting Fellow at The Catholic University of America in Washington, D.C. Though Chen is not himself a Christian, he told CNA last year that he supports freedom of thought and religion for all people.

In the midst of the coronavirus pandemic, Chen has sharply criticised the Communist government’s authoritarian response and the party’s claims that it has the coronavirus under control.

“There is nothing about the CCP’s numbers that are believable,” Guangcheng said in April.

“What people are calculating is that roughly 700,000 may have died in China—in terms of people who have been infected, no one knows the numbers.”

He has also claimed that the CCP has been using the crisis caused by the pandemic to crack down on dissent, detaining human rights activists at separate “so-called quarantine sites.”

Chen also has been critical of theVatican’s September 2018 dealwith Communist China on the appointment of bishops, calling it “a slap in the face to millions of Catholics and other faithful religious people in China who have suffered real persecution under the CCP.”

“I grew up under this Party-State system and personally experienced the Communist Party’s violence and brutality, and I have known and worked with countless individuals in China who have been persecuted for their beliefs,” Chen wrote during Nov. 2018.

“I am sure that the active members of underground churches in China who have persevered against crippling persecution for so long can only feel betrayed,” he continued.

Chen has said that he believes China can realize modern, civilized, democratic society, with the rule of law, respect for human rights, and freedom of information.