Who Is the Antichrist? In 4 Prophetic Messages, St. John Henry Newman Tells Us What to Watch For 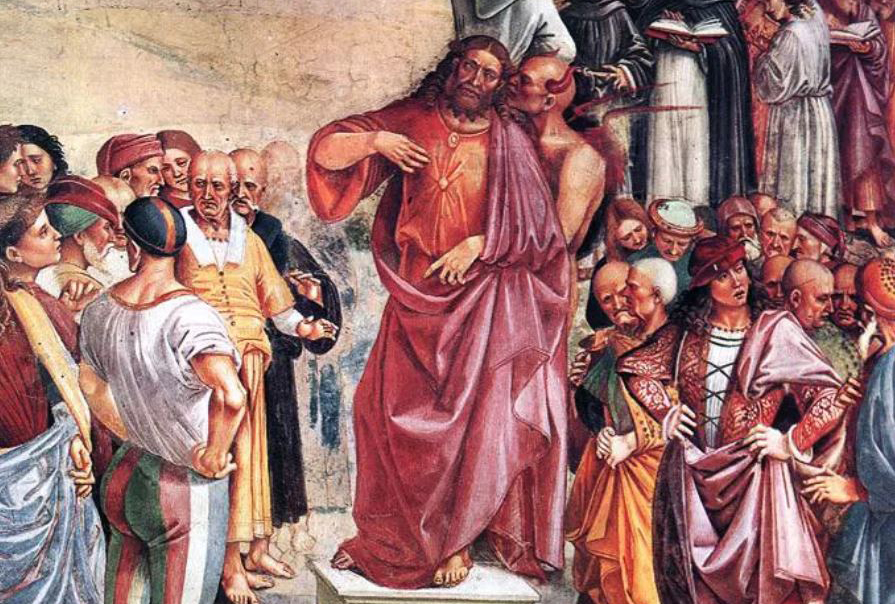 Who Is the Antichrist? In 4 Prophetic Messages, St. John Henry Newman Tells Us What to Watch For

Newman’s insights into what the future might hold for the Church and world take on new relevance considering the world’s wide road in the 21st century.

St. John Henry Newman gave four sermons on the Antichrist that are all grounded in the teachings of the Bible and the Fathers of the Church. He delivered this look into the not-so-distant future more than 180 years ago, but his insights sound as if they were written and preached in today’s times.

“Times of the Antichrist” was the title of the first sermon. Here as in the rest, Cardinal Newman follows the ancient Fathers who were not too far removed from the apostles — men like Sts. Irenaeus, Hippolytus and Jerome. Their agreement, and weight of authority, are reasons to esteem their insights.

In each of the sermons Newman readily refers to various Scripture passages and clearly refers to what Jesus said. He weaves together the prophecies of the end times in the visions in the Books of Daniel and Revelation, plus in sections from the epistles.

Newman clearly states that none of the interpretations are his own.

He begins with the signs of the second Advent, said “to be a certain frightful apostasy, and the manifestation of the man of sin, the son of perdition — that is, as he is commonly called, Antichrist. Our Saviour seems to add, that that sign will immediately precede Him, or that His coming will follow close upon it (Matthew 24).”

St. Paul in 2 Thessalonians 2 (about Christ and the Lawless one) explains that there is a restraining power holding back the lawless one from being revealed until that restrainer is removed for a sort time. Newman says the ancients considered the Roman Empire the restrainer, but while the empire was seemingly destroyed or dismantled he notes, in view of the prophecy in Thessalonians, that the Roman Empire still existed in some form in Newman’s own day.

In a sermon to follow he focuses on one of those forms only slightly removed from his own day — the French Revolution, which persecuted religion and enshrined and worshipped Liberty and man.

But the Antichrist will be a single person. It is said there will “come a falling away, and the man of sin will be revealed (2 Thessalonians 2:3),” he writes. “In other words, the Man of Sin is born of an apostasy, or at least comes into power through an apostasy, or is preceded by an apostasy, or would not be except for an apostasy. So says the inspired text: now observe, how remarkably the course of Providence, as seen in history, has commented on this prediction.”

Newman recognizes a falling away from religion in the most civilized parts of the world even in his own day, “Is there not an opinion avowed and growing, that a nation has nothing to do with Religion; that it is merely a matter for each man’s own conscience?” It certainly sounds like the relativism of our day.

Newman continues: “Is there not a vigorous and united movement in all countries to cast down the Church of Christ from power and place? Is there not a feverish and ever-busy endeavor to get rid of the necessity of Religion in public transactions? … an attempt to educate without Religion? [Our own public schools, college, and universities?] … an attempt to supersede Religion altogether, as far as it is external or objective, as far as it is displayed in ordinances, or can be expressed by written words — to confine it to our inward feelings, and thus, considering how variable, how evanescent our feelings are, an attempt, in fact, to destroy Religion?”

Scripture warns us: “What fellowship hath righteousness with unrighteousness, and what communion hath light with darkness? Wherefore, come out from among them, and be ye separate (2 Corinthians 6:14, 17).”

“The Religion of Antichrist” was the next sermon.

He also points out that both Irenaeus and Hippolytus interpret the number of the beast as the word Latinus, or the Latin king, and quotes how they envision him as the head of the restored Roman Empire.

Although all the expectations he’s detailed so far may be right or wrong, says Newman, there is still much practical use in speaking about these things in light of what was going on his day and have obviously grown enormously worse. His words are suited to today as he continued and concludes, “in the present state of things, when the great object of education is supposed to be the getting rid of things supernatural, when we are bid to laugh and jeer at believing everything we do not see, are told to account for everything by things known and ascertained, and to assay every statement by the touchstone of experience, I must think that this vision of Antichrist, as a supernatural power to come, is a great providential gain, as being a counterpoise to the evil tendencies of the age.”

“The City of Antichrist” followed as the third sermon.

Newman looks at what in the prophecies have been fulfilled and which yet remain to be fulfilled. He shows how the Roman Empire did break up, yet it’s difficult to say whether it’s gone totally because it might still exist “in a mutilated and decayed state … if this be so, then it must one day revive.”

With details after details, plus Scripture references, Newman shows how the Roman Empire was greatly punished through the Biblical sword, famine and plagues, but wasn’t totally demolished as of yet, despite all the plagues, the devastation for the barbarians, and the splintering into other nations.

Why not yet? Because the “Church dwelt in Rome, and while her children suffered in the heathen city from the barbarians, so again they were the life and the salt of that city where they suffered. … What a wonderful rule of God’s providence is herein displayed which occurs daily! — the Church sanctities, yet suffers with, the world — sharing its sufferings, yet lightening them. In the case before us, she has … suspended, to this day, the vengeance destined to fall upon that city which was drunk with the blood of the martyrs of Jesus. That vengeance has never fallen; it is still suspended; nor can reason be given why Rome has not fallen under the rule of God’s general dealings with His rebellious creatures, and suffered (according to the prophecy) the fullness of God’s wrath begun in it, except that a Christian Church is still in that city, sanctifying it, interceding for it, saving it … perhaps through divine mercy it may be procrastinated even to the end, and never be fulfilled.”

Newman also notes that heathen Rome may be a type of some other great city, or maybe of a proud and deceiving world, or all the world’s great cities together and to their ruling “avaricious, luxurious, self-dependent, irreligious spirit.”

He continues: “We are warned against sharing in her sins and in her punishment — against being found, when the end comes, mere children of this world and of its great cities; with tastes, opinions, habits, such as are found in its cities; with a heart dependent on human society, and a reason molded by it — against finding ourselves at the last day, before our Judge, with all the low feelings, principles, and aims which the world encourages; with our thoughts wandering (if that be possible then)…after vanities” or rising “no higher than consideration of our own comforts, or our gains; with a haughty contempt for the Church, her ministers, her lowly people; a love of rank and station, an admiration of the splendor and the fashions of the world, an affectation of refinement, a dependence upon our powers of reason, an habitual self-esteem, and an utter ignorance of the number and the heinousness of the sins which lie against us.”

Woe to us if we are.

“The Persecution of Antichrist” is the final sermon.

Right up front, Newman looks to Scriptures to remind us of Our Lord’s Beatitudes: “Blessed are they who are persecuted for righteousness’ sake, for theirs is the kingdom of heaven” (Matthew 5:10), hinting that the Church begins and will likely end in persecution.

“He recognizes her as His own — He framed, and He will claim her — as a persecuted Church, bearing His Cross,” says Newman as he reminds of Matthew 24:21, 2Thessalonians 2:9-11 and Revelation 13:13-14, saying it will be well for Christians because the days will be shortened.

“[S]urely it is profitable to think about it, though we be quite mistaken in the detail,” he advises. “For instance, after all perhaps it may not be a persecution of blood and death, but of craft and subtlety only — not of miracles, but of natural wonders and powers of human skill, human acquirements in the hands of the devil. Satan may adopt the more alarming weapons of deceit — he may hide himself — he may attempt to seduce us in little things, and so to move Christians, not all at once, but by little and little from their true position.

“We know he has done much in this way in the course of the last centuries. It is his policy to split us up and divide us, to dislodge us gradually from off our rock of strength. And if there is to be a persecution, perhaps it will be then; then, perhaps, when we are all of us in all parts of Christendom so divided, and so reduced, so full of schism, so close upon heresy. When we have cast ourselves upon the world, and depend for protection upon it, and have given up our independence and our strength, then he may burst upon us in fury, as far as God allows him. Then suddenly the Roman Empire [which appears to be smoldering in various guises somewhere] may break up, and Antichrist appear as a persecutor, and the barbarous nations around break in. But all these things are in God’s hand and God’s knowledge, and there let us leave them.”

His Advice in These Analyses?

Whether correct or somewhat off the mark, Newman concludes that such meditation may do us well.

“It will act as a curb upon our self-willed, selfish hearts, to believe that a persecution is in store for the Church, whether or not it comes in our days,” he asserts.

“Surely, with this prospect before us, we cannot bear to give ourselves up to thoughts of ease and comfort, of making money, settling well, or rising in the world.

“Surely, with this prospect before us, we cannot but feel that we are, what all Christians really are in the best estate …pilgrims, watchers waiting for the morning, waiting for the light, eagerly straining our eyes for the first dawn of day — looking out for our Lord’s coming, His glorious advent, when He will end the reign of sin and wickedness, accomplish the number of His elect, and perfect those who at present struggle with infirmity, yet in their hearts love and obey Him.”

It’s our duty, as the Lord shows us in the Our Father, to pray, Thy kingdom come, They will be done, on earth as it is in heaven.

California Cancels the Saint Who H...